My Dog is Eating His Vomit - Should I Be Worried?

Understanding why your dog is vomiting is key. 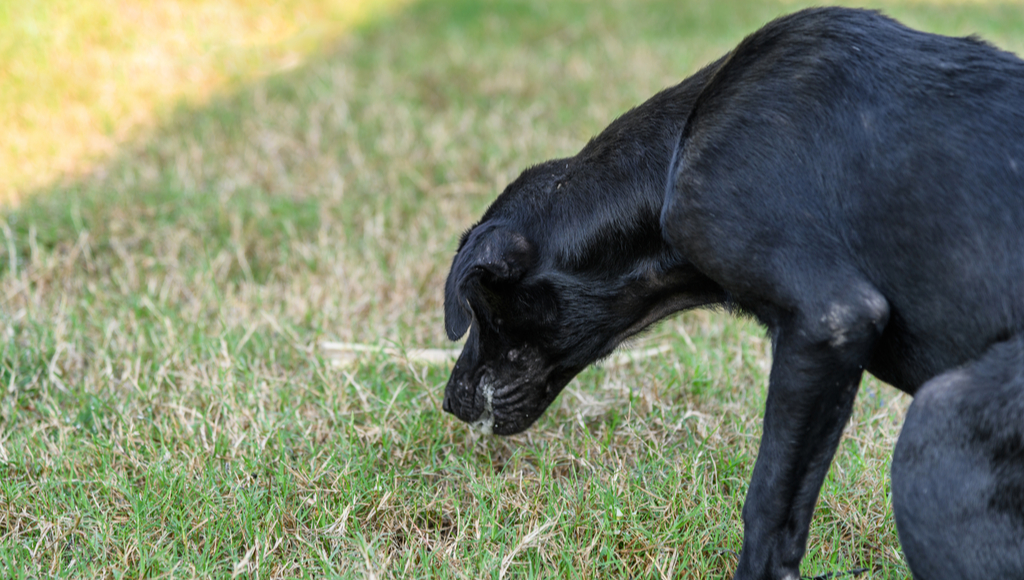 Granted, there are several things dogs do that inspire this reaction, but few are as gag-inducing as seeing your dog gobbling up his own vomit. Aside from the gross factor, is this behavior something you should worry about? As with most questions in animal health, the only definitive answer is, "It depends." Knowing why your dog is vomiting is key to knowing if it's harmless for him to re-ingest it.

Sometimes your dog may not actually be vomiting. Although it may not seem so, there is a difference between your dog vomiting stomach or intestinal content and regurgitating undigested food.

Vomiting is involuntary. Your dog's body will expel anything that the brain detects as an unusual substance or toxin. If his stomach or small intestine is overfilled, vomiting may result. Medical issues, such as ulcers and infections, can induce vomiting, as can certain medications. Your dog will heave before vomiting, contracting his abdomen and showing effort and apprehension during the process. When the vomit contains food, it will be partially digested and appear as a yellow liquid.

Regurgitation, on the other hand, occurs when your dog expels food from his esophagus, before it gets to the stomach and intestines. Your dog won't exert much effort when regurgitating food. He'll simply lower his head and the food will come out. Unlike vomit, regurgitated food is generally undigested and covered in mucus, thicker than the liquid accompanying stomach contents. A dog regurgitates when he's eaten his food too quickly and the pieces are too big for his esophagus or when he has a medical condition such as an obstruction or inflammation of the esophageal lining. Sometimes, there's no known explanation for regurgitation.

So, when should your dog's vomiting or regurgitation concern you?

Well-known as indiscriminate eaters, dogs often ingest things they shouldn't. Vomiting is a natural reaction to this. If your dog vomits a couple of times in a day and then stops, he's likely ejected whatever he ate that bothered him. Contact your veterinarian if the vomiting is more frequent, lasts longer, contains blood, or is accompanied by dehydration, a lack of energy or diarrhea.

If your dog eats too quickly, he could regurgitate often. If his consumption rate isn't a problem, there could be an underlying issue with your dog's esophagus. Look for a loss of appetite, drop in weight, frequent and difficult swallowing, lethargy, and coughing or throat clearing. Any of these symptoms should prompt a call to your vet.

Making two meals out of one

You probably learned as a child that birds regurgitate food to feed their young. You may be surprised to know that mother dogs do this for their puppies, too. As part of the weaning process, mother dogs will chew solid food and regurgitate it for puppies to eat. Hence, many dogs learn at a young age that eating food that's been thrown up is okay. It makes a behavior that humans find disgusting perfectly normal for dogs.

Dogs who frequently regurgitate because they eat too fast often go right back at the material to eat it again. Because it's now softer, the food more easily passes through the esophagus to the stomach. To you, the idea of eating something you threw up is unthinkable. But dogs simply see it as food that smells good. To avoid the problem, you must slow down your dog's intake of food. One option is to feed your dog smaller amounts more often. He's less likely to eat as fast when he doesn't have a lot to get through. If it's pure excitement about eating, try a dish designed to slow him down. They have mazes or rubber protrusions that force your dog to work a little harder to get at the kibble. If you have multiple dogs, feed them away from each other to prevent a sense of competition for the food. Proximity can cause anxiety, resulting in your dogs eating as fast as they can so the other can't get their food.

Ultimately, eating regurgitated food isn't harmful to your dog. It's messy and inconvenient for you, but unless the cause is medical, there isn't any danger associated with it.

Vomit is a different story. Because vomiting is often caused by ingesting something he shouldn't have, your dog should always be prevented from eating the digested material. He would simply be re-ingesting the toxin or bad food that caused the vomiting in the first place. Vomit also contains a high level of acid which can damage your dog's tooth enamel and esophageal lining.

While eating regurgitated food is unlikely to cause harm, it's best to remove your dog from any food that he brings up, whether by vomit or regurgitation. The consistency of preventing him from re-ingesting the food may help him learn not to eat potentially dangerous vomit if you aren't right there to direct him away from it. Luckily, vomiting normally involves some build-up - the retching, stomach noises - that alerts you to what's about to happen. But if your dog vomits when you aren't home, any potential deterrent to eating it is crucial.

As with any troubling behavior, reach out to your vet to confirm if there is a medical condition behind it. Close observation of your dog's behavior and what leads to it will help your vet determine the underlying cause. Saving a portion of the material also allows the vet to test it and find exactly what it is. Taking a video of an episode can also assist diagnosis.

How Do I Know If My Dog or Cat Has Dental Problems?

Why Does My Dog Kick Behind Him After He Poops