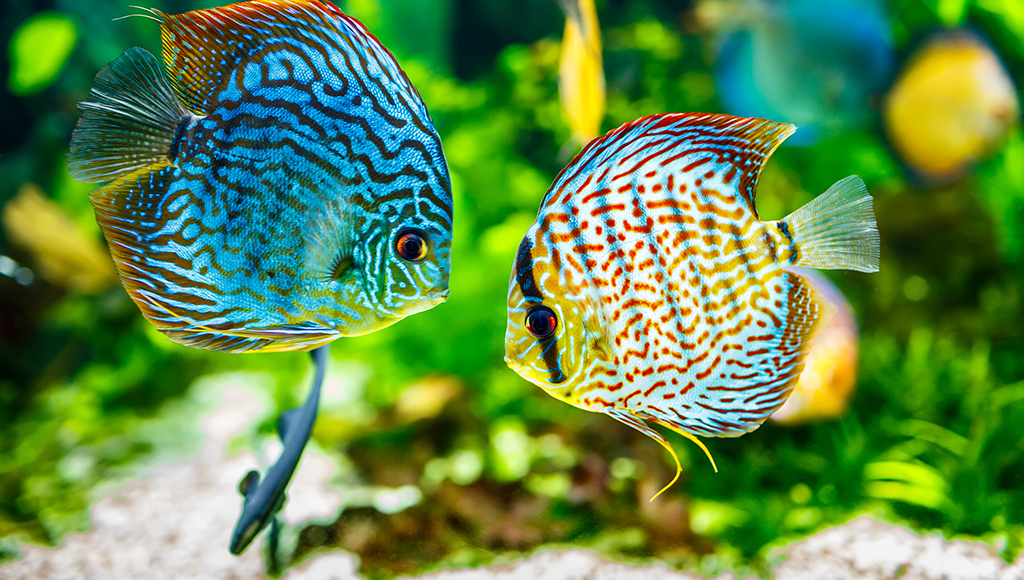 Tropical fish with all their beautiful colors, shapes and sizes can be great fun to watch, and are a popular pet for people of all ages. However, anyone that keeps fish for any period of time will eventually have to deal with "ich". Ich (pronounced ick) is the most common disease of all freshwater and marine aquarium fish. Many hobbyists consider this disease to be just a common nuisance but the reality is that ich is probably responsible for more fish deaths than just about any other disease. There are several effective treatments for ich, but if they are not administered correctly, they can cause serious problems with your fish and tank inhabitants.

Ich is a protozoan disease that is often called 'white spot disease.' The scientific name for the disease is ichthyophthiriasis and the cause is Ichthyophthirius multifiliis. It is wide spread in all freshwater fish but appears to be more common in aquarium fish, possibly due to the closer contact and stress involved with aquarium species.

Why do fish get ich?

Ich is so widespread that many experts feel that it is present in the environment of most aquariums, especially in larger holding tanks, rearing ponds of breeders, collectors, and wholesalers. In fact, just about every aquarium fish will come into contact with this protozoan at several times in its life. Because it is so widespread, most fish have developed a good immune response against the disease to allow them to fight off the protozoan infection before it ever causes any symptoms. Captive fish that develop ich usually get the disease when their immune systems are not functioning as well as they should be because of stress. We know that stress lowers the immune response and when fish are stressed that is when ich is most prevalent.

There are many causes of stress in a fish's life, many of which can be made worse or better by the owner. Water temperature, water quality, tank inhabitants, improper diet, and a variety of other factors all contribute to stress, but one of the most severe causes of stress occurs during shipping and handling of a new fish. Whether coming from the wild or farm-raised, the handling and shipping of the fish from their origin to a wholesaler, then to a retailer, and finally to your home is extremely stressful. With the widespread prevalence of ich, it is no wonder that many newly purchased fish are affected.

Want to learn how to save on ich treatment? Click here

The symptoms of ich are very evident and usually include the following symptoms:

Infected fish are covered to various degrees with small white spots on the body and gills. In some infections, the ich organisms will only be found on the gills. Unfortunately, small occurrences often go unnoticed before they progress to a more serious stage. As the disease progresses, severe infestations may occur and are easy to spot. The disease may then cause respiratory distress, severe agitation, loss of appetite, and eventually death. However, ich won't remain unnoticed for long. Like a bad penny, it will be back with a vengeance.

This disease is often identified based upon history, symptoms, and the presence of white spots, but if there is any question, it can be identified microscopically. The life cycle of Ichthyophthirius is complicated, but very important in understanding the treatment and prevention of ich. Once the ich protozoan attaches to the side of the fish, it begins feeding on the skin and tissue causing irritation. The fish's body begins to wall off the parasite to try to limit its damage. The protozoan continues to move around in the cyst feeding and growing, while the body continues to further encapsulate and wall it off. This encapsulation by the body is one of the reasons that ich is so difficult to treat during this stage of the disease, because medications cannot penetrate through the wall of the cyst to reach the ich parasite. During this stage, the ich protozoan is called a trophozoite. The trophozoite eventually matures and is termed a "trophont." It will burst through the cyst wall and then fall to the bottom of the aquarium. It then begins to divide into hundreds of new ich-infecting units called tomites. This stage is very temperature-dependent within its capsule, with the fastest replications occurring at warmer temperatures near 78-80°F. At optimum temperatures, the replication will be completed in about 8 hours. At lower temperatures, the replication takes longer making the treatment time for eradication much longer.

Once the replication is complete, the trophont bursts and releases the newly-formed tomites into the water. The tomites are motile and swim around the tank searching for a fish to attach to. Once they attach to a fish, the cycle will start over again. It is during this stage that ich is most susceptible to treatment. Many of the available medications will kill the tomites, thereby stopping the cycle of ich in your tank. It should be noted that these tomites will only survive for 48 hours, if they do not find a fish to attach to. These tomites will also attach to plants, filter material, etc. So if you move a plant from an infected tank into a clean tank, you have just infected the clean tank with ich. Depending on the water temperature, the whole cycle can take from 4 days to several weeks.

Now that we understand the life cycle of freshwater ich, many of our treatment recommendations make more sense. Because the life cycle is temperature-dependent and the ich can only be killed in the tomite stage, we will want to raise the tank temperature to 78-80°F over 48 hours to speed the cycle of tomite formation and release. Theoretically, if the cycle takes four days to complete at this temperature, then the treatment should be complete in 4 days. On the other hand, if the temperature is much colder, for example at 60°F, the treatment would need to last for several weeks or longer.

Since we understand that we cannot kill ich while it is on the fish, we know that moving a fish to a quarantine tank to treat will not solve the problem in the main tank. The time to use a quarantine tank is before a new fish is introduced into a display tank. If a fish in a tank has ich, you must assume that the entire tank is now contaminated with ich and must be treated.

Another way to get ich out of a tank is to remove all of the fish. Since we know that the tomites can only survive for 48 hours without attaching to a fish, if we remove all of the fish and then raise the temperature to 80°, the existing ich in the tank should be dead after 2 days. To be safe, wait 4 days before returning the fish to the tank. But remember, you will need to treat the tank that the fish are moved to, otherwise, fish entering that tank could become infected.

Remember, we are treating the tank, not the fish, so all effective treatments are designed to kill the trophite form of the disease while it is in the tank. The mature ich organisms that cause the problems on the fish do not die from treatment, but fall off in a couple of days during their normal life cycle and then their offspring die from the treatment in the water.

Want to learn how to save on ich treatment? Click here

Some of the best treatments historically have been formalin or malachite green, or a combination of the two. Copper, methylene blue, and baths of potassium permanganate, quinine hydrochloride, and sodium chloride have also been used but do not appear to offer an advantage over the more readily available formalin and malachite green products.

When using formalin, make sure to use recently purchased formalin. Formalin that is stored for long periods of time can convert to paraformaldehyde, which can be toxic to fish. An indicator that this has occurred is the formation of a white precipitate in the bottle. Malachite green may also stain some decorations and silicone to a green color and may be toxic to piranhas, neons, sunfish, and some scale less fish, if given at the recommended dose. For these fish or other sensitive species, they should be treated at half strength and monitored carefully for signs of distress.

While we rarely recommend treating an entire tank for a disease, ich is an exception. Make sure to follow individual label directions, and remove the carbon from your filter and shut off any UV sterilizers or protein skimmers during treatment because they will inactivate or remove any medications that are added.

Ich is a very common disease and if your fish get it, you are going to end up having to treat the entire tank. Therefore, it is a much easier disease to prevent than treat, and the following is a list of suggestions for helping to prevent ich in your tank:

While ich may be the most common disease in aquarium fish, it does not have to infect your tank. By following these preventive guidelines and promptly treating any infected fish, you can greatly reduce the damage that can be caused by this deadly disease.

Meet the Pea Puffer! A Bite-Sized Puffer Fish with a Big Personality

Benefits of a Planted Aquarium