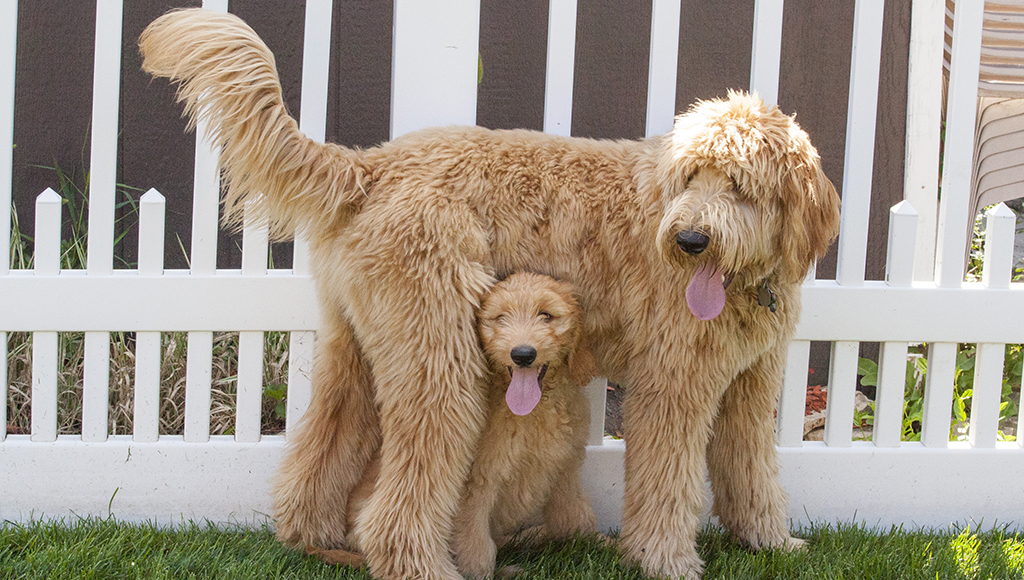 What is a Designer Dog?

Is there a difference between a designer dog and a hybrid dog? This sounds confusing, but it actually isn't. A "designer" dog (as the media has labeled them) is a cross between two purebred dogs. A purebred dog is one that has been bred over many generations to breed true: every puppy looks and has the same temperament and characteristics as another. In most cases a standard is written and breeders must follow this written standard. Only dogs which make the written standard are to be bred.

Purebred dogs are beneficial in that when you buy a purebred dog you know exactly what you are getting. You know how big your puppy will grow and you basically know its temperament and what kind of care it will need. You know the dog's limits; whether it is capable of agility, hunting, search and rescue, police work, herding, flock guardian or just simply a companion dog. You will have a good idea if the dog will be good with children, if they will have a tendency to wander or if they will stick close to home. You will be able to assume if your dog will like or fear strangers.

When one breeds purebred dogs, great care must be taken to insure the bloodlines do not become too thin. Even with all the best DNA testing available, genetic problems can occur; however, with the proper testing these problems can be greatly reduced. To give you a simple analogy, let's say there was a law passed that stated only people with red hair and green eyes with a high IQ could have children, with the end goal that everyone in the USA will be smart with red hair and green eyes. If this were to happen, as you can imagine, our gene pool would eventually become thin, and many genetic problems would occur. This is why it is very important to ask purebred dogs breeders what types of genetic testing they perform.

The word 'hybrid,' when referring to genetics, means the offspring of genetically dissimilar parents or stock, especially the offspring produced by breeding plants or animals of different varieties, species, or races. In general the word means, 'something of mixed origin or composition.' Hybrid dogs, or designer dogs as some call them, are becoming quite popular. A hybrid dog is not a BREED, it is a hybrid, which means it is a mix of more than one purebred dog.The best way to determine the traits of a mixed breed is to look up all breeds in the cross and know you can get any combination of any of the characteristics found in either breed. If everything about both breeds matches you and your family's personality and lifestyle, than you can most likely assume this cross will work for you. If there is ANYTHING about either breed in the cross that you do not feel matches what you are looking for, avoid that cross. Do not assume or take the chance that only the good characteristics will emerge. You may be in for a big surprise and it is not fair to the puppy to chance that. If you do not feel the temperament of one of the purebreds in the mix is suited for your lifestyle, then that hybrid dog is not for you. Do not take a gamble that the puppy or dog will turn out like the other breed in the mix. Choosing a dog simply for its looks is a foolish way to choose a dog.

Despite the unpredictability of hybrids in achieving the particular aims of the breeder, they still make excellent pets. Just as mutts from the pound can make some of the best pets around, so can hybrid designer dogs. Designer dogs have an advantage over a mutt from the animal shelter: you know the ancestry of the designer dog and can make your own judgment of the health and temperament of the parents. There's no guarantee that the pups will inherit any particular trait from either parent, but as long as the parents and grandparents are generally healthy and have a good temperament, it's a pretty sure bet that their pups will be too.

On the other hand, if you want a designer dog purely for health reasons, you might want to check with your local pound or animal shelter. The dogs available for adoption at the pound are often indistinguishable from expensive designer dogs, and are likely to have just as much "hybrid vigor" as any designer dog. Adopting a dog from the shelter may also save you hundreds or even thousands of dollars.

It's commonly believed that hybrid dogs are usually healthier than purebreds and suffer from fewer genetic problems, such as hip dysplasia. This is indeed often the case — breeding among purebreds can tend to prolong and exacerbate existing genetic tendencies in the purebred line, while mixed breeds are less likely to have two parents with the same genetic predispositions.

However, that doesn't mean that all mutts are guaranteed to be healthier than purebreds. A mutt, hybrid or designer dog that is bred from parents who are both genetically predisposed to hip dysplasia, for example, is just as likely to develop the problem as a purebred with parents that are genetically predisposed. If you're considering acquiring a hybrid or designer dog for health reasons, be sure to check into the health of the parents, as well as their parents, to be sure you're not acquiring a dog with the same predisposition to inherited health problems as a purebred would be.

It is also important to be aware that not all designer hybrid dogs are bred 50% purebred to 50% purebred. Many hybrid breeders will breed second-generation, backcross or multi-generation crosses: for example, a Labradoodle bred with a Goldendoodle or a Goldendoodle bred with a Labrador. Such multi-mixing makes for even less predictability with respect to the physical and temperamental traits of the resulting puppies. It is very common for breeders to breed multi-generation crosses.

What's the Difference Between a Designer Dog and a Mutt?

Generally, a mutt is of uncertain ancestry. A designer dog has documented purebred ancestry, and one knows for sure exactly what its bloodline is. The American Canine Hybrid Club (ACHC) is the leading registry for designer dogs. The ACHC will be able to provide a good source of information about hybrid dogs.

Hybrid dogs can still have genetic problems because you are still crossing two first generation dogs; however, the percentage of hybrid dogs with genetic problems is much lower than purebred dogs because the gene pool is mixed. Breeders who breed purebred to purebred creating a first generation hybrid believe in the heterosis effect and hybrid vigor. Vigor means, "Physical or mental strength, energy or force." Unlike purebred dogs, when you adopt a hybrid, you do not know exactly what the temperament, size or exact look of the dog will be.

Are Hybrid Dogs Recognized by the American Kennel Club?

The American Kennel Club (the well-known AKC), is generally considered as the final arbiter of dog breeds and breed standards. The AKC does not recognize designer dogs as breeds, for a variety of reasons. The ACHC, or American Canine Hybrid Club, specifically recognized crossbreed hybrid dogs produced from purebred ancestry.

Some of the most common designer dogs include the following:

One unfortunate consequence of designer/hybrid dogs is that people often get rid of them when they don't turn out like expected or desired. Dogs are not to be disposed of like old toasters when they do not perform as you wish. They are living creatures. Cross a Labrador with a Poodle (Labradoodle) and you may or may not get a dog that sheds. Most experienced breeders can give you a pretty good idea what characteristics in a pup will emerge as the puppy grows. For example, in the Labradoodle, some breeders are able to tell which coat the pup will have, the Poodle or the Labrador, but still, this cannot be guaranteed. Sometimes it is harder to tell what type of temperament the pup will take on as some characteristics do not appear until the pup is older, past adopting age.

Whether or not you choose a purebred dog or a "designer" hybrid mix, do your homework and research this subject thoroughly. Please remember that adopting a dog should be a life long commitment and not something that should be taken lightly.