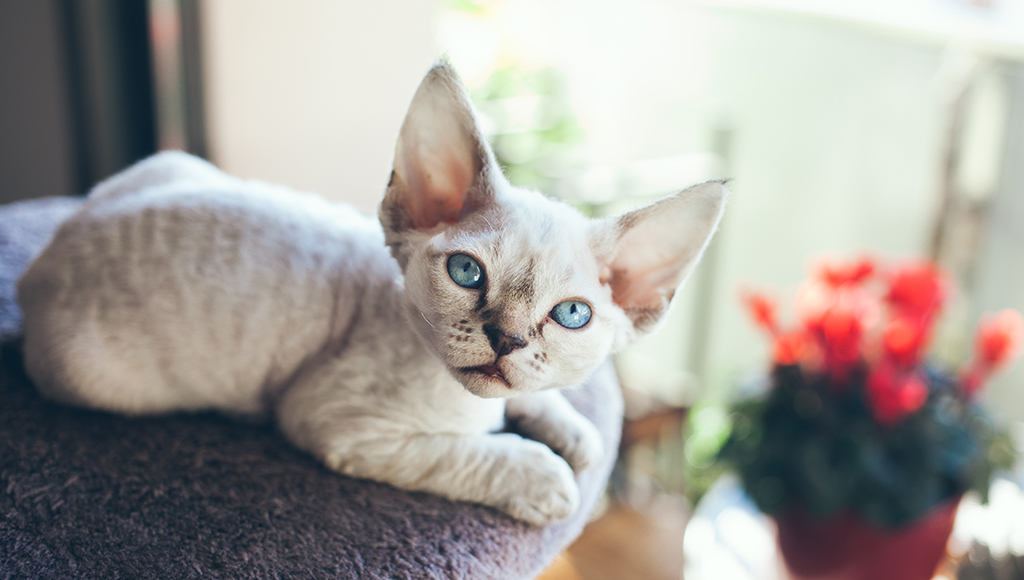 The Devon Rex is a breed of cat with a curly, very soft, short coat similar to that of the Cornish Rex. The first discovery of a Devon was in Buckfastleigh, Devon, UK in 1960, amongst a litter of kittens near a disused tin mine. Initially, scientists linked the breed with the Cornish Rex; however, test mating proved otherwise.

The Devon Rex is a medium-sized shorthair cat. The long, slender legs with dainty oval paws carry the slender body. The bone structure of the Devon Rex is medium-fine, but when lifting up the cat it is surprisingly heavy. The cat is very muscular, and the muscles are firm to the touch. The rib cage is full and deep, and the front legs are bow-legged, thus the legs appear shorter than they are.

Devons, also known as "pixie cats" or "alien cats" because of their unique appearance, are medium sized cats. Their uncommonly large ears are set low on the sides of their wide heads, and are slightly rounded. They have large eyes, and their noses are slightly upturned. Unlike most cats, their whiskers are very short and often curled to such an extent that it may appear as if they have no whiskers. Their body type is distinctly light-built. Their long, sturdy legs are well suited for long leaps, and their toes are unusually large. The head of the Devon Rex is short wedge with prominent and high set cheekbones, giving it an elf-like look.

A different mutation and gene than that of the Cornish Rex and German Rex causes the curl in Devon Rex fur, and breeding of a Devon with either of those cats results in cats without rexed (curled) fur. Devon Rex cats come in all colors and patterns, with or without white patches. The tail is long and tapered. The tail and the legs can also sport the wavy coat.

Want to learn how to save on veterinary care for your devon rex? Click here

The typical Devon is active, mischievous, playful, and very people-oriented. These cats are excellent at jumping high heights, and they will try to occupy any space large enough to admit them. With this trait, you can often find them in odd nooks and crannies of a closet, shelf, or laundry basket. Devons prefer to be in high places, and they will go to great lengths to get to the highest spot in a room.

Devons are relatively easy in terms of care. Most Devons also have one central person to whom they devote their love, and on whom they will most often lay and rub affectionately. They like to playfully nip, and love to play throughout their lives. Even as adult cats, they never seem to lose their kitten-like playfulness.

Devons are a very intelligent breed. The typical Devon Rex can be trained to walk on a leash, fetch or perform all manner of tricks usually associated most often with canines; like jump, heel and tag to name a few.

The most common trait in this breed is their endless show of affection; they have a particular penchant for being close to the head or neck of their human companions, often mounted upon the shoulder or nestled into the cranny created by the neck and shoulder of their owner when they are lying down. The Devon Rex is a faithful companion, and it will usually follow the object of their affection from room to room, waiting for the opportunity to leap onto their arms, lap, or shoulder.