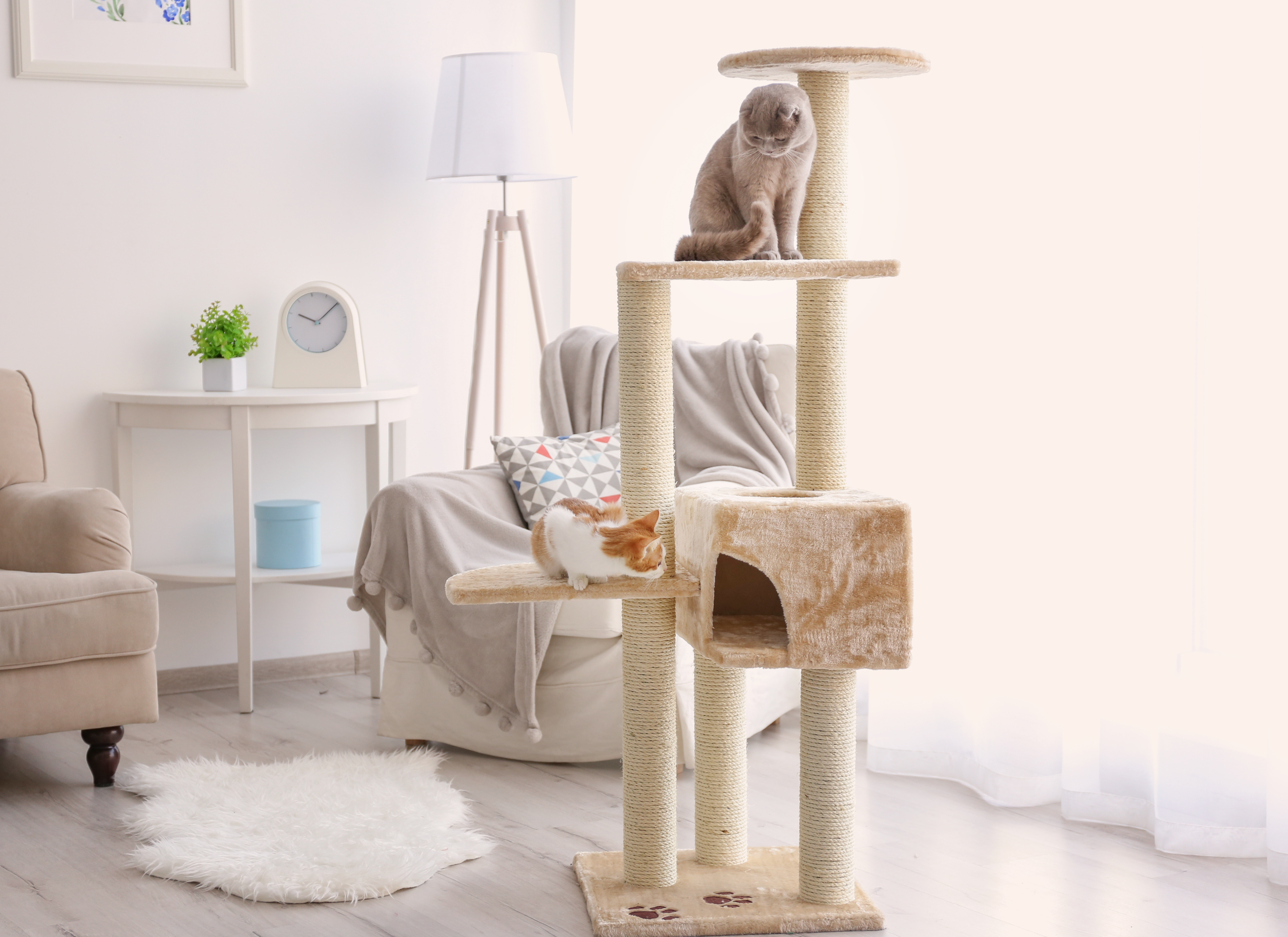 Most cats enjoy being in high places. Whether it's a high shelf, a window perch or the top of the refrigerator, your cat may feel more comfortable in the upper half of the room where he can keep an eye on the world around and below him with greater confidence.

Instinct plays a large role in determining this feline habit. Cats are tree-climbing mammals that descended from Proailurus, the first true cat. Early cats were hunters and many of them lived in the rain forests. Their claws enabled them to climb skillfully, escaping into trees for safety or climbing up high to lie in wait for prey. In other words, climbing had survival value and became hard-wired as a way of life for cats.

Our cats climb for safety and just for the fun of it. They will sprint up and down a tree, or your draperies with the same skill their ancestors used in the forest. A cat’s flexible musculoskeletal system gives them exceptional coordination and balance and enables them to jump up high. Strong muscles in the hindquarters and back enable a cat to leap several times his own length, either horizontally or vertically. A cat’s claws are as important to them for anchoring and leverage as grappling irons and crampons are to rock climber.

Watch a cat before he leaps onto a high place. He leans back and stares. He seems to be calculating angles from where he is to where he's going. Without taking his eyes from the intended spot, the cat suddenly becomes airborne, but he doesn't land with a thud. Making a graceful jump, the cat seems to hover momentarily before his paws softly touch down. Quickly, the cat makes himself comfortable, turns around a few times, tucks in his paws, and enjoys the panoramic vista from his lofty safe haven.

When summer comes around, many pet parents are eagerly opening their windows to enjoy the weather. Unfortunately, they are also unknowingly putting their pets at risk. Unscreened windows pose a real danger to cats, who fall out of them so often that the veterinary profession has a name for the complaint - “High-Rise Syndrome”. During the warmer months, it is not unusual for veterinarians see a case or two of this each week. Falls can result in shattered jaws, punctured lungs, broken limbs and pelvises, and sometimes even death. Cats have excellent survival instincts, and they don’t deliberately “jump” from high places that would be dangerous. Most cats fall accidentally from high-rise windows, terraces or fire escapes.

What Dangers are Associated With High-Rise Syndrome

Cats have an incredible ability to focus their attention on whatever interests them. A bird or other animal attraction can be distracting enough to cause them to lose their balance and fall.

Because cats have little fear of heights and enjoy perching in high places, pet owners often assume that they can take care of themselves. Although cats can cling to the bark of trees with their claws, other surfaces are much more difficult, such as window ledges, concrete or brick surfaces.

When cats fall from high places, they don’t land squarely on their feet. Instead, they land with their feet slightly splayed apart, which can cause severe head and pelvis injuries.

It is a misconception that cats won’t be injured if they fall from one or two-story buildings. They may actually be at greater risk for injury when falling shorter distances than by falling from mid-range or higher altitudes. Shorter distances do not give them enough time to adjust their body posture to fall correctly.

Remember that when cats fall from high-rise buildings, they may end up on sidewalks or streets that are dangerous and unfamiliar to them. Never assume that the animal has not survived the fall; immediately rush the animal to the nearest animal hospital or to your veterinarian. There is a 90-percent survival rate for cats who are high-rise victims if they receive immediate and proper medical attention.