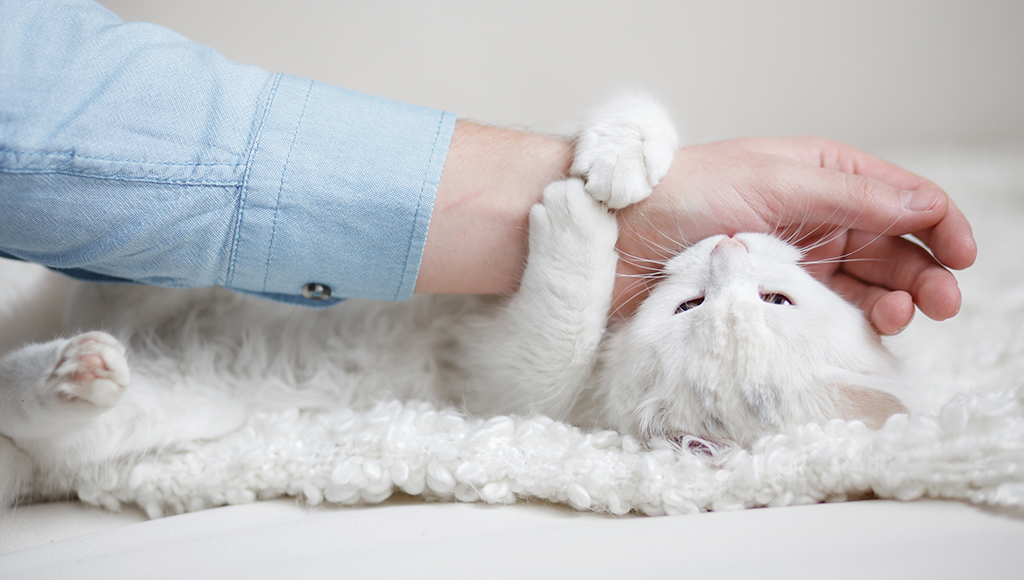 It is not uncommon to hear about a cat being removed from a home because of uncontrollable biting and/or scratching behavior. Anyone who has a cat, can describe incidents where their cat’s behavior was less than friendly, and at times could even be categorized as aggressive. While this aggressive kind of behavior is painful and frustrating to deal with, it is important to remember that cats never do anything without a reason. Cats are actually very predictable creatures, and biting and scratching are cause and effect behaviors just as most other undesirable behaviors.

There are two basic kinds of biting and scratching behaviors in cats, and both of them are often caused by our own human failings. There is “playful biting and scratching” and “defensive biting and scratching”. Before you can understand which type your cat is exhibiting, it is important to remember that biting and scratching are perfectly normal behaviors for cats. It is an important part of their early development as kittens, because it is their only means of defense, as well as their natural way of killing prey in the wild. Most people forget that cats are predators by nature, despite the fact that they have been domesticated. Before attempting to discipline your feline, it helps to understand both behaviors.

Think about the games your cat plays. When he chases a ball or mouse toy, his goal is to win the game by catching the object and controlling or defeating it. His perception is to dominate using whatever skills he has (his claws and teeth) in order to defeat and or “kill” the prey. He is not acting aggressively, but merely utilizing the only method he knows to be successful. A cat’s main form of play involves biting and scratching in "winner takes all" battles, whether with another cat, a toy mouse, or an unsuspecting human who finds he has become his cat’s plaything.

One of the first rules for human companions is "do not teach your cat that hands are toys." If you ignore this advice, those tiny claws and teeth will soon grow into razor-sharp "hooks," and you may end up bearing the scars.

Cat’s are smart and learn quickly that a pair of hands make great toys, and they will delight in the challenge of catching them no matter what they have to do. Cat’s also learn “who” is a toy. Take note of who plays with your cat and whether or not they use their hands. If a cat learns that “your hands” are not a toy, he will not perceive them as such and therefore he will not play with them. On the other hand, if you use them as a toy, he will always think of them as a plaything and may even attack them even when you are not being playful with them.

One of the most difficult moments for a cat owner is when a nice petting session (particularly on the cats abdomen) suddenly stops with a biting or clawing. Many owners mistake this as a sign that their cat does not like them or their affections. Cats may bite during one of these sessions for several reasons: most often because they are overstimulated and have simply had enough, fear or redirected aggression or they don’t feel well. Kittens usually bite simply because it is a form of play for them, but in an adult cat it clearly means they want you to stop what you are doing.

This behavior is the most confusing because it seems so sudden and unpredictable. However, from the cat’s standpoint, he’s already given you several warning signs and signals prior to biting that he’s had enough. These signals include:

If you watch your cat closely, you will learn these signs and know when your cat has had enough attention, before he becomes defensive in order to communicate his feelings to you.

Overstimulation is the most common reason for sudden changes in behavior during play. Most cats have areas they do not like to be touched, and these are usually obvious to their owners early in the relationship. Not all cats dislike having their chest or belly rubbed, or being held in a certain position, so this will vary with each cat’s personality.

Sometimes a cat suddenly becomes startled or frightened, which wil naturally change their attitude from affection to a more defensive state-of-mind. This could be something as simple as another cat entering the room, or a stranger they are unfamiliar with coming into view, or even speaking from another room nearby. If you respect your cat's apprehension and step away from him, he should move away from you with no aggressive behavior, in an attempt to protect itself. It is normal for you to see the cat return to its affectionate state shortly, or at least to a less defensive posture in a matter of seconds. However, if your previously docile cat starts biting at you when you touch a particular area that he normally has no problem with, it is a good time to schedule a visit to the veterinarian to make sure he does not have a health problem.

Minimizing the Scratching and Biting

When this aggressive behavior is inappropriate there are some things you can try to help minimize the episode:

To minimize the result of aggressive scratching, trim the claws. This should be done regularly to maintain a healthy length for hygiene and to minimize damage to their surroundings as well as themselves.

Tips to Care for Your Senior Cat