The Perfect Pet For Small Spaces

If space is limited, this might be just the right pet for you! 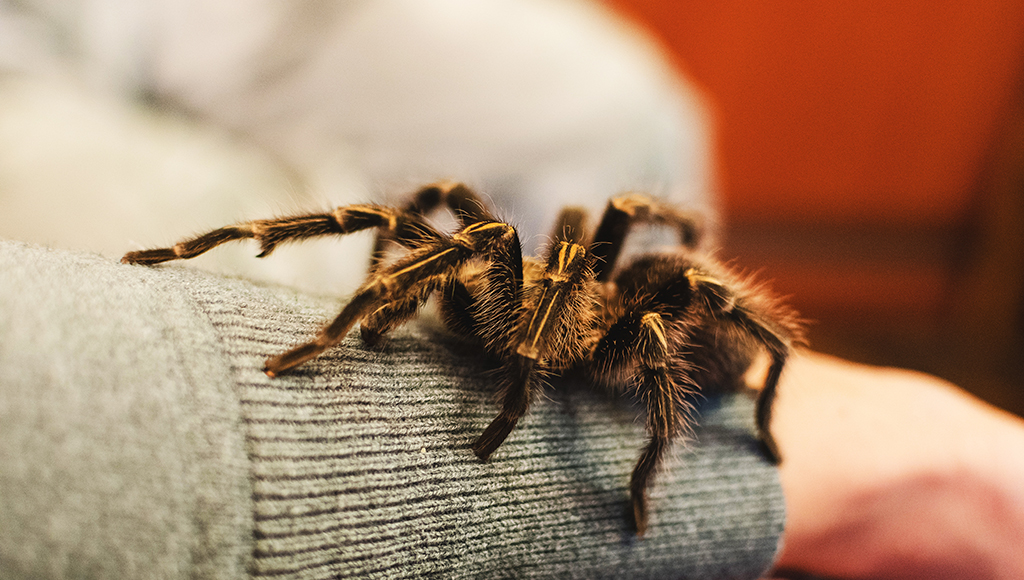 If you are looking for a pet, but don’t have the luxury of keeping a high-maintenance pet such as a dog because you are limited on living space or possibly because of restrictions where you live in an apartment or with a roommate, there is still a pet that might be just right for you. Even if you have the space, but are limited by time constraints, there is still a pet who practically takes care of itself. Even fish tanks can be difficult, since people often under-estimate the time and work it takes to maintain the tank; this particular pet might be perfect for you. What pet could possibly be this easy to care for, yet fascinating to have? Why, a spider of course! You could try a snake or one of the hardier lizard varieties, but a tarantula is far easier to house and quite fascinating to watch. Tarantulas can make wonderful pets. They are exotic, fascinating creatures that require much less attention than a dog or a cat, or even a tank of fish. Many species are hardy enough to require minimal care, and they always make great topics of conversation.

If you are serious about acquiring a tarantula for a pet, it's a good idea to do some reading beforehand on tarantula care, so that you know the proper care requirements for the species that you have chosen. Choose wisely and be aware that some species can be quite aggressive or inordinately delicate, and are not recommended for beginners. The more aggressive species are less commonly available through your local pet stores, and are generally obtained via mail order. Below is some information about the various species to help you choose:

The most common variety available in pet stores is the Chilean rose hair tarantula. They are gentle and easy to take care of. This variety is also known to have fairly mild venom, and almost never bites. Chileans also have this annoying habit of fasting for months on end, which can be most aggravating to those who are eager to watch their new pet in his environment. Still, they do make wonderful pets for beginners.

The Honduran curly hair tarantula is another species of tarantula found in pet stores. They are also gentle, incredibly docile creatures. However, Unlike the Chilean variety, these have very hearty appetites and will be more interesting to watch. Due to their ravenous appetites, they grow rather quickly too.

The Mexican blonde tarantula is yet another docile wonder. For a while, this species was not readily available for sale in local pet stores, but it has been making a comeback. Most pet stores still do not carry this variety, but it is often available via mail order.

This tarantula is not as colorful as the red knee tarantula, but they can be distinguished by the gold-colored bands on their legs. They also have impressive legspans (up to eight inches or more), but their frightening size is belied by their utterly sweet dispositions. However, because they are relatively new to hobbyists, they tend to cost more than other tarantulas.

These tarantulas tend to be on the large side. This is not a colorful species; however, their satiny black carapace gives them a sleek, elegant look. This variety is almost as large as the Chaco Golden Knee, with a legspan of up to 7 to 8 inches.

This particular variety is a bit harder to take care of than the previously mentioned species, but it's still a treasure. These tend to be a bit skittish though, and so handling them is definitely not recommended for beginners or novices. Although they do not typically bite, they are prone to running away, and like most tarantulas, they can be easily injured in a fall.

This species, along with the Chilean rose hair, is commonly used in movies and on TV. It is likewise very docile, and much more colorful than most pet store varieties. Handling it can be a bit unpleasant simply because its hairs tend to be a bit irritating to human skin. In addition, due to its popularity, it has become a restricted species; that is, harvesting them from the wild has been made illegal. As a result, they tend to be on the expensive side.

Want to learn how to save on veterinary care for your spider? Click here
Want to check pricing and try our veterinary discount program, risk-free? Click here

Most people believe that tarantulas are deadly, but in fact, there are no known instances of anyone dying from a tarantula bite. In addition, most of the pet store specimens that you'll encounter are exceedingly docile, and will generally not bite unless they are severely provoked. Because tarantulas are so large and intimidating looking, they have been labeled unfairly.

Unlike a dog or a cat, these animals do not require much care. They can go for weeks without food or water, although some regular care is still needed and recommended. Tarantulas do not generate much waste either, and so cleaning their cages is easy as well. Some species do have rather specific humidity requirements, but the most common pet store varieties are not so demanding. They also require very little space, and most of them can be kept in plastic shoe box-sized containers. Make sure that their lids fit tightly though, as these creatures can be quite good at escaping.

Owners should be aware that even within docile species, there is the possibility that some individuals may be more aggressive than others. Just like humans, all creatures have unique personalities and tolerances, so be careful and pay attention to your pet so you can learn its personality. It's good to remember there is always the possibility of an allergic reaction if you are bitten. In theory, this could result in a potentially fatal anaphylactic shock. For these reasons, new owners should learn how to read a tarantula’s body language, and should stay away from species that have a reputation for biting without provocation.

It's also good to remember that you never have to actually hold the tarantulas—just as you never have to actually hold your aquarium fish. Once again, it's best to do some reading on handling techniques, so that you can move the animals around without having to touch them. This can be very helpful for those who are squeamish, or those who simply wish to be extra cautious. When in doubt, always err on the side of safety. If you’re not intimidated by the prospect of keeping one of these wondrous creatures, then they can be quite addictive, and they never fail to be entertaining.