A rare breed as colorful and unique as its name! 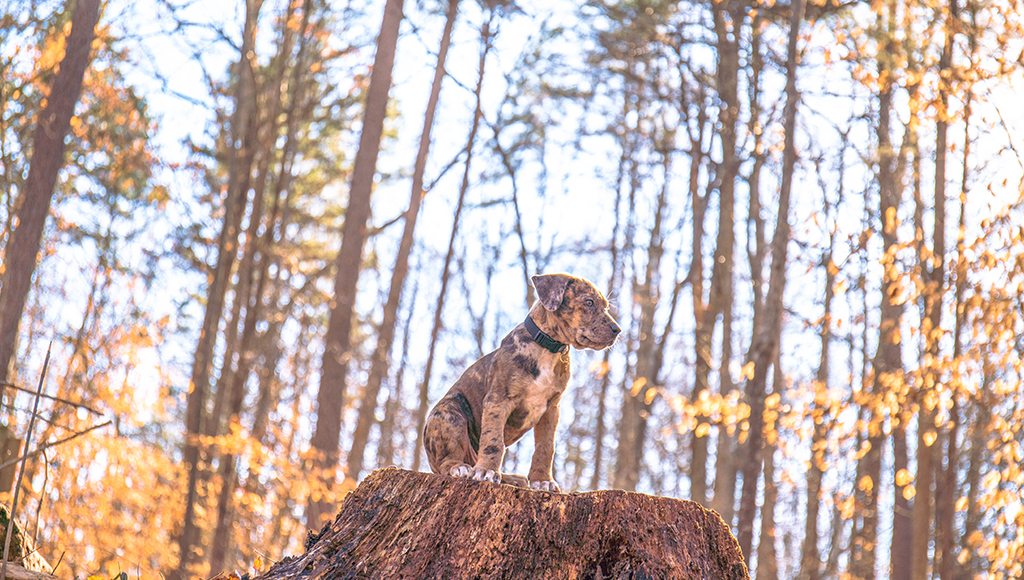 The name "Catahoula" actually comes from the Indian word meaning, 'clear water.' There is some speculation that the Catahoula Leopard dog is a descendant of the greyhounds and mastiffs that were brought into Louisiana by Hernando de Soto in the sixteenth century. These original dogs were also known as war dogs and are thought to have interbred with the local red wolves.

In the next century, the French began to arrive in Louisiana as well, bringing the Beauceron dog breed, which then mixed with the interbred dogs that were now in the area, producing the breed as it is seen today.

Governor Edwin Edwards made the Catahoula Leopard dog the official state dog of Louisiana in 1979.

Often called the most versatile of all working dog breeds, the Catahoula Leopard dog is certainly an active canine. From being able to herd cattle and hunt many species of game - deer, bear, boar, raccoon, and squirrel - to being an excellent candidate for Search and Rescue as well as drug detection, needless to say, the Catahoula Leopard dog is a protective breed that is intelligent and adaptable to nearly every situation.

Also known as a Louisiana Catahoula Leopard dog, this dog breed likes to be as active as possible and requires a fair amount of mental stimulation to keep occupied. Often growing to 20 to 26 inches long and 45 to 95 pounds, this moderate breed stays in shape by being put to work in the fields or in various law enforcement situations.

The Louisiana Catahoula can be a number of different colors, so it can be difficult to identify them just from their coats. Ranging in color from red, blue, yellow, and even tan or white colors, this breed's short coat is easy to maintain and suited perfectly for their active lifestyle.

As with most smart dog breeds, the Louisiana Catahoula Leopard needs to have a fair amount of stimulation in order to stay energized and happy. These dogs are highly intelligent and quick to assess situations, making them perfect helpers in law enforcement. But at the same time, this energy they have can also match perfectly with young children. The Catahoula is gentle and loving with younger children, so unlike other sporting dogs, this breed can be a good addition to a home setting.

Because of their high intelligence, the Catahoula Leopard is often trying to learn new things and will be curious about their environment. This creates a sort of independent manner about them, and they will go off to wander and explore alone if they are compelled to do so. This dog breed is often encouraged in homes that have a lot of room for the dog to roam, but in city or suburbs, they might feel too caged in.

Spending a lot of time with this dog is imperative for its health and happiness. This is a dog that craves interaction with others and wants to be a part of the family that it belongs to. If you do not have time to interact with this type of dog breed, it may not be a good fit for your home. What may not work for every family is the Catahoula Leopard's tendency to be very overprotective of their family and of their territory. This can cause problems in some situations. Though the initial protectiveness may not be seen in the first few years of a Catahoula's life, it's at the age of two that this breed begins to feel it has a responsibility to protect its owners.  What's interesting too is that the Catahoula can become mild-mannered and timid around strangers, not from intimidation, but from hesitation. These dogs are intolerant of strangers and that's what makes them seem fearful in the presence of someone they don't know.

The Catahoula can also become fierce when they are around other dogs, especially when the dogs are the same sex as they are. This may be something to consider when deciding to bring a Catahoula into your home when other dogs are already part of the family.

With all of these personality features in mind, some more mild-mannered dog owners may not be a good fit for the Catahoula Leopard. The owner needs to be someone that is ready to demonstrate leadership for the dog, as this breed wants to be lead and trained by an authority.  When trying to control your Catahoula Leopard, you will want to make sure they attend obedience classes as well as have a place where they can be locked up when you're not around to monitor their actions.

Want to learn how to save on veterinary care for your Catahoula Leopard Dog? Click here

While generally a Health dog overall, the Catahoula Leopard can encounter some problems during their active life. This particular dog breed is prone to hip dysplasia, which can cause pain and problems with mobility as the condition progresses.

Those Catahoulas with a white coat or with a white face are also prone to issues with glass eyes. These particular colored dogs can often have an 80% chance of developing Deafness in one or both ears.

Occasionally, this dog breed will have troubles with their eyes, leading to tunnel vision, abnormal pupil dilation, and sometimes problems with the eye opening. This is often seen in particular breeds, like the McMillin line.

Some of the Catahoula Leopard Dog breed can also develop cancer in their older years.

With a short and smooth coat of fur, the Catahoula Leopard dog is easy to groom. They require bathing only a few times a year (more if they've gotten into something messy), but their coats do not require constant brushing. Using a curry comb, bristle brush, or horsehair mitt, you simply brush the dog outside once or twice a week depending on how much the dog sheds. This will give the dog a shiny coat and also keep hair from piling up around the house.

In addition to brushing your Catahoula's coat, you should also trim their nails once a week to prevent overgrowth. This is very easy to do and you will need a pair of animal nail clippers that can be found in most pet stores. Only trim the top portion of the nail.

Cleaning your dog's ears may also be necessary especially if they suffer from allergies, bacterial infection, or they have a wound or other type of injury. Clean ears with baby oil and a cotton ball. Do not go too far into the ear as you could damage the ear canal. Instead, gently wipe around the outer ear. If you notice your dog is scratching its ears often or shaking its head too often, you should take the dog to the vet as they may have an infection. With proper grooming, you will always have a happy, well adjusted dog that looks beautiful at all times.

Want to learn how to save on veterinary care for your Catahoula Leopard Dog? Click here

The high activity level of the Catahoula Leopard lends itself well to the farm or country setting, but may not work as well in the suburbs or a city dwelling. The workaholic personality of this dog breed needs to be constantly satisfied, or the dog may become unnecessarily aggressive. If at all possible, the Catahoula Leopard needs to be working during the day as a herder or in some other capacity. They enjoy being outdoors and playing, rather than sitting around. This particular dog breed should be allowed to run for a full hour daily, at least to help maintain their health as well as placate their energetic demeanor. The Catahoula Leopard might be an excellent companion on a jog or a hike, as they can keep up the pace quite easily. Though they are noisy and playful when they are active, Catahoula Leopards that don't get enough activity can begin to chew, bark, or dig excessively in order to deal with excess energy.

It's best to take this particular dog breed to an obedience school when they are young to begin to train them in the proper ways of acting around other dogs as well as their family. Quick to learn, however, they are often the star pupils in their training classes due to their intelligence. In many cases, the Catahoula Leopard is a quick learner and often does not require any additional training outside of their owner.

However, if the owner is not strong willed and able to stand up to this strong dog, the training may become problematic. It takes a forceful dog owner to handle the energy and the intelligence of this dog, so if the owner is not confident in their abilities, it will help if they train themselves to train before bringing this dog home. The Catahoula Leopard needs to have someone as assertive as they are in order to keep them under control. When an owner falters in their assertiveness, it can cause the dog to exhibit out of control behaviors that can become harmful to others.