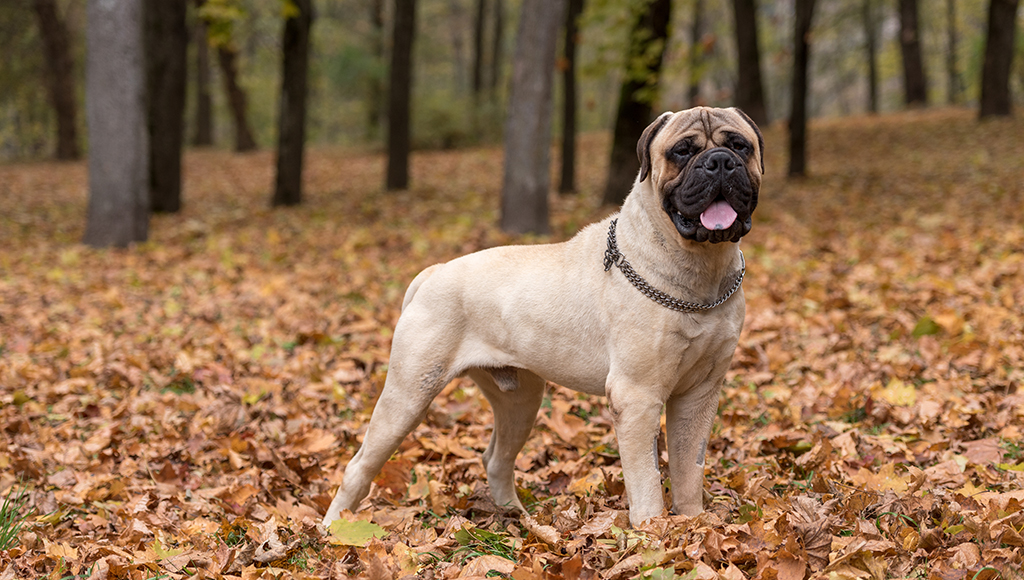 The Bullmastiff is a strong and powerfully built animal that possesses great intelligence and a willingness to please, making them ideal family companions and protectors. Although large, the breed remains both agile and active and is successful in conformation, obedience, agility, tracking, carting and therapy work.

The Bullmastiff’s history begins in England around 1860, when the breed was developed to help keep large estates and game preserves free of poachers. Games keepers needed a dog that could track quietly, cover short distances quickly and pin down and hold poachers without mauling them to death. The breeding was 60% Mastiff and 40% Bulldog; breeders were hoping to create a dog faster and more aggressive than the Mastiff, yet bigger than and not as ferocious as the Bulldog. The dogs were fierce and threatening, but were trained not to bite the intruders. When the need for games keeper’s dogs decreased, the dark brindle colored dogs so good for night camouflage gave way to the lighter fawn-colored variety. Bullmastiffs have been prized as a hunting guard, as an aid in army and police work and used as a watchdog by the Diamond Society of South Africa.

The Bullmastiff is very powerfully built, but not cumbersome, with a broad wrinkled head and a fairly short, square, dark muzzle (about 1/3 the length of its whole head). The nose is black with large nostrils. The dark hazel, medium-sized eyes have an alert, intelligent expression. The v-shaped wide-set ears are dark colored. The short back is straight and level between the withers and the loin. The tapering tail is set high and reaches to the hocks. The short, slightly rough coat comes in brindle, fawn, or red, often with black or darker markings on the head and most usually have a very small white spot on their chest. The Bullmastiff's fur is dense and water resistant lying smooth on the body providing good weather protection.

The Bullmastiff is a dog of incredible strength, keen alertness, and surprising endurance. Fearless and confident yet docile, the Bullmastiff combines the reliability, intelligence, and willingness to please required in a dependable family companion and protector; they are a natural guardian of the home and will not back down from a fight.

Bullmastiffs are normally mild mannered and docile, but once aroused can be aggressive with other male dogs and strangers. Despite this, the breed is very tolerant of young children and small pets. Although characterized by gentleness, they may be rather standoffish to strangers, but are very loving toward their owner. Bullmastiffs are very cheerful, calm and make a devoted, gentle companion to any family.

Want to learn how to save on veterinary care for your bullmastiff? Click here

Bullmastiffs do not require a lot of exercise but should be exercised regularly to keep them trim and fit. This breed is somewhat lazy and inactive indoors and can make do with a small city backyard. Bullmastiffs do not like hot humid conditions and love shade and air conditioning. If the Bullmastiff is walked every morning and evening, it can become a ‘couch potato’ during the day and will easily adapt to apartment life. This breed can also adapt to being left alone during the day.

Bullmastiffs require minimal grooming beyond an occasional brushing and regular toweling to wipe off the drool. Another good characteristic of this breed is that it is a low-to-moderate shedder.