As with all wild creatures, snakes should be respected, and caution used at all times! 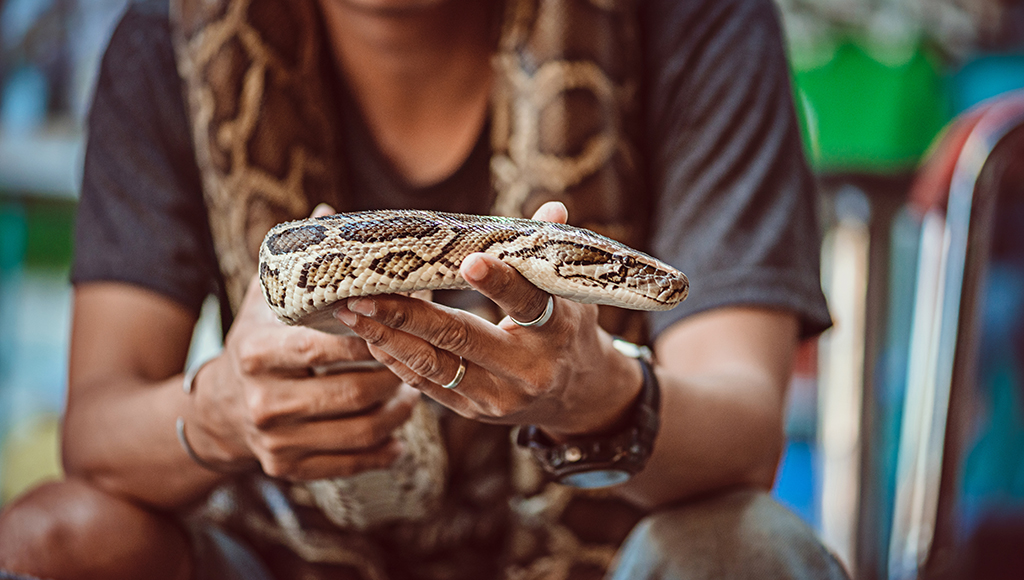 There are scores of urban myths floating around about snake bites and the proper methods with which to treat them. Unfortunately, these myths have been accepted as truth too often and have resulted in senseless deaths and injuries related to snake bites. Bites by snakes are dangerous for two reasons: poison and infection. It is important to remember that even if you are bitten by a nonvenomous snake, there are still dangers.

Following strict safety guidelines, exhibiting caution and using good common sense at all times, can help you avoid unwanted dangers, especially in unfamiliar areas and terrains. If you are going to be hiking, walking or camping in an area that may contain venomous snakes, you should be able to identify them instantly on sight. Make sure you read all warning notices, and have thoroughly researched your location.

All venomous snakes do not have common characteristics, though some urban myths would have you believe that they all have triangular heads and bright colors. Rather than relying on these fallible identifiers, research the venomous snakes in a locality before you go there, so you’ll know exactly what to avoid. Make sure you read all warning notices and follow any guidelines posted for your safety.

An ounce of prevention could save your life:

Dry Bites - Dry bites are referred to as “misses,” no venom injected due to the lack of venom, a glancing blow, or penetration could not occur because of the clothing worn by the individual. Dry bites account for about 20-30% of all snakebites.

Pit Viper Bites - Pit vipers have two fangs and the bite often has two small holes. There are many symptoms associated with the bite of a pit viper. Fang marks are always present, followed by swelling, pain, and black and blue marks on the skin. Sweating, chills and muscle twitching are commonly seen. Some numbness on the tongue may occur, and reports of a metallic taste are not uncommon. Venoms of the pit viper contain peptides and proteins. The venom leads to damage of vascular cells and red blood cells. Proteolytic enzymes damage muscle and are responsible for tissue death. There is also a histamine release by the body after the bite.

WHAT IF I’VE BEEN BITTEN BY A SNAKE?

THINGS YOU SHOULD NOT DO IF BITTEN BY A SNAKE:

If you are bitten by a snake, these are the things that you should not do to treat the wound:

Rather than subscribing to these urban myths, attempt to attain medical help as quickly as possible. If you are too far away to reach a hospital within an hour, you can use a cold compress on the wound to help slow the spread of the venom to the rest of your body. Don’t take any prescription or OTC medication, which can actually make things worse; you should also avoid imbibing alcohol. Instead, get to a hospital as quickly as possible and, if feasible, take a picture of the snake that bit you so that the hospital personnel can identify it. If taking a picture isn’t possible, try to remember exactly what the snake looked like so that the proper antivenin can be administered.

Preventing Heatstroke in Cats and Dogs

Dehydration in Dogs and Cats