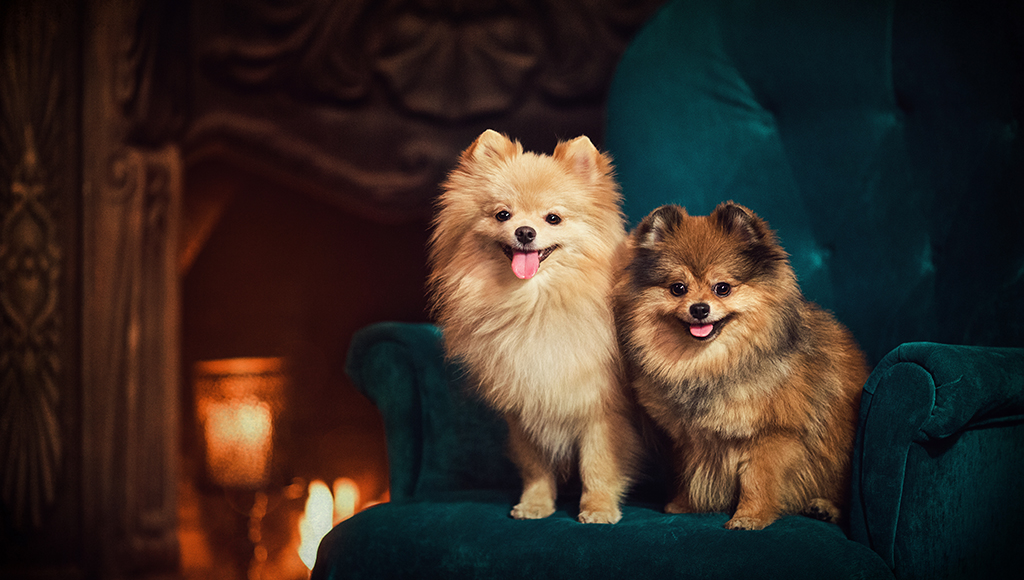 The Pomeranian (often referred to as a “Pom Pom”) is a breed of dog, of the Spitz type, named for the Pomerania region in Central Europe (which today is part of modern eastern Germany and northern Poland) and classed as a toy dog breed because of its small size.

Pomeranians are very small dogs. The Pomeranian has soft and fluffy fur; their thick, fluffy tails fanning up over their backs. When born, the tails of Pomeranians are straight or slightly curved. It usually takes a Pomeranian’s tail 1-3 months to curve over its back. Their teeth come to a scissor bite and they have almond shaped eyes. A Pomeranian’s fur can be many different colors including white, tan, black, brown, orange, sable, wolf, or white with colored markings.

Healthy Pomeranians often live 12-to-19 years. A common problem in Pomeranians is Legg-Calvé-Perthes syndrome and sometimes hip dysplasia (although rare in this small breed). However, Patent ductus arteriosus (a congenital heart defect) and colla (a collapsing trachea) have become serious problems in Pomeranians.

Dry eye and tear duct disorders can appear in young females and often lead to blindness. Skin diseases are also quite common, especially allergies (that often lead to acute moist dermatitis or “hot spots” and follicular dysplasia (also known as alopecia X). Other problems that occur regularly include hypothyroidism, epilepsy, and hypoglycemia. Occasionally, hydrocephalus can occur in Pomeranian puppies, as well as luxating patella (slipping kneecap). Pomeranians may also suffer from Progressive Retinal Atrophy (PRA), a degenerative disease of the eye and cataracts (a clouding of the lens of the eye); both of which can result in impaired vision.

Pomeranians, like many toy breeds, are prone to bad teeth and harmless episodes of reverse sneezing (a spasm caused by an irritation of the soft palate). It is also important that Pomeranians be trained not to mingle around peoples feet. Because of their loyal tendencies, they will follow from room to room, easily getting stepped on. Their delicate bodies will injure easily this way.

Want to learn how to save on veterinary care for your pomeranian? Click here

Pomeranians are typically very friendly, playful and active. The breed is very protective of their owners and love to be around them. They are very intelligent and are easily trained. They rank 23rd in Stanley Coren’s “The Intelligence of Dogs”, being of excellent working/obedience intelligence. Pomeranians socialize well with other dogs, animals, and people. Pomeranians are extroverted and can develop the habit of barking excessively only if the behavior is rewarded (i.e. allowed to beg for food). Because of their long double-coat, they tend to seek out cooler environments and it is not uncommon to find them lying down on a cold floor or hard surface.

Many people believe the Pomeranian to be a lap dog. They are extremely loyal and will sit or lie content at an owner's feet, but normally prefer not to be over-handled. Pomeranians should not be allowed to run free and should always be kept on a leash or enclosed in some kind of yard or inside. They tend to usually be good with kids from the age of 3+ if raised with them from the start. Because of their size, they do well in condominiums and apartments, but are able to adapt to most any situation or environment.

In the 1890's the Pomeranian "sports" breed began to be “showed in the ring” and were about 10 pounds. Since then, the size of the Pomeranian has decreased to 3-4 pounds. The Pomeranian has been among the most popular of dog breeds, consistently in the top 15 of registered A.K.C. dog breeds over the last 10 years. In recent years, the Pomeranian has become an "accessory" or a "prop" to many people-notably women and especially celebrities. This breed also shows up regularly on television shows and commercials. This dog's diminutive size, ease of care in regards to its stature and good overall demeanor makes for a very likeable dog.

A good Pomeranian, because of the breed’s positive traits, makes it a popular pet and considered a prize by their owners.