Pocket Pets: What is a Sugar Glider?

They make good companions and tend to bond to their owner in a short span of time. 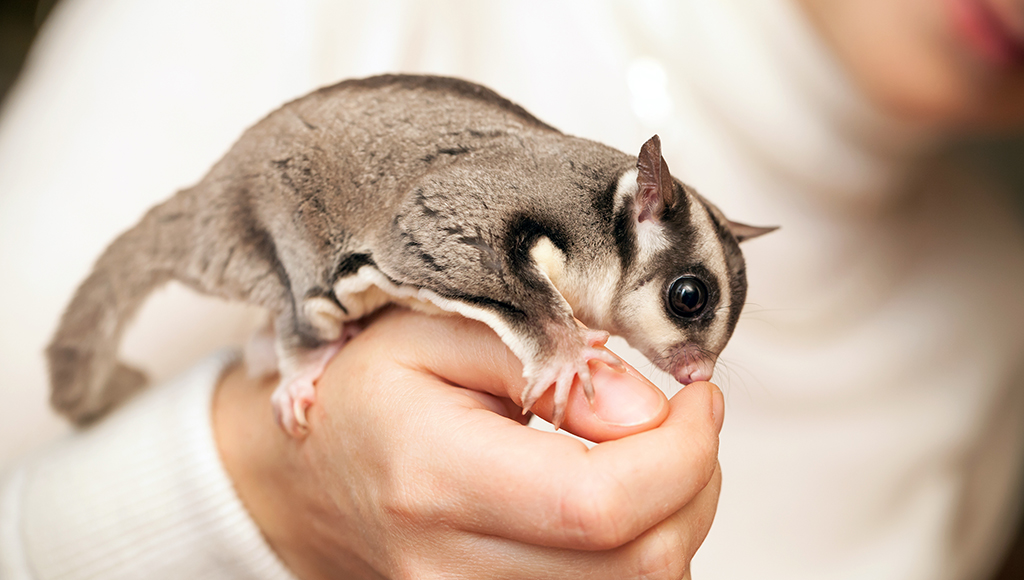 The Sugar Glider is a tiny marsupial originally native to eastern and northern mainland Australia, New Guinea, and the Bismarck Archipelago, and introduced to Tasmania. Introduced into the United States approximately 20 years ago as domesticated house pets, Sugar Gliders are an extremely popular companion pet. A recent 2007 study conducted by the American Veterinary Medicine Association (AVMA), estimated that American families have 1.1 million domestic Sugar Gliders in their homes; placing them in popularity between hamsters and guinea pigs.

Unlike many native Australian animals, particularly smaller ones, the Sugar Glider is not endangered. Sugar Gliders are protected by law in Australia, where it is illegal to keep them without a permit or to capture and sell them without a license. Outside Australia, the Sugar Glider is a popular domestic pet because of its lively and inquisitive nature, and with plenty of attention (a minimum of 1-2 hours of daily human interaction), it bonds well to human companions. In the United States, Sugar Gliders are legal in 47 of the 48 contiguous states, with California being the only exception. In Pennsylvania, they are legal as solely house pets, but breeders require a special permit and there are some restrictions on selling them.

Where legal, the Sugar Glider is not difficult to breed in captivity under the right conditions. Sugar Gliders are not exotic animals as defined by the USDA and their breeding is regulated by the USDA.

The Sugar Glider is between 6.3 to 7.5 inches in length, and weigh between 3 to 5.3 ounces. They have large protruding eyes and a tail almost as long as its body and almost as thick as a human thumb. The tail tapers only moderately and the last quarter of it is black, often with a dark tip. The sugar glider has very thick soft gray mink-like fur with a black stripe that runs the full length of the body in line with the spine. This black stripe extends up and over the top of the head. The glider also has dramatic black markings on the face, legs and back. The fur is generally pearl gray, with black and cream patches on the underbelly and black or gray ears. The muzzle is short and rounded. Northern forms tend to be brown colored rather than gray and their size generally is a little smaller. The ears are large, thin and hairless and are constantly in motion, moving independently of one another to pick up the smallest sounds.

The most distinctive features of its anatomy, however, are the twin skin membranes called patagia which extend from the fifth finger of the forelimb back to the first toe of the hind foot. These are inconspicuous when the Sugar Glider is at rest – it merely looks a little flabby – but immediately obvious when it takes flight. The membranes are used to glide between trees when hunting for food. When fully extended, the membranes form an aerodynamic surface the size of a large handkerchief. These membranes are also used to gather food while hunting. The membrane has a thin sheet of fur surrounding it, but it is usually pink in color.

Although its aerial adaptation looks rather clumsy in comparison to the highly specialized limbs of birds and bats, the Sugar Glider can glide for nearly 55 yards and steer effectively by curving one membrane or the other as needed. Its hind legs are used to thrust powerfully away from a tree as it takes flight.

Gliders have odd qualities such as opposable fingers and toes. Their front feet have five fingers with sharp scimitar shaped claws. The hind feet have a large opposable big toe. The next two toes are fused together to make one toe with two nails. This toe is used as a grooming comb. The glider will scratch himself with this comb and then bring the foot around to his mouth, clean it, and repeat the process over and over. This fused toe is typical of many marsupials.

To identify each other they rely more heavily on scent. Each glider has its own specific scent signature so that other gliders can recognize them. Sugar gliders "shake hands" by rubbing themselves on each others scent glands. Despite the fact that they communicate by scent, they are not particularly smelly. You may occasionally smell a fruity musky scent, but it is not strong and is nothing like what you would associate with ferrets or skunks.

While all animals will bite when frightened or startled, even wild caught sugar gliders are unable to bite hard, and seldom draw blood (unlike hamsters or gerbils). Both male and female sugar gliders make excellent pets, with a life span of ten to twelve years, sometimes longer. In the wild, however, 4 to 6 years is the usual life expectancy.

In the wilds of its native habitat, the Sugar Glider is a tree dwelling creature, often living in groups of 15 to 30. They are a nocturnal creature so they are most active at night when they hunt for insects and small vertebrates and feeds on the sweet sap of certain trees. The Sugar Glider is so named for its preference for sweet foods and its ability to glide through the air like a flying squirrel.

In captivity, sugar gliders are kept in large bird cages or aviaries. They sleep in nesting boxes similar to those used for birds. A mated pair may produce up to three litters a year with one or two babies per litter being the norm. The babies are easily tamed with regular handling. Two sugar gliders of the same sex will cohabit successfully if you don't want offspring, however, males will fight each other for dominance if females are present in the group.

A healthy diet is VERY important. Serious health conditions will arise if your glider is not fed properly. Here are some important tips:

Bonding With Your Glider

The sugar glider makes a fascinating and unique pet which becomes extremely friendly when provided daily interaction with humans. In order to become the friendliest possible pets, glider babies should be handled daily as soon as they have emerged from the pouch and their eyes are open. Their most endearing quality is the ease with which they bond to their human friends, especially when obtained at a young age (best if purchased shortly after weaning). If properly cared for, they will soon crave your attention. Being nocturnal, they are content to "snuggle" during the day in their cage or in your hand or pocket. During the evening, they become more active and will glide into your hand. Hand-tamed, well adjusted gliders are easy to handle and will not run away, even during their active periods.

Although reasonably easy to care for, sugar gliders require more time than most small caged mammals, and have some specialized needs. Before deciding to become a sugar glider owner, be sure you have the commitment and time your new pet needs. Sugar gliders are extremely social animals. In the wild, they live in large family groups, called colonies. Because of their social nature, pet gliders should always be kept in pairs or small groups. No matter how much time you plan to spend with your pet, you cannot replace the companionship of another glider.

It is unnatural for a glider to ever be alone, and unfair to force solitude upon your pet. When housed alone, gliders are likely to become depressed, withdrawn, even defensive, and may refuse to eat and could eventually die from loneliness! If you aren't interested in breeding, same sex groups are able to get along. If keeping males together, they should be litter-mates or introduced at a young age.

Tame gliders can be let out to play in the evenings but they must be supervised; you will be surprised at how fast they can "jump" away from you! Tame gliders like to climb on curtains, play in the house plants, and just plain jump from place to place. Give them an opportunity and they will find a way to play in your house. Gliders can become very bonded to their owners and can often be trusted to ride on a shoulder or in a jacket pocket.

The charming sugar glider is fast becoming a popular household pet in North America. Indeed, they have many of the characteristics of the perfect pet in that they are clean, personable, attractive and relatively quiet. Their housing and dietary requirements are easy to cater to. They are hardy and don't have a lot of health problems.

But while sugar gliders really do make great pets, think before you buy a glider and consider the following questions:

If you are planning on purchasing a small pet for your kids or family, and are looking for a pet that is cute, friendly and fun, then you should consider a Sugar Glider. However, Sugar Gliders require a good deal of special care and are better for older children. Here are some important things to remember if you are considering purchasing one of these delightful creatures:

The average life span of a Sugar Glider is around 12 to 15 years. They are known for their sociable behavior. They are active pets that love to jump, hover around and glide. Sugar Gliders need special care and attention. They can’t be left unattended, and the owner has to give enough care and constant love and attention to this pet in order to keep it healthy and hearty.

Last but not the least, Sugar Gliders are wonderful pets to keep and care for. They make good companions and tend to bond to their owner in a short span of time. One can say that they are true fun to watch and play with.