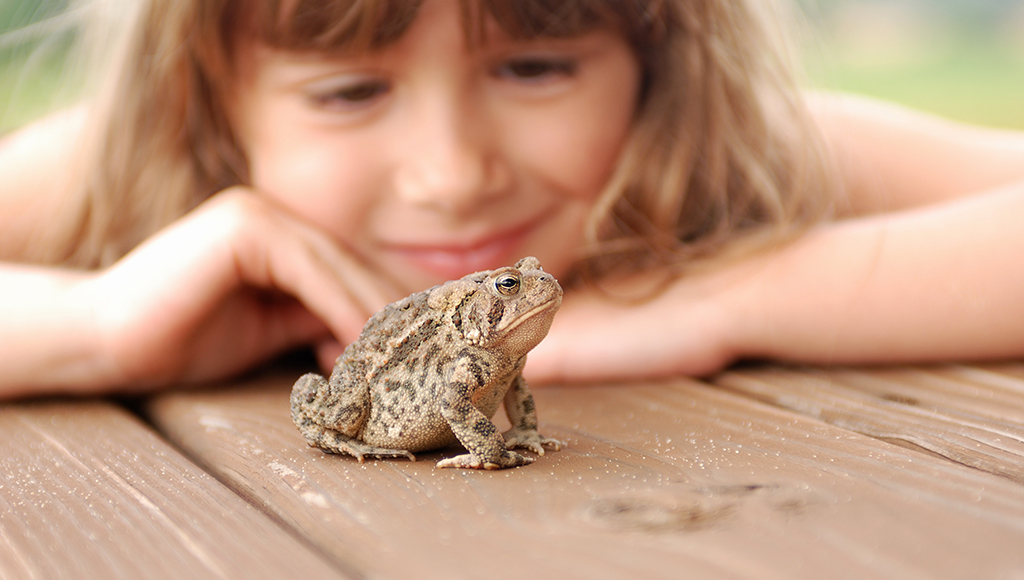 Before you run out to the nearest pet store or pond to find your new pet frog, there are several things you should consider. A frog can be a lot of work, and have very specific feeding needs. Frogs aren’t like goldfish either so you need to think about what you're going to do when you plan to go out-of-town for a week. Not too many people will be anxious to handle bugs at feeding time.

Frogs need to be fed on a regular basis. Keep in mind where your food source is going to be. Generally speaking, this isn't going to be as easy as picking up a package at your local grocery store. In addition, if you get a frog that eats live bugs, expect to have a few stray bugs running around the house now and then. The larger frogs can be even more work. Many of the larger species feed on mice and this can be a less than fun experience if you aren't prepared for it. Frog tanks need to be cleaned often to prevent illness and to keep bacteria and odors to a minimum. Also, keep in mind that different types of frogs have special needs for housing.

When deciding which type of frog to get, be careful not to make the common mistake of choosing your frog because he is "cool-looking". You may find that he eats, sleeps, and generally sits like a lump of clay. The reality is, a lot of frogs don't really do much, and they aren't exactly something you can snuggle up with or take out to play with either. Different species can be cute or some may be grotesque. You can't teach frogs tricks, take them for walks, or make them speak on command. Inactive frogs will quickly become a boring pet. The novelty will wear off and you'll be left with a blob that eats a lot. When looking for a pet frog, particularly for the beginner, it’s a good idea to choose an active species. Aquatic frogs, certain tree frogs, and the less "fat" frogs are the best choices.

There are many species of frogs, and many of them have very individualized pet care needs. Some frogs need to hibernate during the winter, while others do not. Proper pet care needs will change from what you need as far as tank set-up to what type of food you will need. Another important thing to remember when choosing which species, is how large they will be when they reach their full grown size. Many frogs look cute in the pet store, and then you bring them home and in a few months they've grown in monstrous proportions and aren’t nearly as nice as you thought they were going to be. Frogs live for a very long time, so make sure you choose wisely.

A good beginner species is the African Dwarf Frog. This species is small, active, cute, and about as difficult to maintain as a tank of goldfish. You also don't have to deal with live bugs and they can be kept in the same conditions as goldfish for extended periods of time (as long as there is a cover). Dwarf frogs are very easy to take care of once they've become used to their new home. As with all fish, expect the first couple of weeks to see decreased activity while your frog acquaints himself with his new surroundings. During this adaptation period frogs may be a bit fragile. Because frogs can be somewhat fragile when very small, it’s a good idea to get them at a decent size; avoiding really skinny ones or those smaller than the size of your fingernail. In addition, if the frog doesn't give the pet shop owner a really hard time when the net goes into the tank, it may indicate some initial signs of being in less than perfect condition. Don't confuse African Dwarf Frogs with African Clawed Frogs, which look very similar when small. The clawed frogs get quite large and are actually illegal in Oregon and California.

For a beginning frog owner who wants to get the full terrestrial experience, Oriental Firebellied Toads are an excellent choice. These frogs are fairly simple to care for, and they are incredibly active creatures. They also don't get too large. This species also has no hibernation requirements they do well in the temperatures people generally have in their homes. Unless you live in an icebox or in extremely hot climates, this species of frog won't need special climate control for its terrarium. You'll need to find someone who can handle crickets when you go away on vacation for a week or more to take care of them. Frozen crickets are much easier than frozen mice!

A good Tree Frog for beginners is the White’s Tree Frog. This frog has a funny personality and seems to be quite a popular pick. It should be warned however, that some children bore of the whites tree frog despite its funny personality, simply because they tend to just sit around a lot. In addition, the White’s Tree frog is one of the few frogs that is fit to occasionally be handled. In addition to dealing with crickets, the White’s Tree Frogs need a little more care than the Firebellied because they live best with humidity and are happiest when the tank is sprayed with water once or twice every day. However, as far as Tree-Frogs go, they are by far one of the easiest to deal with and the hardiest species available to be kept as pets!

Poisonous frogs are absolutely NOT appropriate for beginners. Even though these frogs lose their toxicity in captivity, their care is very complicated and these fragile creatures have very specific requirements for healthy captivity. Expensive frogs in general should not be a frog considered by the beginner because a frog that costs over $50 is a high investment to make when you are still learning about frog care.

Frogs captured in the wild should be a frog that you KNOW, otherwise you take the risk of not knowing the proper temperatures, diet, etc. Frogs that get fat, like the Horned (Pacman) Frogs, Budgettes Toads, and Bullfrogs can get to be pretty boring as pets for the beginner; however, these are very hearty and not as prone to the usual frailties of other types of frogs.

What Can I Feed My Pet Frog?

Read More What Can I Feed My Pet Frog?
Health & Wellness

What Do Bearded Dragons Eat?