This disorder appears in cats and can be frustrating to the pet and their owner. 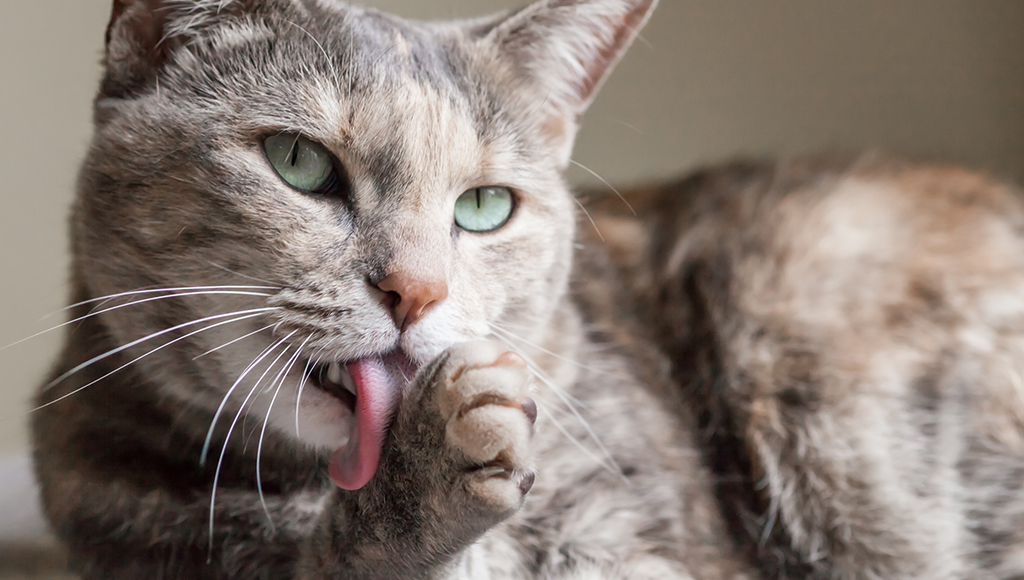 Obsessive behavior in cats often mirrors the same disorder in humans. Affected felines may engage in repetitive actions (excessive grooming, pulling out hair) that seem pointless and even harmful. In some cases, these may be triggered by separation anxiety, stress or even boredom. Treatment by an animal behaviorist may help, as well as medication, though often the simplest solution is to pay more attention to the cat.

Consult your veterinarian if you are concerned that your cat may be exhibiting repetitive behavior patterns that appear to have no purpose, and that can be described as obsessive-compulsive disorders. In cats, such behaviors include compulsive pacing, repetitive meowing (vocalizing), fabric sucking and chewing, or licking and pulling their hair. The exact cause or causes of this compulsive behavior in otherwise normal cats have not been identified.

What is an obsessive-compulsive disorder?

This is when a cat exhibits abnormal and recurrent actions that are out of context with the situations in which they occur. The behavior becomes compulsive as the cat loses control over initiating or terminating it. The behavior is deemed excessive in duration, frequency, and intensity when the cat becomes difficult to distract from the behavior, and when it interferes with normal daily functioning and routines.

What are some examples of obsessive-compulsive disorder?

Repetitive motor, grooming, ingestive, or hallucinogenic behaviors that occur out of context, or are of excessive duration or frequency include excessive sucking and chewing, hunting and pouncing at invisible prey, running and chasing, paw shaking, excessive vocalization, self-directed aggression such as tail chasing or foot chewing, and overgrooming. Freezing and staring is also considered an obsessive-compulsive disorder if it is an inappropriate and extended behavior.

How does a behavior become compulsive?

Since certain behaviors are more common in certain breeds there may be a genetic predisposition to obsessive-compulsive behaviors. Wool sucking is observed more commonly in oriental breeds.

Without even realizing it, some owners inadvertently encourage these behaviors such as giving attention to the cat while it exhibits the behavior as a kitten (pouncing on invisible prey), or by trying to disrupt the behavior with food, a treat, or extra attention. Compulsive behavior may also be a response to stress or boredom. Many behaviors arise spontaneously as a response to conflict or anxiety, such as a change in the cat's environment. Over time, the behavior becomes fixed and independent of what caused it in the first place. These behaviors may allow some animals to cope with difficult situations.

Want to learn how to save on ocd treatment? Click here

What is feline psychogenic overgrooming or alopecia?

A normal amount of grooming takes up 30-40% of a cat’s time. Overgrooming is excessive licking and pulling out fur, which leads to bald patches and hair discoloration. Often the baldness or alopecia is symmetrical. A medical problem must be ruled out before a behavior problem is treated. Many skin disorders cause itchiness that can result in alopecia. Treatment with anti-inflammatories, an elimination diet trial, and sometimes skin tests for allergies may be performed by your veterinarian before a behavior diagnosis is reached.

How are obsessive-compulsive disorders treated?

Some behaviors are not treated if they are not causing any physical harm to the cat and do not cause the owner significant concern. For some cats, the compulsive behavior may be the most practical and acceptable outlet for reducing stress or resolving conflict in the home environment.

Drug therapy is often used as it can help normalize brain neurotransmitter levels. Drugs are used in conjunction with behavior modification, which involves reducing stress or finding methods of decreasing the sources of arousal and conflict. Situations that cause the behavior are examined so that they can be avoided if possible. Other environmental or social changes that can contribute to anxiety include a new baby, a territorial neighborhood cat, or a family member leaving the household.

To rectify, the behavior is not rewarded by attention from the owner, or other pleasant distractions. The cat can be distracted from the behavior by remote or indirect devices such as an abrupt loud noise (ultrasonic alarm or air horn), or a water pistol. Once the cat is distracted sufficiently to stop the behavior, alternative behaviors are then encouraged such as playing with the owner or with a toy.

The cat also requires stimulation in the form of exercise, attention, interactive play, chew toys, catnip toys, play centers, as well as a safe, private place for resting. Cats can also be trained.

Punishment is often detrimental, and causes increased anxiety and fear of the owner; therefore it intensifies the problem rather than corrects it. Your veterinarian can help you to identify the source of the problem in your cat, and design a behavior modification program in conjunction with appropriate drug therapy, or refer you to an animal behavior specialist.

Cook Up A Thanksgiving Cornucopia Your Pets Will Gobble Up!

Should You Walk Your Indoor Cat Outside on a Leash?