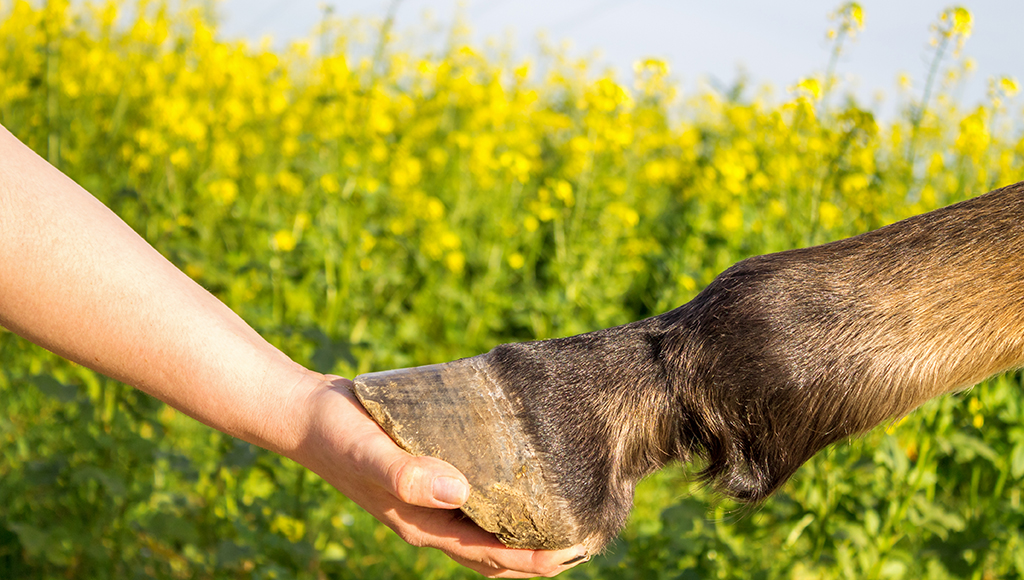 Laminitis is a fat-related disease that affects the digital laminae of the hoof of a horse or other hooved animal. There are two types of laminae in the horse's foot. The sensitive laminae attached to the pedal bone and the insensitive laminae attached to the inner hoof wall. The function of the laminae is to bind to each other and to keep the pedal bone suspended within the hoof capsule and to allow for normal hoof wall growth over the stationary bone. Laminitis is inflammation of the sensitive laminae of the hooves. However, many horses experience inflammation of these structures without developing the acute disease and chronic changes we refer to as laminitis.

A comparison is walking through the sole of a pair of shoes or wearing through your socks.  The outer hoof capsule can no longer suspend the rest of the foot within it. Therefore, laminitis the disease would be better described as “acute laminar degeneration” which is due to a complicated, interrelated sequence of events including enzymatic breaking of the bonds between the sensitive and insensitive laminae. The weight of the horse and the forces of locomotion drive the pedal bone down into the weakly attached hoof capsule.  Shearing forces damage the arteries and veins and the corium of the sole is crushed as the bony column of the limb descends deeper into the foot and the hoof capsule slides up over the pedal bone. Laminitis causes unrelenting pain and a characteristic, often severe lameness, usually worse in the front feet.

One in three horses, and over 80% of ponies, are currently believed to be in danger of laminitis – the equine equivalent of a human heart attack. Laminitis has been known of for as long as recorded history and is the second most common cause of death of horses after colic. Severely affected animals do not die directly from the disease but will ultimately be euthanized for humane reasons due to chronic lameness. This may occur weeks or many years after the initial onset of laminitis.

Over the past 10 years there have been huge steps forward in the study and prevention of laminitis. Researchers have found that there is more than one nutritional cause of laminitis, although the clinical signs might be similar.

Want to learn how to save on laminitis treatment? Click here

With severe laminitis it is clear that something is wrong even if you do not realize at first what the problem is because your horse will be obviously uncomfortable. Signs of discomfort may include:

Treatment should commence immediately. Sensitivity to hoof testers around the wall and sole varies. The horse may appear lame, but not necessarily sick. It may not show any of the classical symptoms or observe the rules of laminitis. Usually, the horse becomes progressively worse over a period of hours or days, with obvious distress if forced to walk.

During the developmental phase of laminitis a period of vasodilation (dilatation of blood vessels) characterized by increased hoof temperature is strongly implicated. This can be treated by cooling the feet which inhibits enzyme activity and decreases vasodilation. If you think that your horse or pony is developing laminitis and the feet are warm with strong digital pulses, bath the feet in ice and water immediately. Keep ice floating in the water at all times and continue this as often as practical, approximately 15 - 30 minutes every few hours for several days.

The second or acute phase of laminitis is considered to be the first 48 hours after the symptoms of hoof pain are noticed. This phase lasts from onset of lameness to downward displacement of the distal phalanx within the hoof. Not all horses go on to develop chronic changes in the hoof, and effective treatment and management of the primary cause and the laminitis itself at this stage can decrease the ongoing damage and long term effects.

The third or chronic phase of laminitis is when physical changes have occurred in the feet. The distal phalanx is no longer able to align with the hoof wall normally and is described as rotated. The horse’s own body weight forces a degree of movement of the wall upwards over the pedal bone, this is described as "sinking". It is expected that if a horse is relying on the bonded laminae to suspend the sensitive hoof within the hoof capsule, and most of these bonds were weakened or broken, that the wall would simply slide up over the bone like a stone would sink in a glass of  water. It is an effect of gravity. This is why when this occurs to any degree but especially when it occurs severely that the horse is described as a sinker.

Want to learn how to save on laminitis treatment? Click here

While there isn't a cure for laminitis prevention is the best step forward. Watching what you feed your horse or pony might not be enough to minimize the risk of this life threatening disease; lifestyle changes are needed too.

Tips to minimize the risk of laminitis:

1. Feed according to workload - a horse in light work or at maintenance doesn't need lots of calories. They will put on fat if their calorie intake exceeds their calorie use.

2. Fat score your horse every fortnight and keep him at less than 3.7 during spring and summer.

3. Don't forget that horses evolved to put on fat through the spring and summer but they lost it through the winter.

4. Horses that don't do much work during winter are ok to drop their fat score to 2.5. If your horse loses muscle he will get a "weak outline", the tip here is not to improve his outline by making him fat, wait till spring when you can ride him again and build up his outline through building muscle.

5. Try and ensure that your horse gets a minimum of 1/2 hour of active walking per day.

6. If your horse has put on fat in the summer, then make the most of the winter to lose this fat.

7. Don’t cut back on your horse's bulk. Horses need bulk to:

8. Cut back calories by soaking hay for 12 hours which reduces the sugar/calorie content.

9. Make sure that the diet is balanced in terms of vitamins, minerals and protein throughout your horse's life.

The solution to laminitis is not simple, but by combining these three factors: reduce obesity, ensure nutrition is optimal by feeding your horses with high quality horse feeds specially formulated to help prevent laminitis, and increase exercise – you can reduce the risks and occurrence of laminitis.

Tips For Showing Your Horse This Spring and Summer

What to Do if Your Horse Goes Blind

Horsing Around 101: The Best Horses for the Beginner Rider

Read More Horsing Around 101: The Best Horses for the Beginner Rider