An enthusiastic hunter with a fastidious nature and exceptional personal hygiene 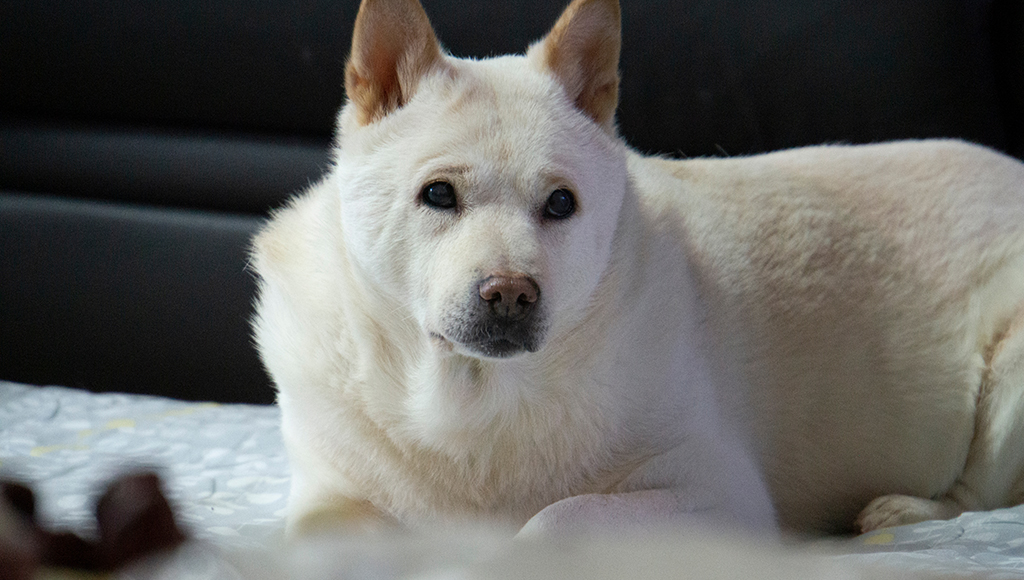 It is believed that the Jindo resulted from crosses between indigenous Korean dogs and dogs brought by the Mongols during their 13th century invasion of Korea. The Korean King surrendered but some of his armies withdrew to Jindo Island, off the southern coast of Korea, where they continued to fight. The soldiers' dogs ended up isolated on Jindo Island, where they developed a very pure strain. Jindos served both as hunting and guard dogs in Korea. In 1938, the Korean government designated the Jindo as a National Treasure. Jindos marched in the opening ceremonies of the 1988 Olympic Games in Seoul, Korea.

The Jindo is a medium-sized, sturdily-built, Spitz-type dog, with an octagonal-shaped head, prick ears, and a harsh, straight coat of medium length. The body is either square or slightly longer than tall. The tail is thick and may be loosely curled over the back or carried over the back in a sickle position. Gender differences in this breed are very apparent. Typically, males are larger with heavier heads while females have more fox-like heads. The appearance of the Jindo gives the impression of intelligence, strength, and agility. The Jindo has a double coat that sheds heavily twice a year. During the shedding season, extra care must be given to the coat. Warm baths can help the process along. Daily brushing is necessary to remove the undercoat. Otherwise, be prepared for rolling tumbleweeds of undercoat.

The Jindo is an enthusiastic hunter, able to follow the cold trails of rabbit, raccoon, and badgers. In packs, Jindo can even hunt wild boars and deer. Jindos are renowned for their loyalty to family members and their attachment to their home. Jindos have often been known to travel long distances to return to their original owner. The Jindo has a fastidious nature and puppies are housebroken with little training. Jindos also keep their coats extremely clean. Jindos are, by nature, watchful of other dogs and may, on their own territory, react aggressively to intruding dogs. Jindos are highly intelligent but because of their independent nature, respond best to positive reinforcement training, and preferably from their owner. While the Jindo is devoted to its owner, they are aloof and suspicious toward strangers.

Want to learn how to save on veterinary care for Jindos? Click here
Want to check pricing and try our veterinary discount program, risk-free? Click here

The Jindo should be allowed to live indoors with the family as opposed to being relegated to the yard where he might get into mischief out of boredom or loneliness. Jindos have been known to scale walls or fences that were 8 feet high. As independent as he is, his first desire is to be with his owner. As long as they are sufficiently walked, Jindos can be pleasant apartment dwellers due to their natural fastidiousness. Jindos will groom themselves like cats to keep themselves clean. They are very easy to house train.

Jindos need room to move. These dogs love to roam and investigate their territory (which to them, is fairly expansive). Unless well-trained on recall, it is highly recommended that Jindos be walked on lead at all times because of their prey drive. A minimum of two, 30-minute brisk walks are necessary and should be enough to keep a Jindo happy. Although Jindos are not famous for their fetching abilities, they can be trained to fetch which is also an excellent form of exercise. Playing tug-of-war with a Jindo is not recommended unless the owner is assured victory.

The Jindo is a relatively healthy dog with a life expectancy between 12-15 years. However, with this breed hypothyroidism can be a problem.