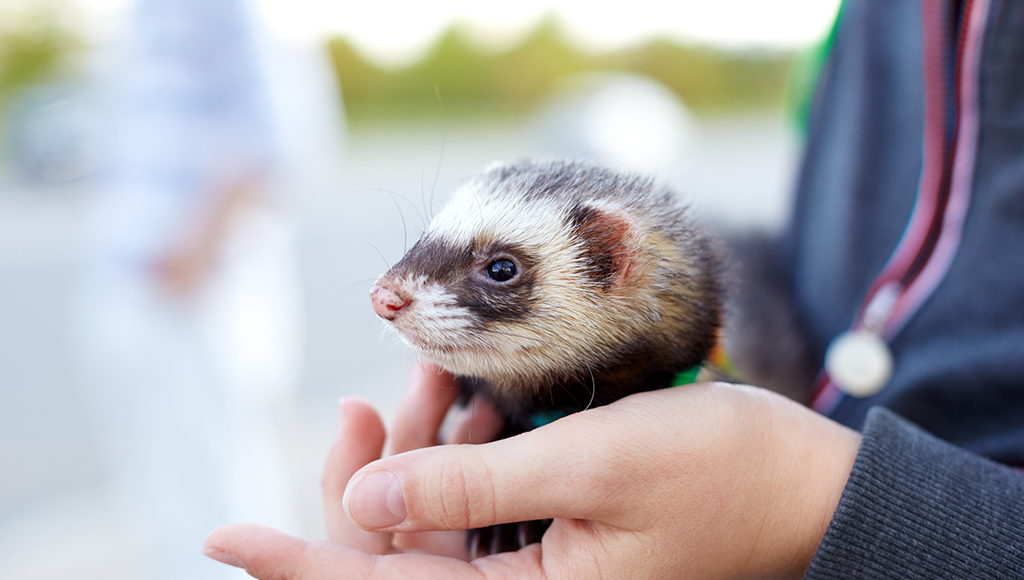 Insulinomas are growths that occur on the pancreas of the ferret. They can be cancerous or non-cancerous in nature. Insulinoma involves the beta cells in the pancreas of the ferret that develop into tumors, and unfortunately is fairly common in ferrets aged 2-4 and up. It is the tumors that causes the excess production of insulin (a hormone which allows cells in the body to use glucose in the blood), producing a dangerously low blood glucose level (due to the high absorption), also known as hypoglycemia. These tumors can typically range in size from 2mm - 1cm, and may occur singularly or as a group of small nodules, and are a recurring problem.

This is a very serious condition that can lead to coma and death if not treated.  Ferrets are generally at risk when they reach three or more years of age.  If your ferret seems to be sleeping more than usual, lays on the floor and is non-responsive for a brief period of time, has a loss of appetite or has any of the symptoms listed above, you should have blood work performed by your veterinarian as soon as possible. Once your ferret reaches the age of 2, it is a good idea to get a "Fasting" Blood Glucose test to have as a baseline, repeating this every 6 months - 1 year. This testing is precautionary and can help you diagnose the disease before any symptoms even begin to appear.

Many veterinarian's feel that as a strict carnivore, the pancreas of ferrets are very sensitive to sugar, believing that giving sugary treats and foods may even cause insulinomas. It is important to NEVER provide any sugary treats or snacks such as raisins, fruit, or honey.

Sugars rapidly convert into glucose providing major energy sources for the bodies cells. High glucose levels in the bloodstream create high demand on the pancreas to produce insulin allowing the cells to use glucose. The chronic high levels of blood sugar and stimulation of the pancreas to produce and release insulin (caused by high carb diets) is strongly believed to contribute to the development of this disease.

The best and healthiest treats you can offer are those that are animal protein based. Unfortunately, there is no absolute cure for this disease; however, with carefully supervised treatments consisting of surgery (if needed), diet control and medicines, a ferret's life span can be increased by 3 or more years.

Want to learn how to save on insulinoma treatment? Click here

The most common early sign of insulinoma is a blank expression as if "staring into space", for a prolonged length of time. Other symptoms may include mild-to-severe variations of the following:

If you ferret goes into a seizure, it can be a very frightening experience. It is important for you to stay calm, focused, and see to your pet's medical needs immediately. Your ferret may be stretched on its side, have excessive drooling to foaming at the mouth, twitching, shaking, and be unresponsive. During this time, you will need to apply a small amount of honey or karo syrup (which you should keep on hand) on their gums and inner lips with a Q-tip (to avoid accidental biting). You might have to repeat this every few minutes for up to 20-30 minutes, at which time your ferret should start becoming alert again. Giving your ferret the syrup is only a temporary fix.  Your ferret's body will begin to produce more insulin to break down the sugar you just gave to him/her.  He or she will be at great risk for having a second seizure and could go into a coma and die.  You should get your ferret to your veterinarian immediately! Your veterinarian can give your ferret treatment to stabilize the blood sugar. You should NOT provide honey or karo syrup to your ferret at any other time!

As the disease progresses, the signs and symptoms will also increase and become more and more severe.

The most accurate test to diagnose and confirm Insulinoma is to measure the "FASTING" blood glucose levels by a lab, using a simple blood test. The normal range for a ferret is 80-120 mg/dl, with anything under 70 (by lab test) strongly indicating the possible presence of one or more tumors. If several tumors are found, surgery should be scheduled as quickly as possible providing your ferret has no other health concerns.

Your veterinarian might request several tests to obtain a mean average, as the values can fluctuate. Prior to each test you will need to fast your ferret between 4 - 6 hours. Once Insulinoma has been confirmed, the "FASTING" blood glucose test should be repeated every 4-12 weeks. You can also test at home after consulting with your veterinarian.

It is strongly recommended that you have routine blood glucose tests for your ferret. This precautionary routine will provide you with the needed information to stabilize (with drugs if necessary), a ferret already diagnosed, as well as those in the early stages of the disease, as well as for monitoring and preventive measures if your ferret has not yet been diagnosed with insulinoma. You can try performing the blood glucose tests at home after discussing it with your veterinarian.

At one time, it had been suggested that supplementing a ferret's food with Brewers Yeast might help regulate their insulin and glucose levels; however, it has now been proven ineffective and should be avoided. Brewer's Yeast contains chromium, which will actually lower (not raise as originally thought) the glucose level, which is the last thing you want to do for a ferret that is suffering from insulinoma.

Want to learn how to save on insulinoma treatment? Click here

Treatments for insulinomas are generally surgery and medication.  Unfortunately, insulinomas tend to grow back in as fast as a few months.

Surgery as early as possible is the treatment of choice. A partial Pancreatectomy often provides increased survival and often no additional medicine is need for some time (can be years). A partial Pancreatectomy consists of the removal of the tumors and part of the pancreas (no more than 50-70% can safely be removed). The earlier the procedure is performed, the better the results, so you should be expedient in making this decision.

If you decide to wait on the surgery and go with the drug treatment until it's no longer beneficial, chances are it may not help your ferret that much, as during this time the tumors are continually growing. The drugs have no effect on the cause of the problem which are the growing tumors.

Drug therapy is one treatment available; however, a large majority of veterinarians, feel it is important to consider that drug therapy is only a temporary remedy and rarely effective in controlling the hypoglycemia for a long period of time. It is important at this time, that you ensure your ferret is receiving a high quality/protein diet. If you are unsure exactly what this means, consult with your veterinarian on a specific diet.

If surgery is not an option, or until it is viable, the drugs of choice are Prednisone, which raises the blood glucose levels by mobilizing carbohydrates and/or Proglycem, which is an anti-hypertensive drug which decreases the secretion of insulin.

Prednisone is usually the first drug used (and is relatively inexpensive), with a typical dosage range of 0.5 - 2.5 mg/kg twice a day. Prednisone can produce what is known as "Pred Belly" Belly (weight is gained) and over time of usage can cause liver damage. It is important when using this drug to give with food as ulcers can develop.

Although the cause for insulinomas is not known, there is some speculation as to why they occur.  There seems to be a high incidence of insulinomas occurring at the same time as adrenal disease.  This could mean that there may be a relationship between the two conditions.  Diseases of the pancreas may also be linked to the amount of sugar and simple carbohydrates a ferret consumes.

There are currently no cures for insulinomas.  Although they tend to be isolated to the pancreas, there have been cases where cancerous insulinomas  have metastasized to other organs.  Initial surgery, medication, and feeding your affected ferret frequent small high protein meals can extend their life by a year or more.