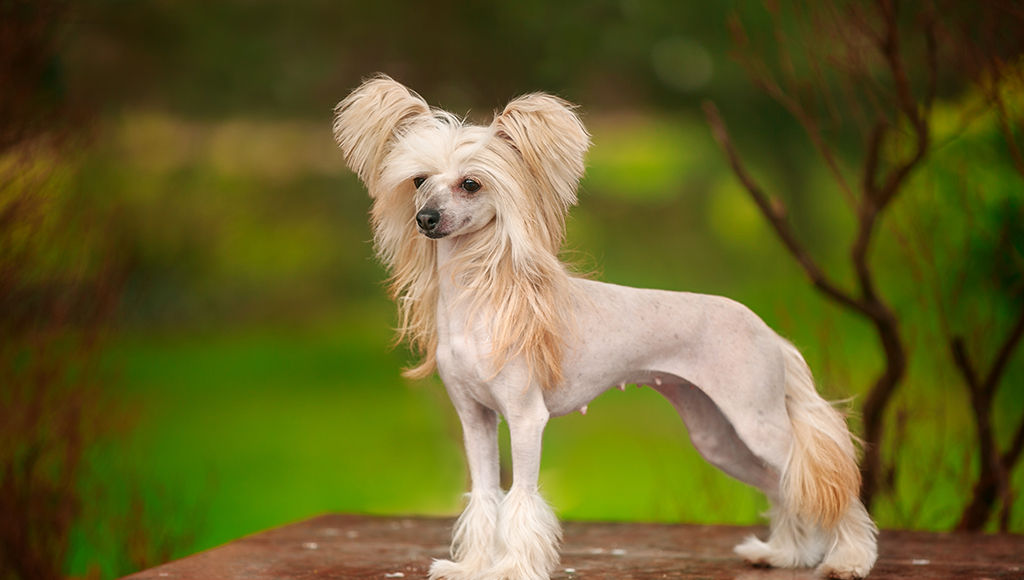 Chinese Cresteds, while not the most well-known dogs, are sociable, sweet, and make good companion pets. Their exact origins are not certain, but it is popular belief that Chinese Cresteds bred from African Hairless dogs. Centuries ago, when the plague was prevalent, Chinese sailors kept these dogs on ships to hunt flea infested vermin, which often carried the disease. Chinese Cresteds started to gain a following in the United States during the nineteenth century. The famous movie and television actress Gypsy Rose Lee got a Crested during the 1950s and subsequently helped to publicize this breed.

The American Kennel Club (AKC), which registered the Chinese Crested in 1991, classifies the breed in the Toy Group. With their weight usually ranging from 9 to 12 pounds, and their average height between 11 to 13 inches at the shoulder, these slender dogs are quite small. There are two types of Chinese Cresteds: a hairless Crested and a fully coated Crested, also known as a “Powderpuff”.

At first glance, the "Hairless" and "Powderpuff" varieties of Chinese Crested dogs appear to be two different breeds, but hairlessness is an incomplete dominant trait within a single breed. In fact, despite its name, the Hairless Chinese Crested does have some hair - usually on its head, tail and feet. If kept in good condition, the Crested's skin is smooth and soft, and also comes in several different colors or has spotted skin.

The Hairless has soft, humanlike skin, as well as tufts of fur on its paws ("socks") and tail ("plume") and long, flowing hair on its head ("crest"). In addition to being an incomplete dominant gene, the "hairless" gene has a prenatal lethal effect. Zygotes affected with double hairless genes never develop into puppies, and reabsorb in the womb. The Hairless variety can vary in amount of body hair. Fur on the muzzle, known as a beard, is not uncommon. A true Hairless often does not have as much furnishings (hair on the head, tail, and paws). The skin of the Hairless varies in colors, ranging from a pale flesh to black.

Surprisingly, the Powderpuffs, often born in the same litter as the hairless Cresteds, come completely covered with fur. They have a double coat that tends to be soft, silky and straight, although some may have curly hair. Both the Powderpuff and Hairless Cresteds shed very little, and sometimes not at all, so they may be a good breed for people with allergies.

Interestingly, the Crested commonly has few pre-molar teeth, but most of their teeth are pointed. Though not considered a fault, Hairless Cresteds often lack a full set of premolar teeth and have a "primitive mouth". This means that most of their teeth are pointy like their canines. Most dogs of the Powderpuff variety have few, if any, dental defects.

Want to learn how to save on chinese cresteds care? Click here

The Hairless Chinese Crested’s skin needs particular attention. Without proper care, a Crested's skin can become dry and breakout with acne. This dog can also get sunburned very easily when outside. Therefore, it is important to remember to clean, moisturize and use sun-block on the Hairless Crested’s skin, and to consult a veterinarian regarding the type of products that are best to use. Hypoallergenic or oil-free moisturizing cream can keep the skin from becoming too dry when applied every other day or after bathing.

The Powderpuffs have a very soft and fine double coat that requires frequent brushing with a soft bristle brush, in order to prevent tangles and matting. Although a Powederpuff's coat does not continuously grow like that of some other breeds, it can grow to be quite long at full length. Unless the dog is a "True Hairless" (one with virtually no hair growth on non-extremities), trimming and/or shaving helps to remove excess hair growth.

The Chinese Crested is further distinguishable by its hare foot, (having more elongated toes) as opposed to the cat foot common to most other dogs. Their nail cuts should not be too short because Cresteds’ have quicks that run deeper into their nails than other dogs. Cutting Cresteds’ nails too short can cause pain and bleeding; therefore, it may be best to have your veterinarian clip them.

It's important to brush both the Powderpuff’s and Hairless Crested’s teeth on a regular basis. Hairless varieties of the Cresteds can be prone to poor dentition. Poor dentition may include missing or crowded teeth and teeth prone to decay with out proper care.

Want to learn how to save on chinese cresteds care? Click here

In general, Chinese Cresteds tend to be very healthy dogs. They have an average lifespan of 14 years, but some Cresteds live longer. It’s easy to prevent fleas and ticks, due to the fact that the hairless variety has little fur. All dogs require regular veterinarian check-ups and shots in addition to heartworm medication. Most dogs require an annual check-up, but a veterinarian familiar with Chinese Cresteds may determine that additional checkups will be necessary. It’s also very important for the Crested to get annual dental cleanings by a veterinarian.

Eyes are a concern within the breed since they are prone to having at least two forms of progressive retinal atrophy (PRA), which can eventually lead to blindness. For one of these forms of PRA, there is a genetic test, prcd-PRA. Since this test can only reveal the existence of affected or carrier status of this one form of PRA, breeders and owners of the breed should still have regular eye exams by veterinary ophthalmologists.

Cresteds can also develop canine multiple system degeneration (CMSD). This is a progressive movement disorder that begins with cerebellar ataxia (lack of coordination of muscle movements) between 10 and 14 weeks of age. After 6 months of age, affected dogs develop difficulty initiating movements and fall frequently.

As with all other toy breeds, the Cresteds can be prone to patellar luxation. Shallow knee joints cause this inheritable condition, which result in kneecaps that pop out of place. The onset of this condition often begins at a young age, and can cause temporary to permanent lameness based on the severity. When buying a Crested puppy from a breeder, make sure they can show proof that their stock is certified and free of patellar luxation. Many countries' kennel clubs maintain a centralized registry for health results.

Some allergy and autoimmune diseases are prevalent in this breed. The severity of these ailments, which can lead to the premature death of the dog, means this is something breeders need to take seriously in order to avoid a progressing problem for the breed.