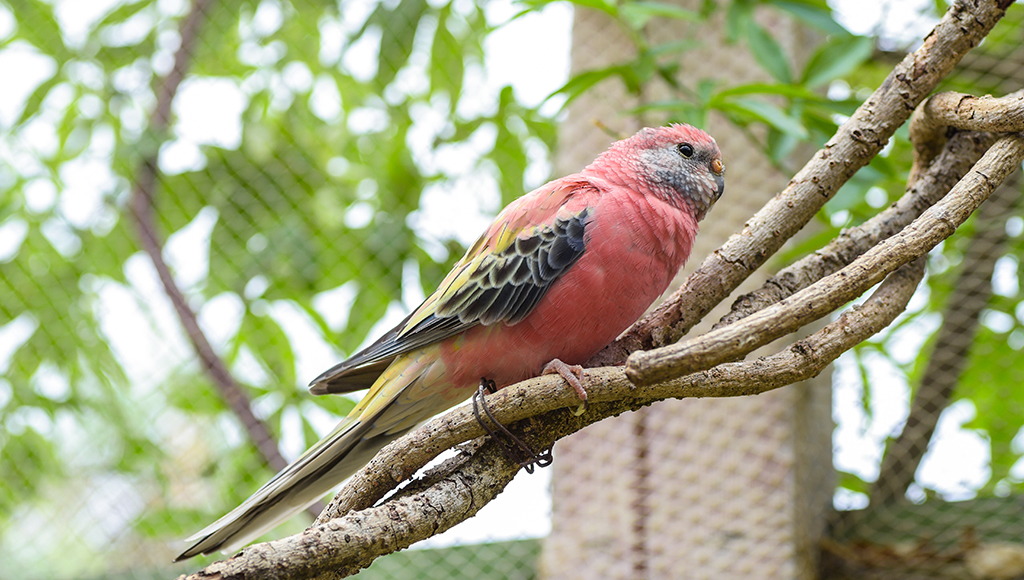 The Bourke's Parakeet, also know as the Bourke's Parrot, is a quiet little bird, whose pleasant chirping is a delight; often sounding like a gentle melodic tinkling. These parakeets are usually most active at dawn and dusk and this is usually when you hear their sweet voices the most. The Bourke's Parakeet is not as active as many birds, and to some this may be a slight drawback. However, if you are looking for a fairly inactive parrot with a sweet and gentle disposition this may be the perfect bird for you. The average lifespan of this parakeet is 8 to15 years.

Bourke's Parakeets are relatively hardy birds and are an excellent choice for beginning breeders. The Bourke's Parakeet has a gentle disposition and does well in aviaries with other bird species such as cockatiels and finches. If they are kept in an aviary, these are the times they usually fly. During other parts of the day they remain relatively sedentary. When compared to some other parrot breeds, the Bourke's is relatively non-destructive and can be housed in a planted aviary. If you decide to keep one of these birds as an indoor pet, a hand fed individual is recommended. As pets, Bourke's Parakeets are reported to be affectionate and relatively quiet, making them quite suitable to apartment living. Their calls are typically only heard when they fly in the wild. Occasionally these birds may give a sharp high-pitched alarm call if they are startled, but most of the time you will simply hear them twitter happily when they eat.

The Bourke's Parakeet is quite distinct in that its primary plumage is not green, but instead may range from grey to a beautiful sunset pink. It is the only member of its genus (Neophema) that lacks green primary plumage. They are relatively small, measuring approximately 7.5 inches (19 centimeters) in length, though females tend to be smaller than the males. The average adult will weigh between 42 and 49 grams. In addition to the size differences, males may also be distinguished from females, because the males have blue feathers above the nares. This may be present in females, but it is generally much duller. Bourke's Parakeets are mainly grey, pink, and blue, and the females are duller than the males and have a white wing stripe. Immature birds will have duller coloration than the adults and will also lack the blue frontal band. Adult plumage is usually reached by 8 or 9 months of age. In addition to the wild type, also called "normal," there are several color variations. Some of the most popular are the Rosy (also called Rosa), Yellow (also called the Cream) and the Pink Bourke. Bourke's have large eyes, and this may be an adaptation to the fact that they are most active when the sun is not as high.

The Bourke's Parakeet is native to Australia and is seen throughout the central and southern interior regions. They generally prefer open habitats of arid or semi-arid scrublands, and are seen in pairs or small group usually no larger than 10 to 30 individuals. Their name is derived from that of Sir Richard Bourke, who was the governor of New South Wales from 1831 to 1837.

Bourke's Parakeets should have a fairly large cage, lengthwise, to allow space for flying. A cage 24x24x30 inches high should be sufficient, though a larger cage would always be appreciated. If you should decide to get a larger cage, length is more important than height. The cage must have a bar spacing of no more than half an inch.

The diet for the Bourke should include a mixture of canary seeds and millets along with safflower and some sunflower seeds. Kale, boiled egg, spray millet, broccoli, grated carrot, corn and chopped apple can also be offered. We have offered other fruits and veggies but the above seem to be the ones they normally chose to eat.

Sprouted or germinated seeds are usually more easily accepted by "seed addicts" than fresh fruits and vegetables. Sprouted seeds are healthier as the sprouting changes and enhances the nutritional quality and value of seeds and grains. Sprouted seeds are lower in fat, as the process of sprouting utilizes the fat in the seed to start the growing process - thus reducing the fat stored in the seeds. Sprouted seeds will help balance your bird’s diet by adding a nutritious supply of high in vegetable proteins, vitamins, minerals, enzymes, and chlorophyll.

Soaked and germinated "oil" seeds, like niger and rape seeds, are rich in protein and carbohydrates; while "starch" seeds, such as canary and millets, are rich in carbohydrates, but lower in protein. It is an invaluable food at all times; however, it is especially important for breeding or molting birds. Sprouted seeds also serve as a great rearing and weaning food as the softened shell is easier to break by chicks and gets them used to the texture of seeds.

Should I Buy an Automatic Pet Feeder?

Ask Dr. Jenn: We want to start raising backyard chickens. What do we need to know?

Read More Ask Dr. Jenn: We want to start raising backyard chickens. What do we need to know?