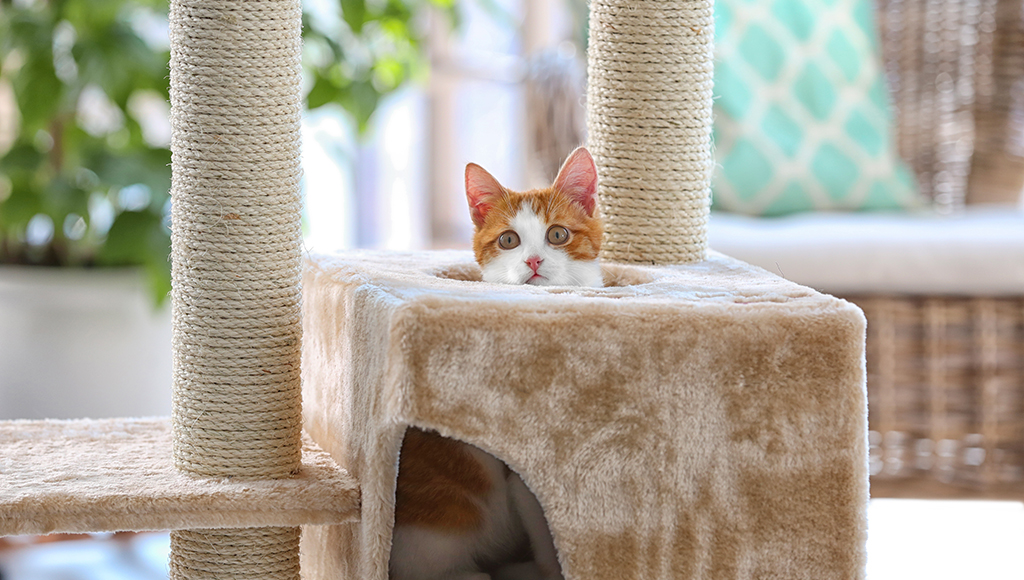 Why do cats cover their feces?

Many people believe they bury their waste products because they are fastidious. That isn't necessarily so. In the wild, only secondary cats bury their waste to protect their trail from predators. The dominant feline will actually display his or her feces prominently. This sends a strong message of dominance. In the world of house cats, you are the dominant animal and the house cat chooses not to offend you. They will carefully bury their feces to eliminate interfering with what they perceive as the natural order.

Anything up high gives cats a great view from which to keep an eye on their property. It's safe and secure, and they can keep a lookout for prey.

Do cats have a memory?

Cats have a memory that can be up to 200 times more retentive than dogs. The individual feline uses his memory only for what he regards as useful functions; therefore, a cat's memory is quite selective.

Why do cats chatter when seeing a bird?

The odd behavior that resembles teeth-chattering is usually produced when a cat sees something he wants but can't get to it. Though his mouth is slightly open (the lips pulled back and the jaw opening and closing rapidly), it's not a form of communication. The noise made is a combination of lip-smacking and teeth-chattering as he gets more excited. He may emit small bleating noises like a baby goat. So far, none of this is believed to have any function.

Why do cats hiss and spit when attacked or threatened?

Believe it or not, they are imitating snakes. The sound of the cat's hiss is almost the same sound as a snake's hiss - and the snake is one of the most feared creatures in the animal world. Hissing is pretty common in all land animals. When a cat hisses, he opens his mouth halfway, drawing back the upper lip and wrinkling the face. As he does this, he expels his breath so hard that, if you were close enough, you could feel the jet of air. The moisture he releases with this gusty breath is what's called spitting. It almost always succeeds in repulsing an enemy.

Why do cats want out when in... and in when out?

Cats have a very powerful need to check out their territory from time to time. The reason that their checking is so rhythmic is because of the built-in time clock of their scent marks. When outside, cats rubs a territory marker or sprays urine on it to keep their rivals away. The staying power of the scent becomes weaker with time and eventually disappears. This means that they will need another visit outside to do it all over again.

Why are cats so territorial?

All cats are territorial by nature, even those who live indoors. They're very protective of their space. Inside, a cat claims from an entire room to a specific corner of a bed. Outdoors it is especially important for a cat to stake his territorial claim, limited only by how big an area he feels he can reasonably defend. New cats in the neighborhood have to fight to be accepted and to win territory. Each cat's territory includes a few types of spaces: private where he will sleep and feel safe, commonly held grounds which he will share with a few other cats, and meeting grounds where a group of cats will meet. An outer part of the territory is where he will hunt and roam. Usually by battling it out with other cats, they establish their territories. Often, they form a time-share system, using the same areas, but at different times. When they fail to agree on the rules, the caterwauling begins.

Why do cats feel compelled to bring dead prey into the house?

Returning with the spoils of the hunt is their way of proudly bringing back a gift to their guardian. Normally, cats see us as a parent figure, but when they present gifts of prey, they see us as their kittens. Accept the gift graciously and properly dispose of it. Big cats in the wild present prey to others in their den as a social gesture. Perhaps they prefer to share it in safety where chances of theft are slim.

What do your cat's eyes reveal about his moods?

The pupils of a hungry cat's eyes will dilate up to five times their normal size when he spies his food bowl, even if it's empty. They'll also appear as big black pools when frightened or threatened. Half closed eyelids say that he's totally relaxed; when fully closed, he's very satisfied or asleep. He will shut his eyes for protection against a dominant rival. When forced into submission, he shuts out the image of his tormentor. The victor perceives this as defeat and usually walks away.

Why are cats so hard to train?

Actually, cats aren't that tough to train; they just refuse to perform for a pat on the head. They're indifferent to the process and learn tricks only because they want to. Because they're not renowned for their obedience, we think they're defiant. However, if there's something in it for them, they are quick to learn. Cats learn by association. You can't bribe them with sweets because their taste buds don't have any sweet receptors (as meat eaters they don't need them). They can't tell the difference between a sugar solution and plain water. As with all animals, coaxing them includes much love, patience, consistency, authority, repetition, and reward ... but never punishment. Dogs are trainable because they are born to follow leaders; cats, on the other hand, take care of themselves.

In the animal kingdom, the cat's IQ is surpassed only by monkeys and chimps. Cats think and adapt to changing circumstances and learn by observation, imitation, and trial and error. Interestingly, cats seem to learn more quickly from their own mothers than from examples set by unrelated cats, but imitate humans. They have been shown to exhibit greater problem solving abilities than dogs. Tests conducted by the University of Michigan and the Department of Animal Behavior at the American Museum of Natural History have concluded that while canine memory lasts no more than 5 minutes, a cat's recall can last as long as 16 hours, exceeding even that of monkeys and orangutans.

A cat's intelligence is confined to cautiousness with a guarded view of the world. They're smart enough to know danger and remarkably well-equipped to avoid it. Their curiosity is related to their high intelligence. They will work endlessly in order to get the results they want.