Ever Wondered Why? Curious Facts About Cats - Conclusion

We hope these articles have helped you enjoy your feline friends even more! 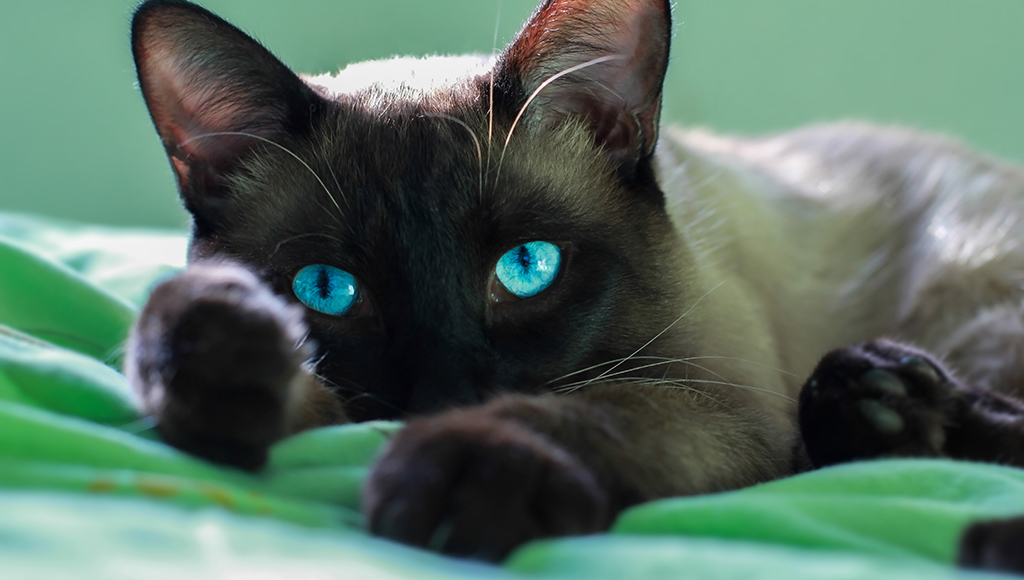 Why do a cat's eyes seem to glow in the dark?

There is a simple explanation for that characteristic green or gold shine. A membrane, called tapetum lucidum, coats the eye and reflects light. When a cat is in the dark, his pupils open wide and light is reflected off them, but they aren't actually glowing. This ability, along with their extraordinary sensitivity to ultraviolet rays, enables them to see very well in the dark.

Can cats really see in the dark?

They can't see in total darkness and their daytime vision is only fair, but they can see far better than humans in semi-darkness. They can also distinguish brightness 7 times better than we do. As nocturnal hunters, their eyes are able to scoop up even the smallest scrap of available light. Their vision generally is blurred at the edges and they see best at 6 - 20 feet. When it comes to movement, though, the cat doesn't miss a twitch.

Important note: a cat's diet without taurine, a substance crucial for his eyesight, will make the cat go blind. Dog food lacks taurine, so never feed it to a feline.

Do cats see in color?

It was once believed that cats are colorblind, but now it is known that they can actually tell the difference between certain colors. Basically, they see the world in shades of blue and green. Though they see color, cats don't pay much attention to it. In nature, color isn't particularly necessary for a cat's survival success.

Why do all tabbies have an "M" on their foreheads?

Since most of the world's cats are tabbies, the distinctive M is a genetic feature passed on from generation to generation. This feature is part of the fur pattern. An Italian legend tells the story of a young cat being in the stable in Bethlehem during the Christ Child's birth. As the Child lay crying in the manger, none of the animals present could soothe Him to sleep. When the tabby jumped into the manger, snuggled close, and began to purr, the Infant Child responded as if to a lullaby and soon drifted off to sleep. Mary gave the tabby a gentle pet on the forehead. Where her fingers had touched, the little tabby was marked with an M as a symbol of the Madonna's eternal gratitude.

Why do cats flick their ears when they're asleep?

The cat's remarkable ears each have 30 (our ears have only 6 muscles) muscles that control the outer ear movements. These muscles rotate 180° so that a cat can hear without moving its head. Even though they may appear to be sleeping quite often, most of the time cats are only dozing, constantly searching the air for sound.

What's the purpose of that useless looking pad midway up the rear of the cat's leg?

It's called the carpal pad and its function serves as an anti-skid insurance policy for any crash landings as they race around full speed.

Why does the Manx cat have no tail?

The most common Manx cat legend says that the tail was lost because the cat was late boarding the Ark and Noah accidentally slammed the door on the tail. In fact, the lack of a tail is a true genetic abnormality that was first observed in the 16th century. The tail mutation is a serious defect. There is a hollow in the Manx's body where the tail should be. This distorts the rest of the spine so that the Manx has a backbone with fewer and shorter vertebrae. A true Manx is called a "Rumpy"; if he has a tiny tail, he's a "Stumpy." He is also called a "Bunny" because his strong back legs are longer than his front. As a result, he runs with a hop.

Why is a cat's tail so flexible?

The cat's tail contains between 14 and 28 caudal or tail vertebrae, linked like a string of beads. Even the tailless Manx has three tail vertebrae, even though flexibility isn't one of the Manx's strong points. Aside from the short tail, a Manx looks like an ordinary cat.

Why do cats have three eyelids?

The third eyelid is actually a tiny triangle of pinkish or whitish tissue that is sometimes visible in the corner of the cat's eyes. It's called the haw, or nictating membrane. Humans have something like it - the small pink bump at the inner corner of the eyes. In the cat, the haw rises automatically and then moves sideways across the eye to protect or lubricate its sensitive surface. If the cat is ill, undernourished, or on the verge of catching a disease, the presence of the haw is a good indicator that the cat's health isn't up to par. The spontaneous movement occurs because pads of fat behind the eyeballs, which act as shock absorbers, start to shrink when the cat is in poor health. This is usually a signal to immediately take your cat to the vet.

Why do cats shed?

Shedding is a cat's way of going from their winter coat into a summer one. Less hair means a cooler body. Cats lose more hair in summer months because the increased light from longer days triggers the shedding process. The average house cat will also shed more because of electric lights, even near the light from a TV screen. Stress and illness are additional factors to cause more shedding.

Why do cats shed their claws?

Cats are the only animals who walk directly on their claws, not on their paws. It would be like humans walking on the tips of their fingers. Getting around on tiptoe, called digitigrade, is a particularly useful feature when it comes to moving at high speeds. Being the great hunter that they are, cats need to keep this skill very sharp. Contrary to popular belief, manicuring their nails on your furniture is not out of malice or sharpening the claws. Cats are tearing off the ragged edges of the sheaths of their talons when scratching. All year long, they shed their claws to expose new sharp ones beneath. Claws aren't just for protection. They are responsible for the cat's exquisite balance and amazing feats such as climbing, stretching, running, and grooming. Declawing not only physically afflicts a cat, but he is also psychologically anguished, deprived of his only defense and one of his most versatile tools for survival.

Why do cats retract their claws?

Cats pull in their claws to protect them and to keep them sharp. They need to be kept sharp for all the reasons explained above. Sharpened claws are needed to mark their territory as well. When scratching, sweat glands between the paw pads secrete a scent transferred to the tree trunk or other object (possibly furniture if a house cat). This is how the cat identifies the scratched area as his own. In the animal kingdom, the cat's retractable claws are his most remarkable feature. When the legs are extended, the paws automatically expand to extraordinary size and the claws appear.

The cat has a toasty body temperature of 102°. A good percentage of the nutrients he gets from his daily food intake (approximately 30 percent) is devoted to making his skin and coat supple and fuzzy.

Why do cats like to sleep in the sun?

Cats like to feel warm and secure before they fall to sleep. They also use the sunlight to help make up the slight drop in body temperature that happens once they fall asleep. Some cats will change their sleep positions to follow the movement of the sun.

The wacky, day dreamy state cat's experience around catnip is actually a response to the herb's powerful natural chemical, trans-nepetalactone. It's almost identical to the essence excreted by female cats, which is why tom cats seem to love catnip the most. However, this doesn't explain why females love it as well. Catnip was once thought to be an aphrodisiac, but scientific tests have dismissed that theory. Cats aren't attracted to it until they are at least two months old. If introduced to catnip prior to this age, most cats will not respond to it at all when they are older. The herb valerian will give cats the same sense of ecstasy as catnip. Valerian is a mild stimulant and, though it doesn't do any harm, it shouldn't be offered to cats with kidney ailments. By the way, both catnip and valerian produce ecstasy through the odor, not the taste.

Great Costumes for Your Pet For Halloween