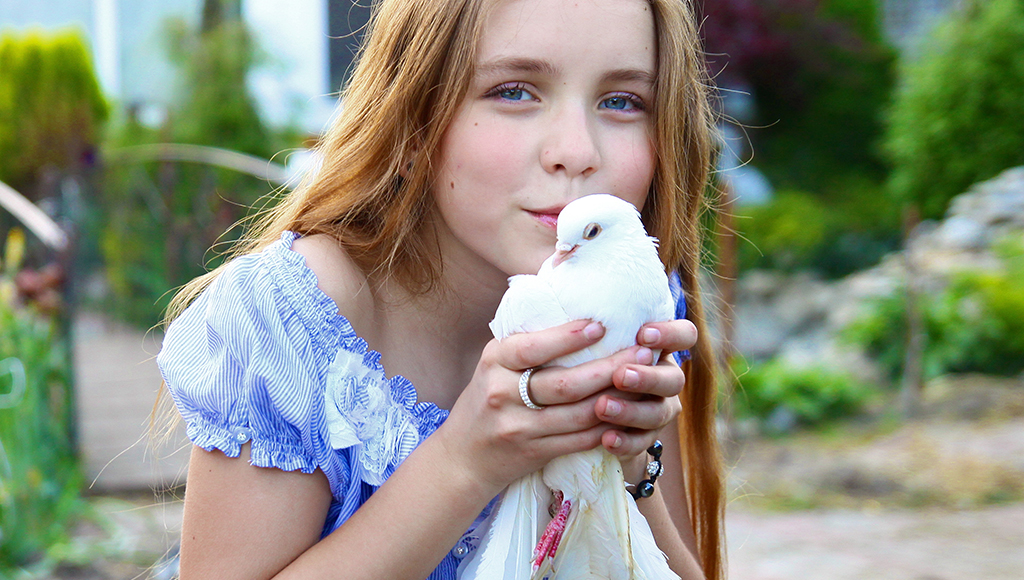 Doves and pigeons, domesticated for thousands of years, have been used in the past as sacrifices to gods, raised for food and also kept as pets. Pigeons have carried messages across battlefields and from town-to-town, been couriers of news from distant relatives or reporters, and transported vital medications to dying people. Nowadays tame pigeons are still used to carry messages, but more commonly raised for racing, meat, scientific experimentation and "white dove" releases at weddings. A few species of doves are raised as pets and the white Ringneck Doves are often used in magic shows.

Wild dove and pigeon hunting is still a popular sport. Over 300 species of the family Columbidae, the classification name for doves and pigeons, exist in the world. The United States has nine native and four introduced species of doves or pigeons.

The difference between doves and pigeons is mostly size. Doves are generally sleeker and smaller with pointed tails, while pigeons are larger and stockier with rounded tails. The common urban pigeon is also known as a "Rock Dove." The popular white dove releases at various celebrations are billed as "dove" releases, but ethical companies always use white homing pigeons, as they return home.

Doves and pigeons make excellent pets for a variety of reasons:

The most common doves kept as pets are the Ringneck and Diamond Doves. The Ringneck Dove has been bred in over 40 color mutations: white, peach, fawn, and apricot, to name a few. It is also known as the laughing dove, collared dove, Barbary dove or turtledove. The white mutation is sometimes called the Java dove, peace dove, or sacred dove.

Color mutations of Diamond Doves include cinnamon, brown, brilliant, yellow, snow white, white tailed, and silver. The Diamond Dove, sometimes called the Little Dove or Little Turtledove, belongs to the genus Geopelia that includes five small, long-tailed doves that eat grains and live in the relatively open savanna and semi-arid regions in Australia. One of the five species, the Zebra Dove, has a range that extends into Southeast Asia and have been imported into and become feral in Hawaii and parts of the continental USA. Four of the species have barred plumage while the Diamond Dove has spotted plumage.

Diamond Doves were imported to Europe in the late 1800s. They were raised in the London Zoological Garden as early as 1868. They have become one of the most popular of aviary birds and are an excellent choice for beginners. They rarely get sick and can be kept with other small, peaceful, birds such as finches. They also do well inside and are best kept in pairs. They can live up to fifteen years in captivity, with an average life expectancy of ten years.

The Diamond Dove is one of the smallest of the Australian doves, weighing less than an ounce (23 to 27 grams) and about 7-1/2 to 8-1/3 inches long. Adults have a gray body, creamy-white abdomen, blue gray and chestnut wing feathers with white diamond specks on the wings, a long tail with white tipped outer tail feathers and dark gray bill. The legs and feet are pink. The adult birds' eyes have orange irises with a pronounced orange-red orbital ring and can often be sexed by the thickness of the eye ring and the color of the wing feathers. At maturity (about one year), the males have a silver gray color and a wide eye ring (about 2-3 mm). The females tend toward a brown gray color and have a thinner eye ring (about 1 mm thick).

Diamond Doves have a variety of cooing calls. Birds in captivity will sometimes imitate human coos, too. They are very affectionate -- when one bird of a pair returns to a nest they often greet each other with very low, raspy coos. At night, if they are not nesting, they cuddle with each other and give their mate a series of very rapid light pecks around the neck and head while slightly shaking their wings. When mated birds become separated they will make a two-note call until they become reunited.

Want to learn how to save on your pigeon and dove's veterinary care ? Click here

As with all birds, Diamond Doves need enough cage room to move around, roost and exercise comfortably. A pair can be kept in as small as an 18 inch square cage but should be allowed free indoor flight every day. Minimum flight cage size should be 3'x 4'x 6'. They should never be allowed outdoor free flight as they lack the "homing" instinct of pigeons.

Clean, fresh water is essential. Water bowls should be open and fairly deep as doves suck water into their bills. Offer a bathing dish once or twice a week with about 1/2 to 3/4 inch of luke-warm water, or mist the birds with a clean spray bottle. Cages should be located in a draft free area away from heating and cooling outlets, open windows, fireplaces and kitchen cooking fumes. If the cage is in a dark room or if the area becomes very cool, add a light attached to a timer. Vitalites, although expensive, provide a healthy light spectrum.

These birds are happiest kept in mated pairs, but unless you want a lot of birds, you should remove the eggs once laid. Males can become territorial and may fight, especially if there is a female present. Females usually get along well together.

They eat small whole seeds such as millet, canary grass, milo and wheat (a vitamin-fortified finch mix would work well) and are primarily ground feeders so should be provided separate seed, water and grit containers on or close to the floor. Also provide a cuttlebone, at least two natural-type perches of varying height, size and spacing, a small canary-type nest and dried grasses for nest building. Millet seed sprays, fresh greens, an occasional piece of whole wheat bread, hard boiled egg yolk and small meal worms are welcome treats. Grit should include crushed eggshells or oyster shells for calcium, sand for food grinding purposes, and tiny bits of charcoal as a digestion aid.

Diamonds are devoted and very affectionate birds. When one bird of a pair returns to a nest they often greet each other with very low, raspy coos. At night, if they are not nesting, they often cuddle with each other and exchange very rapid light pecks around the neck and head while slightly shaking their wings. When separated, the birds give a two-note call until they become reunited.

Diamond Doves are charming birds and make a wonderful addition to any aviary. They are particularly suited to apartment living, as they are fairly quiet, clean and non-destructive. They can be tamed with gentle and persistent handling, but will be friendliest if purchased young from a small breeder who has handled the babies from the time they are hatched. Although they will never talk and most likely won't learn "tricks", they are beautiful and will provide hours of quiet entertainment and pleasure.

Ringnecks can be kept alone and tame quite easily, even as adults, with lots of patience. Let the bird see you often, always use gentle, slow movements, talk softly, and offer treats from your open palm, and within a few weeks the bird should trust you enough to step up onto your finger. If a bird raises its wing vertically over its shoulder and backs away, withdraw and try again later. Frightened doves can bash against the cage bars with enough force to injure themselves. When cornered, a terrified dove will "slap" you with its wing, although most doves won't bite or peck. Males tend to be quarrelsome with other males so it is best to keep them singly or in mated pairs.

If you let your doves out, be prepared for them to fly up to the highest curtain rod and down to the floor to walk around the room looking for tidbits or nesting materials. They will return to their cage in time. Their droppings are well formed and harden quickly, so are easy to pick up with a vacuum cleaner. Don't be alarmed if your doves spend a few moments each day lounging on the bottom of their cage or on the floor, as long as they get up and go back to their perches within about an hour or so. Doves all exhibit this 'couch-potato' lounging posture, particularly in the afternoon, which is 'dove rest-period.'

Pigeons are not often viewed as pets. Most pigeons are bred to race, to show or to be used for food. Urban feral pigeon populations are considered nuisances or health hazards and are often exterminated in large quantities. But the pigeon has a noble history, is one of the most loyal and devoted of birds, and, when raised with love and attention, can be a faithful and treasured companion.

Pigeons are a parrot's close avian relative. Pigeons bond easily with humans, especially those that feed them, and a tamed pigeon, kept alone, will become a faithful and loyal companion to its human. Maintaining a mated pair is not necessary, and unless you are racing or showing them, you probably don't want any extra birds.

Caging needs to be large enough to allow the bird wing-flapping room and to avoid striking tail or wing feathers on the sides. Just like with doves, these birds are ground feeders, so provide their seed, water and grit on or near the floor of the cage. Install at least two natural-wood perches or a shelf and a perch. The shelf should be at least 6 inches deep and be the highest of the perches. Pigeons enjoy fresh seed gasses and other greens, whole wheat bread snacks and whole seeds such as safflower, popcorn, peas and other grains. Commercial pigeon seeds or pellets are available at most feed stores. They need larger grit than doves and also should have some eggshell or oyster shell available for calcium. Fresh daily water in a 2" deep dish is essential. Pigeons love to bathe, to provide a large, flat 1-2" deep dish of water at least twice a week.

The only way to determine the sex of most pigeons is by behavior. At maturity, males tend to bow and coo and strut with fanned tails around their object of affection. They are quite vocal. Females are more demure.

A pet pigeon can be a true delight for the enlightened and informed.

Should I Buy an Automatic Pet Feeder?

Ask Dr. Jenn: We want to start raising backyard chickens. What do we need to know?

Read More Ask Dr. Jenn: We want to start raising backyard chickens. What do we need to know?