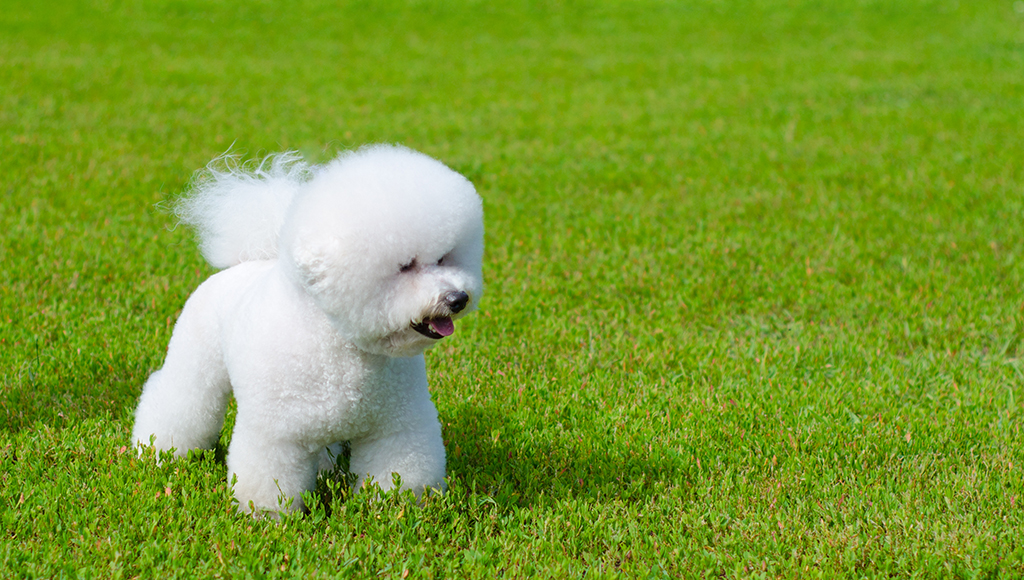 The Bichons are descended from the ancient ancestors of the Poodle, the Barbet. From this, the Barbichon, a small curly coated water spaniel, another name for this family, was created. The Bichons are a Mediterranean breed, generally named for the region from where they originated. The original breeds were the Bichon Tenerife, from the Canary Islands; the Bichon Maltais, or Maltese; and the Bichon Bolognese, or simply Bolognese. Ultimately, most of the modern Bichon breeds have developed by introducing a variety of dogs to the Barbichon type, creating a family with recognizable characteristics in both temperament and type but no single distinct ancestors.

Because of their merry disposition, they traveled much and were often used as barter by sailors as they moved from continent to continent. The dogs found early success in Spain and it is generally believed that Spanish seamen introduced the breed to the Canary Island of Tenerife. In the 14th century, Italian sailors rediscovered the little dogs on their voyages and are credited with returning them to the continent, where they became great favorites of Italian nobility. Often, as was the style of the day with dogs in the courts, they were cut "lion style," like a modern-day Portuguese Water Dog.

The Bichons were the court dogs of medieval Europe, especially finding favor in France, Italy and Spain. The French word bichonner, which means to pamper or doll up, derives from the beribboned and lavish lifestyles of the Bichon of Henry III of France, who was carried in a little basket wherever the King went. Bichons buzz around with energy and suffer from separation anxiety.The Bichon Frisé, a type of bichon, is sometimes simply called a bichon in North America.

The Bichon Frise is a small and sturdy dog with a dark-eyed inquisitive expression and a plumed tail it carries merrily over the back. The breed is often compared to a cotton ball due to its curled double coat, which consists of a textured outer coat and a silky undercoat. The coat is white, but may have shadings of buff, cream or apricot around the ears or on the body.

Bichon is the name for a type of related non-sporting category dog breeds. They vary in appearance, but all have tails curled over their back, a coat that is hair rather than fur that doesn't readily shed, short snouts, drop ears, and large, dark eyes. They were all bred to be amiable companion dogs and have a friendly, alert temperament. Their life expectancy is 15 years or more.

Want to learn how to save on your bichon frise's veterinary care? Click here

The AKC refers to the Bichon Frise as "merry" and "cheerful", and the breed standard calls for a dog that is "gentle mannered, sensitive, playful and affectionate". Bred to be companion dogs, the Bichon Frise tends to get along well with both children and other animals. Though not considered a retriever or water dog, the Bichon, due to its ancestry as a sailor's dog, has an affinity for and enjoys water and retrieving. On the boats however, the dog's job was that of a companion dog. Bichon Frises are very obedient if training is started early and continued consistently.

Bichon Frises often appear on lists of dogs that do not shed, but this is misleading. The grooming required to maintain the Bichon Frise's coat helps remove loose hair, and the curl in the coat helps prevent dead hair and dander from escaping into the environment, as with the poodle's coat. The frequent trimming, brushing, and bathing required to keep the Bichon looking its best removes hair and dander and controls the other potent allergen, saliva.

Bichon Frises are considered suitable for people with allergies as they are bred to be hypoallergenic. However, it is important to note that, human sensitivity to dog fur, dander, and saliva varies considerably. Although hair, dander, and saliva can be minimized, they are still present and can stick to "clothes and the carpets and furnishings in your home"; inhaling the allergens, or being licked by the dog, can trigger a reaction in a highly sensitive person.

Bichon Frise have an average life span of about 12–13 years. This breed's longevity is similar to other breeds of its size and a little longer than for purebred dogs in general. Bichons are also prone to liver shunts. These often go undetected until later in life, leading to complications that cannot be fixed, and therefore liver failure. Bichons who are underweight, the runts of the litter, or have negative reactions to food high in protein are likely to be suffering from a shunt. When detected early, a liver shunt can often be corrected through surgery. However, the later in life the shunt is detected, the lower the likelihood of surgical success becomes. Shunts can be kept under control through special diets of low protein.