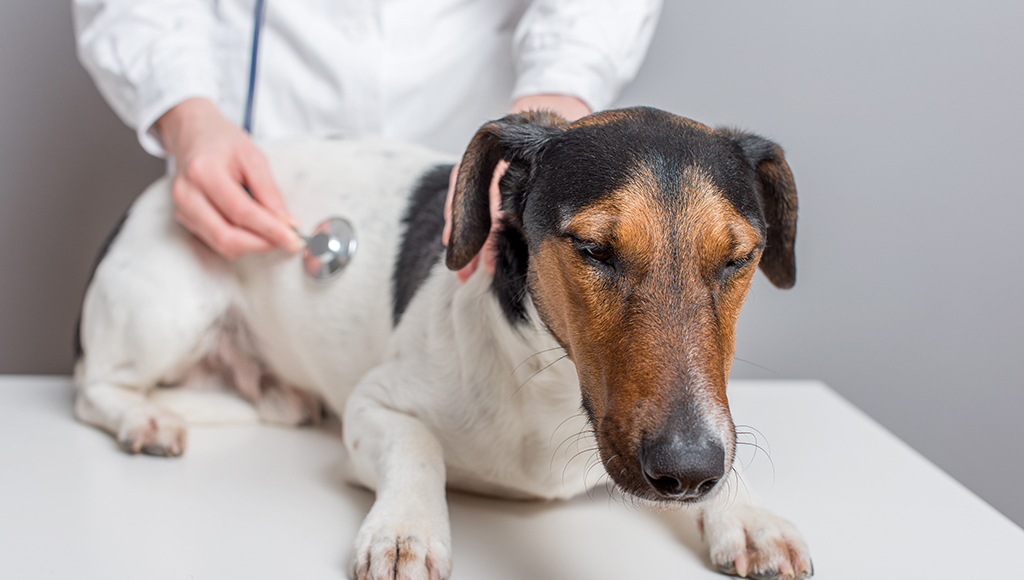 Yes it's true-animals can get bloated too. It's a little different than with people, and can be a lot more dangerous. If your veterinarian says that your dog has bloat, she means that your dog's stomach is full of excess gas, fluid, or foam. Bloat can be caused by a number of things. Most often dogs and cats get bloat because they swallow excess air. It can also occur when the valve at the bottom of the stomach is blocked and the gas and other material produced by the digestive process can't exit the stomach properly.

Bloat happens very rapidly and can be fatal in as little as 30 minutes, when it is severe. If your pet's abdomen is distended and/or you notice nausea, vomiting, attempts to vomit, sudden weakness, or collapse, contact your veterinarian immediately! Bloat is a life-threatening condition.

Want to learn how to save on bloat treatment? Click here

Often, when the stomach becomes enlarged (or dilated), it then twists somewhere between a quarter and a full turn; the twisting is called volvulus. When an animal has gastric dilation and volvulus (GDV), the openings at the top and bottom of the stomach twist, blocking all materials from entering or exiting properly. As the digestive process continues, the stomach will continue to swell more and more. As the stomach gets larger, it can press against vital blood vessels and decrease circulation which can eventually lead to death of the tissue in the stomach walls. The swollen stomach can also take up some of the room the diaphragm needs to expand, which makes it difficult for the animal to breathe. If this condition is left untreated, the circulation and breathing problems caused by GDV and bloat can cause infections, bleeding disorders, heart failure and sudden death. GDV is most often found in larger dogs that have eaten a large or abnormal meal.

The most obvious sign of bloat is a distended, swollen-looking belly, particularly one that appears quickly. Some other noticeable symptoms of bloat occur when an animal tries to empty its stomach. Particularly with GDV, dogs and cats will try to vomit or belch but aren't able to; they will retch and seem restless and nauseated. They may also become short of breath as their abdomens become compressed. Some animals may act depressed or show signs of pain. In severe cases, the pressure the stomach places on blood vessels can cause irregular blood flow, abnormal heart rhythms, and shock, which can cause animals to collapse and can lead to rapid death.

Want to learn how to save on bloat treatment? Click here

Bloat must be treated by a veterinarian immediately. If she suspects your pet has bloat, your veterinarian can stabilize him and treat him for shock by giving him intravenous fluids and monitoring his heart rate, breathing, and blood pressure. She can check for the condition by performing a physical exam and abdominal X rays. She can also check for gas in his stomach by inserting a tube through the esophagus or inserting a needle through the abdomen. If an animal is diagnosed simply with bloat, that is if the stomach hasn't become twisted, sometimes the veterinarian can simply decompress the stomach with the tube or needle and no other treatment is necessary.

On the other hand, if an animal has GDV, he will most likely need to be treated surgically. During surgery, a veterinarian can untwist and reposition the stomach so that material can move through it normally. Your vet can examine the tissue of the stomach to make sure it wasn't injured or deprived of blood when it swelled. She can also check the spleen, which is attached to the stomach and may have been damaged when the stomach twisted. Often a veterinarian will also perform a gastropexy during surgery, which involves attaching the stomach to the abdominal wall so it won't twist again in the future. A dog that has had bloat is at a great risk of GDV in the future if a gastropexy isn't done.

Because the causes of bloat aren't entirely clear, there is no known way to prevent it. However, veterinarians do know that large breed dogs with broad, deep barrel chests are more likely to develop bloat than other animals. If you have a breed like this, it’s a good idea to always be mindful of this condition and watch carefully for bloat. You can also feed your pet small, regularly spaced meals, which are less likely to stretch his stomach, rather than fewer, larger-sized meals. Another good idea is to presoak the food in water for 30 minutes before feeding your dog. You can prevent him from drinking large volumes of water at one time, too. Limiting exercise after meals can help as well. When animals run with a full stomach, the stomach swings like a pendulum and has a greater chance of flipping over and twisting itself. Eating something out of the garbage or eating anything else they aren't used to can also cause animals to develop gas, which leads to bloat and GDV.

The best way to protect your pet against bloat is to keep a close eye on him and watch for any strange behavior. If you notice anything about your pet that seems new or unusual, contact your veterinarian immediately. It’s always better to take an extra trip to the vet, rather than skip one, to help make sure your pet remains healthy and happy.

What to Do If Your Microchipped Pet Is Lost

Ask Dr. Jenn: What are some things I need to be cautious of around the holidays?

Read More Ask Dr. Jenn: What are some things I need to be cautious of around the holidays?