Do Cats Have Their Own Language?

Cats communicate with other animals and their owners with a variety of sounds. 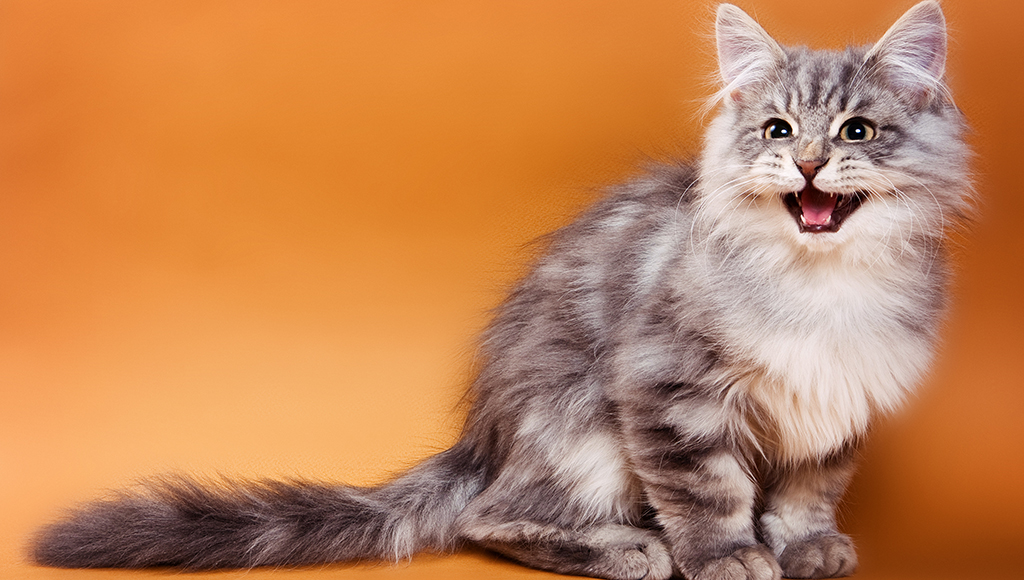 A feline's vocal apparatus differs from our own and is not designed with actual speech in mind. However cats still need to communicate, both with other cats and animals and with their human companions too. Cats "speak" to each other through body language, communicating feelings and intentions through posture and facial expression as well as sound. Humans do this too, but are able to rely more on on verbal expression because of their ability to talk.

Scent is also an important component of cat communication. In addition, Cats have a vocabulary of sounds ranging from caterwauls to mewing sounds, from hisses to the "silent meow" which is probably a sound pitched too high for human ears to hear.

Cats make a variety of different sounds which some people might call "words." While these are not "words," in a grammatical sense, they do comprise a cat's language. Below are some interpretations of the various noises and vocalizations cats use:

Want to learn how to save on your cat's veterinary care? Click here
Want to check pricing and try our veterinary discount program, risk-free? Click here

There is more to felinese than the simple miaow though. In 1944, Mildred Moelk made a detailed study of cat vocabulary and found sixteen meaningful sounds, which included consonants and vowels. She divided cat-sounds into three groups:

Although these may not be used in grammatical sentences, one definition of language is "any means, vocal or other, of expressing or communicating feeling or thought" (Webster's Dictionary). Observant owners will notice the following sounds which cats make to communicate their state of mind. This list is not exhaustive, since cats have individual personalities and will improvise:

The exact meanings of all of these sounds may be modified or emphasized by facial expression, tone/volume, frequency and body language depending on the current situation. Some cats may use some of these cat-sounds in different ways when communicating with humans and only our familiarity with our own pets tells us for instance that a certain type of growl is a playful noise and not warning of imminent attack.

Volume is sometimes used for added emphasis (e.g. a strident miaow for urgency, a gentle "burp" for contentment). Cats which simply feel compelled to add their personal point-of-view to a conversation often do so in a neutral tone of voice to indicate that they are not being particularly hostile, nor unduly friendly, and that there is no great urgency about the subject matter.

Are some breeds more talkative than others?

Siamese cats are well known for being quite vocal, but are often simply dismissed as noisy, yowling cats. Siamese vocabulary includes "a very long mew of medium pitch" which is often emitted soon after the cat is let into a room. This is possibly purely conversational, serving to inform those in the room that it has arrived and is passing the time of day. A far more plaintive sound is made when cats wish to be let in or out, or to attract attention to themselves if they feel they have been unjustly ignored.

Burmese are also a very vocal breed, but as a result of having a slightly narrower range of pitch than the Siamese, they rely more on variations in length and volume of their mews to provide a large number of different ‘remarks’. In contrast, British Short hairs tend to show the reserve traditionally attributed to their human counterparts; they vocalize a lot less than the Oriental breeds, and their mews, when uttered, are usually quite brief. However; though brief, a range of pitches can still be detected. Sharp sounds generally signify distress or impatience, while those of medium pitch are used for less urgent situations such as polite request for food. A mew emitted whilst purring usually means the animal is contented.

Long-haired breeds, on the whole, have rather high-pitched voices, and unless they are extremely upset the volume of their mews is fairly low. In their attempts to communicate with us on our own level, some cats put together full "sentences" of noises and pauses. They might simply be inviting us to talk back to them as most cats really enjoy this sort of attention and interaction from their owners.

What does a cat's purr mean?

Purring is caused by vibration of structures in the throat. Although not strictly a vocalization, the purr is an important means of communication, and depending upon the cat's situation, it can convey contentment, pleasure or be placatory behavior (i.e. "I am not a threat to you"). As well as purring when happy, cats also purr when severely injured, frightened or giving birth. A cat may even purr when close to death.

It is also believed that the familiar purr generally associated with contentment, is also exhibited by a cat when he is being restrained for veterinary procedures (blood samples or X-rays). The inference drawn from this behavior is the cat indicating that he is tractable and co-operative and does not need to be forcibly handled. This purr is likened to behavior of a subsmissive cat attempting to avoid conflict with a larger, more powerful animal or human.

Benefits of Owning a Pet