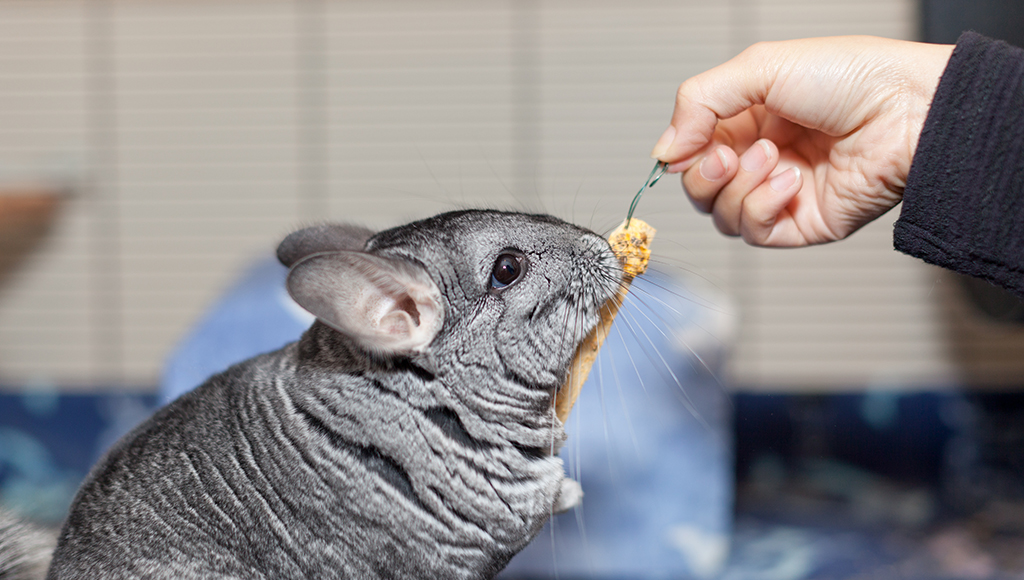 Adorably cute creatures, Chinchillas are not for everyone, although domestic chinchillas can be kept as pets. Chinchillas are crepuscular, which means they are primarily active during twilight hours of dawn and dusk. They do not like to be disturbed during the day, which may make them less favorable as pets to some people. Chinchillas are naturally very skittish little creatures and generally do not like to be held, although they can become very attached to their owners. Because of their high-strung disposition, they are not usually considered to be good pets for children. However, chinchillas can be very friendly animals if sufficiently acclimated to human touch as kits (when they are babies), making them excellent pets for patient owners.

Chinchillas can be very docile if given sufficient attention as babies. Captive chinchillas commonly live 15 years, but some have been known to live up to 20 or more. Chinchillas are vocal creatures, which make a variety of sounds including chirps, squeaks, and barks. They use these sounds to locate each other and express themselves. The various sounds mean different things: a loving chirp signals the chinchilla is calm and content, a high-pitched squeak (usually give to its parents) signals hunger and a loud, aggressive bark indicates the tiny creature is frightened or feels threatened. Since Chinchillas are active at night, it is not uncommon for them to vocalize in the early hours of the morning. If irritated or frightened, female chinchillas may cluck loudly and spray urine at the offender. When housing more than one Chinchilla, they can be housed with others of the same sex; however, it is possible that they may fight. Fighting or getting along depends on the individual animals. If the chinchillas are either introduced when young, or gradually introduced when older, conflict can be reduced. Excessive conflict and violence is dangerous and warring chinchillas must be separated. Males and females usually get along well, although they must be spayed or neutered to avoid reproduction. Typical reproduction rates are two litters per year of 1-3 kits. Male kits must be separated from their mother soon after weaning to prevent mating.

Want to learn how to save on your chinchilla's veterinary care? Click here

Since chinchillas are very active animals, it is best to house them in a large enclosure. If kept in a cage, the chinchillas need to have a large area replete with shelves of dried pinewood or other obstacles on which to play. The cage should be taller than it is wide, as the chinchilla's natural environment is very mountainous.

Chinchillas also need other forms of stimulation, such as hanging wooden toys or paper towel tubes. Chinchillas need extensive exercise and should have a large exercise wheel (over 15 inches in diameter works best) with solid surfaces. Chinchilla legs and toes can easily get caught in a mesh running surface and tails can get caught in spokes. Wooden sticks and chew toys are good options, but conifer and citrus woods (like cedar or orange) should be avoided because of the high content of resins, oils and phenols that are toxic for chinchillas. Birch, willow, apple tree, Manzanita or kiln-dried pines are all safe woods for chinchillas to chew. Plastic in the cage should be avoided at all times. Chinchillas are voracious chewers, and any ingested plastic can cause blockage in the intestines. The best products for in-cage bedding are pine or aspen wood shavings; paper pulp based products, as well as a variety of recycled products, though newspaper products may contain inks, dyes and other chemicals from the paper making process. There is some controversy over whether they should be given cedar shavings, as the oils in the wood are particularly aromatic and could cause problems in animals with respiratory sensitivities. If odor is a serious concern, kiln dried pine bedding is probably best, as the natural properties of the wood control odor and absorb ammonia. Recent research suggests that paper pulp beddings may allow very high concentrations of ammonia to build up in cages, especially those with little ventilation.

The cage must have good air circulation. The chinchilla lacks the ability to sweat; therefore, if temperatures get above 25°C (80°F), the chinchilla could get overheated and may suffer from heat stroke. Chinchillas dissipate heat by routing blood to their large ears, so red ears signal overheating. Do not use ice or water to cool down a chinchilla, put ice inside a closed metal container the chinchilla can lean against.

Active and inquisitive by nature, chinchillas need to spend some time outside of the cage (around half an hour a day and always supervised) to exercise and to satisfy their curiosity. Chinchillas will chew on inappropriate items including electrical cords; so do not let them out of our sight. Chinchillas are very inquisitive - actively exploring and interacting with their surroundings.

Chinchillas can be found in a variety of colors including the standard gray (the only color found in the wild), beige, white, ebony, and several others. They instinctively clean their fur by taking dust baths, in which they roll around in special chinchilla dust made of fine pumice. In the wild their dust is formed from fine ground volcanic rocks. The dust gets into their fur and absorbs oil and dirt. These baths are needed a few times a week. Chinchillas do not bathe in water because the dense fur prevents air-drying and retains moisture close to the skin which can cause fungus growth or fur rot. A wet chinchilla must be dried immediately with towels and a no-heat hair dryer. The fur is so thick that it resists parasites such as fleas. The fur also reduces loose dander, making chinchillas hypoallergenic.

Chinchillas eat and digest desert grasses and cannot efficiently process fatty foods, high protein foods, or too many green plants. A high quality, hay-based pellet and a constant supply of loose hay will sufficiently meet all of their dietary needs. Chinchillas have very sensitive GI tracts that can be easily disrupted so it is important to maintain them on a healthy diet. Avoid chinchilla feed that includes a mixture; chinchillas may avoid the healthy high fiber pellets in favor of items like raisins and seeds. Fresh vegetables and fruit (with high moisture content) should be avoided as these can cause bloat in a chinchilla, which can be fatal. Sweets and dried fruit treats, such as raisins should be limited to two or three per week. Chinchillas also eat and drink in very small amounts, and therefore overfeeding is common. It is important to maintain the same amount of food on a daily basis. Overeating can cause diarrhea, or in the long term, diabetes. Nuts should be avoided due to their high fat content. High protein foods and hay (such as alfalfa) can cause liver problems and should be limited.