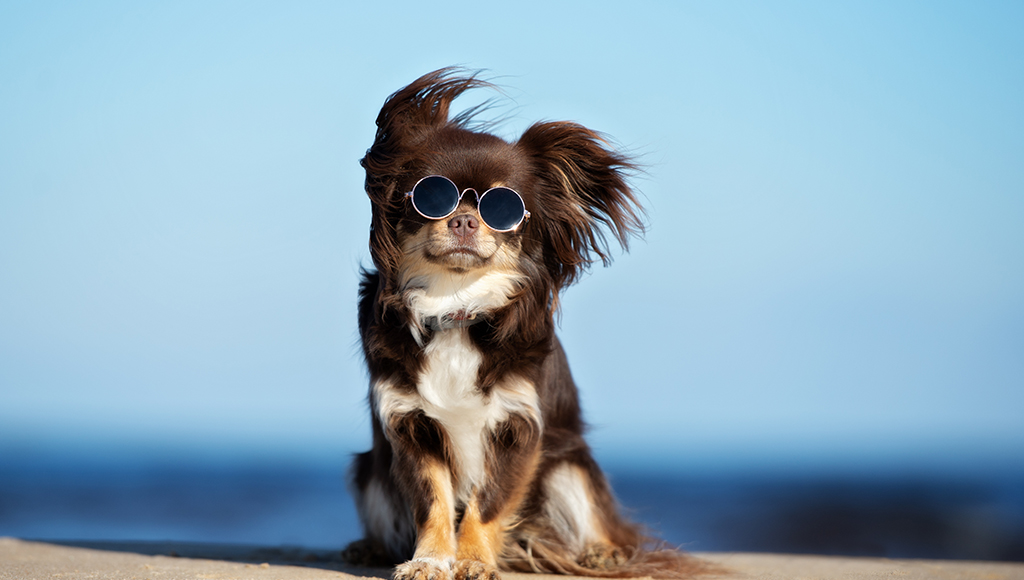 With their big ears, small size and ferocious attitude, the Chihuahua packs a lot into a small package. This pint-sized pooch fears nothing and will make sure his presence is known at all times! Usually popular among apartment dwellers and the elderly, because of their small size, tough spirit and intelligence, Chihuahuas have grown in popularity in recent years.

The Chihuahua takes its name from the Mexican state abutting west Texas and New Mexico. It likely came from the ancient Techichi dogs of the Toltecs crossed with hairless dogs from the Orient. Historians describe the Techichi as a heavy-boned small dog with a long coat indigenous to Central America and definitely connected to the Toltec civilization near present-day Mexico City. The Techichi was larger than the modern Chihuahua and was mute.

The Aztecs conquered the Toltecs and adopted the little dogs as sacred icons of the upper classes, used in religious ceremonies as an atonement for sins and as guides for the spirits of the dead. Somewhere along the way, it is believed the Techichi was crossed with an Oriental hairless breed that made its way to the New World via the Bering Strait land bridge, producing the smaller, smooth-coated, vocal Chihuahua we know today. Discovered in Chihuahua State in the 1850s, this breed was first registered with the American Kennel Club in 1904.

The Chihuahua is the smallest of the AKC registered breeds, weighing from two-to-six pounds. Chihuahuas range from six-to-eight inches tall and the body is slightly longer than it is tall.

The overall appearance is of a fine-boned but sturdy dog. The head is distinctive with its rounded skull, large eyes, and large ears that perk upright when the dog is alert, and flaring out to the sides of the head when the dog is calm or resting. The muzzle is moderately short and slightly pointed with teeth arranged in a level or scissors bite.

The Chihuahua has a graceful neck with a slight arch that slopes gracefully into the shoulders. The top line is level, the ribs rounded and its tail fairly long sweeping up in a curvy, sickle shape or as a loop that touches the dog's back.

Chihuahuas have a soft, glossy, and close coat that is full over the body while scant on the head and ears. The long-coated variety have a longer, softer coat that can be flat or slightly curly and must have an undercoat. The tail on a long coat resembles a plume; the ears, feet, and legs are feathered too; with a ruff around the neck. Either variety's coat can be any solid color or marked or splashed with color on a white background.

Want to learn how to save on your chihuahua's veterinary care? Click here

The official AKC standard for the breed describes the Chihuahua as “A graceful, alert, swift-moving little dog with saucy expression, compact, and with terrier-like qualities of temperament.” However, some Chihuahuas carry this temperament to the extreme and can be grumpy, haughty, or downright nasty when provoked – and provocation may come too easily.

With a reputation for being suspicious of everyone but his owner, and a fierce dislike of any breed but his own, makes the Chihuahua an unsuitable pet for households with small or boisterous children. On the other hand, he may be perfect for an elderly couple or individual who love to pamper, as well as for those who live in apartments, or who live on a small budget. Unfortunately because of his "feisty disposition" the Chihuahua’s curiosity, intelligence, and loyalty to and affection for his owner often get too little attention. In the right circumstances, a Chihuahua is a wonderful companion.

This breed is sturdy and healthy and can often reach 16 or more years of age. However, there are some genetic diseases that can cause problems. Like most toy breeds, the Chihuahua is susceptible to slipped stifles (a knee injury caused by joint weakness) and fractures and may suffer from jawbone disorders, eye problems, heart disease, and tooth and gum complaints. The potential for some of these problems can be minimized by buying from a breeder who tests breeding stock for inheritable problems and by careful management. For example, Chihuahuas should not be allowed to jump off high furniture or out of your arms as the impact on landing could fracture a leg. Children should not be allowed to carry a Chihuahua or to play roughly with one for the same reason.

The Chihuahua is also born with a soft spot on the top of his head that may not fully close, so a blow here could kill him.

The Chihuahua tendency to shiver or tremble is not a health issue but takes place when the dog is excited or stressed. One explanation is the smaller breeds have a higher metabolism and so dissipate body heat faster than larger dogs. Shivering helps to generate body heat – that’s why people shiver when they are cold. However, rapid dissipation of body heat is a distinct disadvantage in cool or cold climates, so Chihuahuas should always be protected when taken outdoors in these areas. Fortunately, there are dozens of styles of protective coverings available.

The Chihuahua as pet

The Chihuahua’s loyalty and affinity for being close to his master or mistress makes him an amiable companion, and his size makes him a convenient one. Chihuahuas have been known to ride about inside a pocket, in a purse or tote bag, or tucked firmly under the arm of their owners. They fit nicely in soft-sided pet carriers for an airplane ride or a jaunt in the car, and they enjoy outings immensely.

At home the Chihuahua is curious and mischievous. Left to his own devices, the little guy might decorate the entire house with a roll of toilet paper, make confetti out of the mail, or commandeer your bed or favorite chair as his own. Although he is not much bigger than a than a cat, his big attitude and haughty spirit could easily make him master of the household, for he can manipulate owners with great finesse.

Chihuahuas have a distinct liking for others of their own breed and an equally distinct dislike for dogs of other breeds. Therefore, if you want more than one dog, make the additional dogs Chihuahuas. And if you already have a dog of another breed, consider carefully before getting a Chihuahua.

Want to learn how to save on your chihuahua's veterinary care? Click here

Like other small dogs, the Chihuahua faces a danger outdoors that does not threaten his canine cousins that weigh more than 15 pounds – he is just the right size for a meal for a bird of prey or a coyote. Large hawks, eagles, and owls in some city fringes and suburbs have been known to swoop down on smaller pets and carry them away.

The indomitable spirit of the Chihuahua also causes problems when the little dog wants to spar with a large breed dog, especially one with a dominant personality or more predatory nature. It is best to always keep a Chihuahua on a leash or carried in your arms so it cannot challenge a big dog to a duel it will surely lose.

If you are considering a Chihuahua, locate a responsible breeder, rather than scurry down to the local pet store, where puppies are more often purchased from breeders whose priority is profit without concern for the animals well-being or temperament. These small dogs are not the pet of choice for households with small children, and often a pet store will not share this information with you. A quality breeder, adamant about finding good homes for their puppies, will rarely place a puppy in a home with children under the age of 12.

Chihuahuas have small litters, often only one or two puppies - so the number of puppies available from responsible, quality breeders can be scarce. Responsible breeders will check parent dogs for genetic abnormalities, back their puppies with warranties and support the buyer with advice and assistance - doing their best to breed only dogs of good temperament.

Learning as much as you can about Chihuahuas before choosing one as a companion, will help make your new pet a joy for many years to come. His loyalty and love will reward you well.