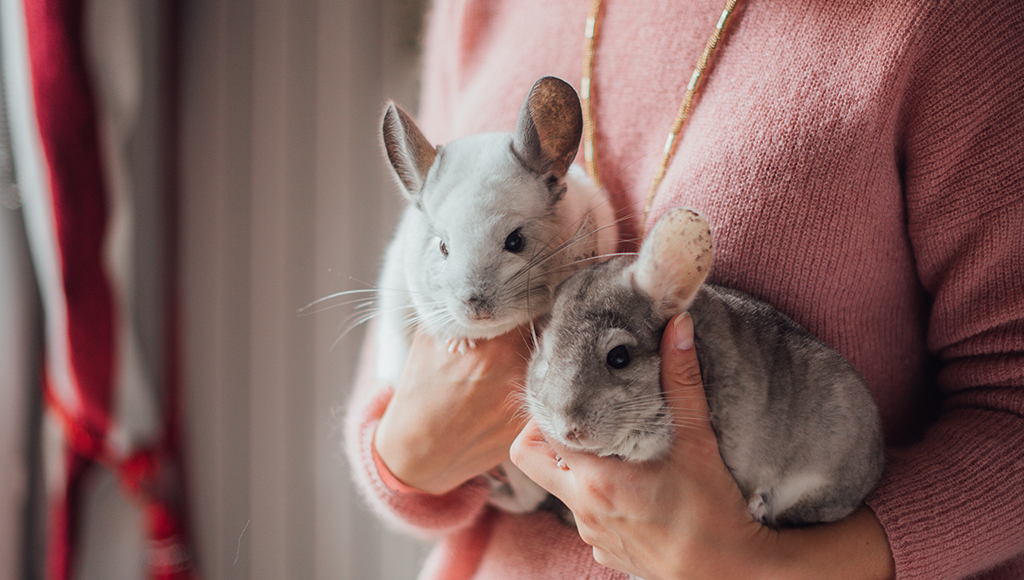 Chinchillas can make wonderful pets for the right person, but before deciding on a pet chinchilla, familiarize yourself with their unique characteristics and all aspects of their care. Learn about chinchillas, how to care for them, and what supplies you need to provide a home for a chinchilla in this chinchilla care guide.

Can I have a pet chinchilla?

Domestic chinchillas can be kept as pets. Chinchillas are crepuscular (animals that are primarily active at dawn and at dusk), somewhat nocturnal, and typically do not like to be disturbed during the day, which may make them less favorable as pets to some people. Chinchillas are naturally very skittish creatures and generally do not like to be held, although they can become very attached to their owners. Because of their high-strung disposition, they are not usually considered to be good pets for small children. However, chinchillas can be very friendly animals if sufficiently acclimated to human touch as kits (babies), making them excellent pets for patient owners.

Chinchillas typically live about 15 years, but living between 18-22 years is not uncommon. Although they are generally small creatures, their body length can grow from 10-14 inches, and their height about 5-6 inches.

With gentle handling from a very young age, most chinchillas will become quite tame and bond closely with their owners, although sometimes they do not like to be held or cuddled. They are very active and playful. Chinchillas can be kept singly, and will usually do fine as same sex pairs, especially if they are litter mates or introduced to one another at a young age.

Chinchillas are largely nocturnal so will be most active at night. Sometimes they are called crepuscular, meaning their activity peaks at dawn and dusk. In any case, they should be kept in a fairly quiet area during the day. They prefer a consistent routine for handling and feeding times and may be stressed out by changes to their routine. Since they are so active and playful, chinchillas need a roomy cage for exercise as well as their daily playtime. Warm temperatures are more of a concern for chinchillas than cool temperatures, so care must be taken that pet chinchillas do not become overheated.

Chinchillas require a lot of roughage, and the diet should mainly be made up of a good quality grass hay along with pellets made for chinchillas. Treats should be given in moderation (one teaspoon per day in total). The digestive system of chinchillas is fairly sensitive so any diet changes should be made gradually.

Chinchillas have very sensitive digestive systems, and feeding a good quality diet appropriate for chinchillas is essential to their health. In the wild, chinchillas naturally eat a diet of vegetation that is high in roughage. Chinchillas are not designed for rich or fatty diets, and such diets can easily cause serious digestive upsets. It’s recommended that you feed your chinchilla quality chinchilla pellets supplemented with plenty of fresh grass hay. If you are changing the diet, begin by mixing a small amount of the new food with the older food, and gradually increase the proportion of the new food. Also, treats must be limited to very small quantities to avoid upset.

Though we don't normally think of twigs and branches as anything special, your chinchilla will likely view them as a terrific treat. Twigs from apple trees and other safe trees can be given to your chinchilla. Make sure any wood you use has not been treated with pesticides, and do not give branches from toxic trees, including trees whose fruit has pits or stones, or evergreen wood.

Chinchillas are a small rodent native to South America, found in rocky, arid areas in the mountains. They are perhaps best known for their incredibly soft, thick, luxurious fur. In the wild this fur protects them from the elements, but in captivity it makes them somewhat susceptible to overheating. This must be considered when deciding where to place your chinchilla in the house. A cooler, quiet area of your home is the best place to put a chinchilla cage.

The larger the cage, the better. The minimum floor space needed is about 24 by 24 inches. A tall cage is best; if possible get a tall cage with shelves and ladders that allow the chinchilla to climb. Wire is the best cage material, and avoid plastic cages or accessories as chinchillas can chew and destroy plastic easily. The tray can be lined with wood shavings. Avoid cedar shavings, and hardwood shavings. Aspen or newspaper shavings are preferred over pine. Many chinchilla cages have a wire floor, which is nice for cleanliness but can be hard on a chinchilla’s feet, so are best avoided. Wire floors or shelves can be covered with wood to give the chinchilla's feet a break. A nest box, made of wood, should also be provided.

The cage should be placed in a quiet area of the home where human activities won't disturb or stress the chinchilla during the day. The cage should also be located in a cool area where there are no drafts and where it will not be exposed to direct sunlight which could cause overheating. Summertime temperatures must be monitored to make sure the ambient temperature is not much over 77 degrees. If you do not have air conditioning, placing a shallow pan of ice cubes in the cage may help, or you can drape a damp towel over part of the cage (the evaporation of water is cooling).

It’s a good idea to place the cage on a table or stand as this will help make the chinchilla feel secure (chinchillas can be intimidated if you must lean over the cage to interact with them).

Glass water bottles are ideal because the chinchilla can't chew through them. If you use plastic, encasing it or creating a barrier to it with wire mesh should reduce the risk of damage (you can also get commercial chew guards). For feeders, hopper style feeders that attach to the outside of the cage are nice because they can't be tipped over and the chinchilla won't be able to urinate in their food. If a food bowl is used it should be a heavy ceramic bowl to reduce tipping, and it must be cleaned daily.

Toys can also be provided too - blocks of wood and tree branches (free of pesticides) are good chew toys. Some of the wooden parrot toys make good toys as well, as do the willow balls and rings that you can find for rabbits. It is important to provide toys that do not have small or plastic parts that could be ingested. In addition, a "chinchilla block" or pumice block can be provided for chewing and this will aid in keeping your chinchilla’s teeth trim.

Wheels can provide excellent exercise, although you may find that unless the chinchilla is introduced to the idea at a fairly young age it may not take to running on a wheel. Try to use a 15-inch wheel (anything smaller will be too small for most adult chinchillas), with a solid running surface and an open side with no cross supports (wire wheels are dangerous to feet and tails).

Help Your Pet Get Over Ear Infections Fast

The Best Pets for Seniors