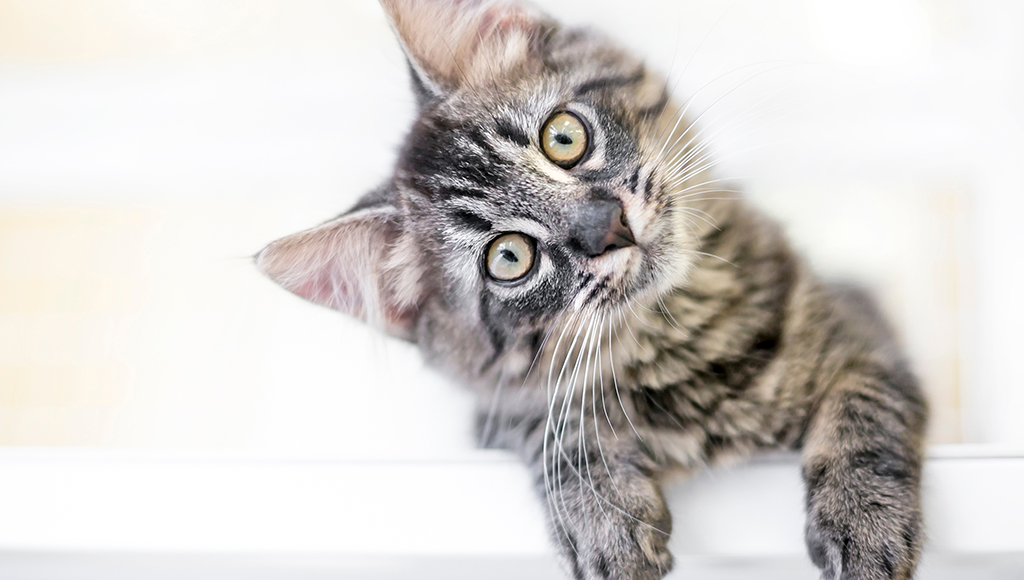 Why do cats arch their backs?

The cat's arching back is actually part of his complex body-language system. Not only does he arch his back as a form of stretching "sleepy" muscles after a nap, the arched back is also a form of showing that the cat is feeling threatened. In the latter case, the arched back is usually accompanied by his hair standing out all over his body, especially on his tail. He may even turn sideways to present an even more impressive profile to scare away a threatening animal. His arch is able to get so high because his spine contains nearly 60 vertebrae (humans only have about 34) which fit together loosely, giving him that incredible flexibility.

Why do cats suddenly take off at 90 miles an hour?

This behavior is due to pent-up energy that suddenly overflows. Cats are nocturnal beings and natural hunters. Even in an environment where there's nothing to hunt, or the cat no longer needs to hunt, he will feel the need to hunt anyway. At full hilt, a cat clocks an amazing 31 mph and covers about three times his own length per leap. Cheetahs, which are the fastest land animals, hit their stride at around 70 mph.

What does it mean when a cat does that unusual little hop?

When a cat zips over to you, bumps against your leg, quickly lifts both front paws off the ground together and puts them down again in a little hop like manner, it's generally reserved just for humans. It's a throwback to the head-to-head greeting behavior he learned from his mother. She would lower her head to make face-to-face contact and rub noses with him in order to mingle scents. Since humans are so tall, and a cat is so short, this is his welcoming greeting.

Why do cats rub against your leg?

When a cat rubs his head or the side of his chin against you, the furniture, or any object, he is actually depositing his scent on them as part of territorial marking. He uses his glands on his forehead and around his mouth and chin. These glands produce chemicals called pheromones, which he transfers by rubbing against objects. Cats can tell how long ago a scent was left and how much attention they need to pay to the warning.

Why do cats roll over and expose their stomachs?

A rare form of greeting, the ultimate compliment that a cat can pay to a human. This body language shows how much he cares for you and how comfortable he is around you. Totally exposing the stomach reveals how secure he feels, because the stomach area is the must vulnerable body part of the cat. He can be asking for a caress, inviting you to play with him, or may want the stomach area stroked. If he sleeps on his back this way, his trust in you is in the stratosphere.

Why do cats chase birds?

Cats are a bundle of instincts and are natural carnivores (meat-eaters). They will play with anything that moves because they are hunters. Never mind that the prey is a nutritionless, tasteless cat toy; they are simply doing what comes naturally.

Why won't cats come when called by their name?

More than likely, your cat won't answer your call because he is napping or something of much more interest is holding his attention, which translates - he doesn't see any reason to stop what he is doing.

Why makes a cat purr?

Cats (big and small) are the only animals who purr. Contrary to popular belief, purring isn't speaking. The purr comes from two membrane folds, called false vocal cords, that are situated in the larynx behind the actual vocal cords. Cats purr 26 cycles per second, the same as an idling diesel engine. Cats purr both when inhaling and exhaling, keeping the mouth completely closed. Scientists believe purring is produced by blood in a large vein in the chest cavity that vibrates and is then magnified by air in the windpipe. Kittens are born blind and deaf, but the vibrations of their mother's purring is a physical signal that the kittens can feel. It acts as a homing device, signaling them to nurse. Kittens begin purring at about one week old; then it's a signal to the mother cat that they're getting their milk and are content. Since purring is non-vocal, it doesn't interfere with the suckling. Contrary to another popular belief, cats don't purr purely for pleasure. Be alert: a deep purr can indicate that a cat is in pain or distress. Female cats will purr when in labor. Cats may purr in fear or anxiety. They will also purr in anticipation of being fed or stroked. Big African cats only purr in short bursts, but the house cat can purr for hours. Curiously, scientists tell us that a cat never purrs when alone.

Why do cats act as if they were born to be stroked?

Cats carry many of their kittenhood memories into adulthood. They respond to our stroking because they see us as a substitute for their mothers. They interpret our stroking as if they were being groomed by their mother's tongue as kittens.

Why do cats knead?

That loud purring followed by the sharpening of claws on some soft spot of your body is called "milk-treading." When you relax and sit quietly, you're giving your cat the same signal he got from his mother when he was a kitten - that his mother was ready to let him suckle. A nursing kitten instinctively uses his paws to draw out the milk, gently pushing on his mother's stomach to increase the milk flow. When older cats behave this way, it's a good sign that they're happy, content, and probably recalling their kittenhood.

Why do cats get stuck in trees?

Their claws are constructed for climbing up. When they attempt to climb down headfirst (and normally this is what they will try to do first), it's impossible for them because the claws are curved the wrong way. Eventually, a cat will figure out how to go down the correct way - shimmying down backward so that the claws will cling to the bark of the tree.

Why do cats torture their prey?

Because humans look at hunting as either a sport or cruelty, we overlook the fact that the cat is a natural born hunter possessing a marvel of cunning and skill. Cats who have to live off their catch will kill and eat what they catch immediately. House cats, regardless of the fact that they are domesticated, may hunt but do not kill because they aren't hungry. Most house cats are never trained by their cat mothers to hunt and kill swiftly, so the kill becomes a toy - it moved and was caught by the cat who now regards it as a play object.

Cats are intelligent and fascinating creatures who rarely do something without good reason, even if we don't understand what that reason may be.