All About the Chinese Shar-Pei

The Chinese Shar-Pei has unique characteristics that makes it stand apart from other breeds. 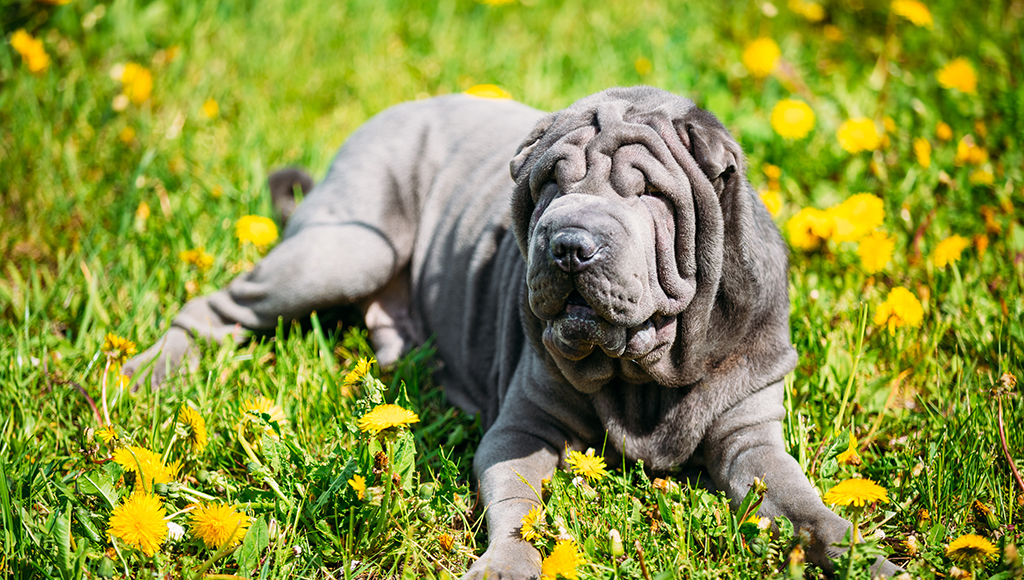 Anyone who’s seen a Shar-Pei, can tell you how irresistible their wrinkled faces are. They are certainly unique with their fat, round, hippo-like faces and deep, soft wrinkles. The Shar-Pei’s history is one of nearly being destroyed by the Chinese Communist regime. It was only through the Herculean efforts of a handful of breeders in Hong Kong and some Americans intrigued by the look of these unusual animals, that they exist today.

The Shar-Pei is an ancient breed from an ancient land, perhaps related to the smooth-coated Chow Chow and the Tibetan Mastiff. The breed developed in the southern provinces of China as a working companion of farmers and peasants who needed a cattle herder, guardian, and hunting helpmate. Most people are unaware that the Shar-Pei  with his loose skin, nettlesome coat, and small ears which protected him in fights, are unfortunately characteristics that originally gained him favor as a fighting dog.  However, during the Han Dynasty some 2000 years ago, traders opened China to the West and to mastiff-type dogs that outweighed the Shar-Pei and attracted the attention of fight promoters, so the breed's fighting career was cut short. The Shar-Pei returned to his peasant roots to guard hearth and home for several centuries. After World War II, Communism took over in China, and dogs were considered a luxury that took food from the mouths of babes. Taxes on pets thinned their ranks, and by 1950, the breed was in big trouble.

Somewhere along the way, a few breeders in the British colony of Hong Kong acquired a few of these Chinese Fighting Dogs. Matgo Law was one such fancier of the wrinkled dogs, and in 1973 he and fellow breeder C.M. Chung began a campaign to save the breed with a plea for help in Dogs magazine. Americans responded wholeheartedly and almost too well -- the Shar-Pei became a fad in the early years in the US, with pups selling for thousands of dollars and breeding done without concern for temperament, health, or structure.  A handful of Shar-Pei  came to the US prior to Law's effort, but the breed was neither promoted nor developed. Chung and Law received more than 2000 responses to their appeal, and they began to send puppies to selected breeders in this country. Several of these early breeders formed the Chinese Shar-Pei Club of America to form a breed standard and work together to preserve the breed.

Want to learn how to save on your Chinese Shar-Pei's veterinary care? Click here
Want to check pricing and try our veterinary discount program, risk-free? Click here

The Chinese Shar-Pei gained entrance to the American Kennel Club miscellaneous group in 1988 and became a full-fledged member of the non-sporting group in October, 1991. The breed’s numbers have increased substantially from that first cry for help; in 1994, more than 15 thousand individuals and 6600 litters were registered, placing the dog 25th in popularity of 137 breeds.

The Shar-Pei is a compact, square, muscular dog with a blocky head, tiny ears that lie against the head, and a short, curled tail. An adult weighs 40-55 pounds and is 18-20 inches at the highest part of his back. He has a deep chest, a top-line that dips slightly behind the shoulders and rises slightly over the hips. His feet are compact and the bones in his feet  are strong and flexible for shock absorption when he moves.

The Shar-Pei walk is strong and balanced, with plenty of rear-end drive and forehand reach. Its coarse, bristly coat gives him his name: Shar is a gritty type of sand, and Pei is Chinese for dog. The distinctive coat comes in three types -- horse, brush, and bear. The horse coat is very short and harsh; the hair is straight and stands off from the body and can cause an irritating rash in some people. The brush coat is longer than the horse coat, but is just as harsh. The hair should be no longer than one inch at the withers. The dog can increase the nettle effect of this coat by raising his hair on the back of his neck when alert or excited.

The Shar-Pei's wrinkled skin is a curious trait, most likely fixed in the breed because it protects the dog from injury by human or animal attackers. A mouthful or handful of prickly folds of skin is likely to discourage an adversary.  Wrinkles vary from line to line in the breed. Puppies are more wrinkled than adults; when the dog is full-grown, the heavy folds are gathered on the head, neck, and back of shoulders. Loose, saggy skin is less obvious in adult dogs.

The Shar-Pei must be solid-colored to show in the breed ring, but piebald (pinto) dogs are sometimes seen. Colors include fawn (from light beige to golden tan); cream, black, red, chocolate, sable (hairs of two colors, one dark, one light), apricot, a dilute shade of red, and silver, a dilute shade known as blue in other breeds. Darker shading is acceptable on light colors.

The Shar-Pei is dignified, calm, and confident, aloof with strangers, and a bit arrogant. He can also be a quite a clown with his family. These characteristics can make the Shar-Pei difficult to train unless he is well-socialized as a puppy and taught early that the human word is law in the household. Once convinced of your superiority, the Shar-Pei will accept his place in the order and be a dependable, devoted companion and child's playmate. Although he is considered a consummate watchdog, the Shar-Pei should never be aggressive to people or other dogs.  This is a people-oriented breed, so when looking for a pup, make sure the breeder has given her dogs plenty of human contact.

Want to learn how to save on your Chinese Shar-Pei's veterinary care? Click here
Want to check pricing and try our veterinary discount program, risk-free? Click here

The wrinkly skin and deep-set eyes give the Shar-Pei some health problems that could discourage prospective owners. The breed is susceptible to entropion and actropion, two malformations of the eyelids. Ectropion causes the lid to turn outward, exposing the eye to irritation and injury. Entropion rolls the eyelid inward, causing irritation from lashes. Untreated, the lashes can cause ulcers on the eye. Both conditions can be corrected by surgery.
Various mouth and ear problems may also occur in this breed. Tiny ear canals and folded ear flaps limit air circulation in the ear and can lead to infections. Ear odor and shaking the head or pawing at the ear are indications of infection; owners should check ears frequently so that these symptoms don't get started. Tight lip causes the lower lip to roll over the lower teeth and can lead to an overshot jaw, and an elongated soft palate can cause breathing or eating problems. Both can be corrected by surgery.

Shar-Pei is also susceptible to inhalant allergies and fleas, causing dermatitis or skin irritation, which becomes infected as the dog licks, scratches, and bites at his skin. Skin infections or pyodermas are difficult to control in the folds of Shar-Pei skin. The horse-coated variety is more susceptible to these skin conditions. Demodectic mange is also a problem in this breed. Although most dogs normally carry a complement of demodex mites, a few breeds appear to be susceptible to severe infestations that cause hair loss and skin sores. Demodex can be difficult to treat as the infestations recur in young dogs with immature immune systems. There is some thought that susceptibility to demodex is inherited as it seems to be connected to compromised immune systems. When looking for a Shar-Pei puppy, be sure to ask the breeder if she x-rays breeding stock for hip dysplasia, for it, too, is a problem for this breed.