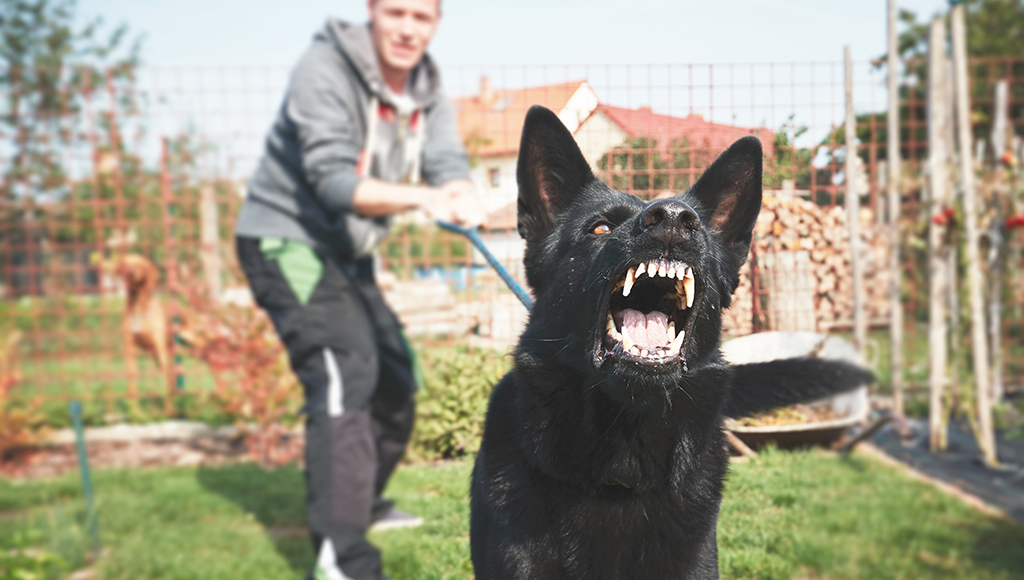 Aggression in dogs is the most serious behavior problem that pet owners must deal with, and it is largely preventable if the owner understands canine growth periods and the factors that can influence the development of aggressive behavior.

Health authorities report that more than one million people are bitten each year, but this number probably represents only half the actual bites; the rest go unreported. Although many bite wounds are minor, experts have reported that bites account for one percent of all emergency room admissions and cost about $30 million in annual health care. At least half of dog bite victims are young children, usually under 10 years of age.

Knowledge of the early growth periods of dogs is helpful in understanding canine aggression. Puppies have a critical need for socialization from as early as three weeks of age, when they can see and hear, until 14 weeks of age. It’s a good idea to purchase a puppy between seven and eight weeks of age for proper socialization in the new home. Eight to 10 weeks is a fearful period, during which the puppy must not be harshly disciplined and must be handled gently by adults and children.

Fourteen weeks starts the juvenile period -- the dreaded adolescence -- that ends when the pup achieves sexual maturity, usually at about 14-15 months of age. If a puppy has not been socialized by the time he is 14 weeks old, he may never be trustworthy around people or other dogs.

Puppies raised in kennels where they receive very little human handling will often remain shy of people, particularly if they are not sold prior to 14 weeks of age. They may always be fearful, especially under stressful conditions.

Dogs reach sexual maturity at six to 14 months of age. During this period, they usually begin to bark at strangers and become more protective, and males begin lifting a leg to urinate. Introduction to strangers (adults, children, and other dogs) on the home property during this period is important as well, especially if the pup has missed out on early socialization.

Genetic and hereditary factors do play a major role in aggression. Protective breeds such as Dobermans, Akitas, and Rottweilers are expected to be more aggressive than Golden Retrievers and Labrador Retrievers. Feisty terriers were bred to kill small game, and this breed still retains this characteristic today.
There are several factors that can contribute to unstable temperaments and aggressive tendencies in dogs:

Want to learn how to save on your dog's veterinary care? Click here
Obviously, dogs are not people. They have a pack order that determines their social rank, a pack order that is established and maintained by body language. Some dogs occupy dominant or alpha status, and some have low rank or omega status. When dogs live with people, they look at humans as members of the pack and try to establish their place in the social order by challenging the more submissive family members, particularly the children. If dogs display a dominant gesture such as growling while guarding the food dish, and they are not corrected for this behavior, they have established a measure of dominance on which to build with any or all family members. If these dominant gestures remain uncorrected, the dog slowly but surely gains in status over one or all family members.


The subtle signs of dominance usually go unnoticed or are explained away until the dog bites a human for infringement on his alpha position. The owner misunderstands the progression of behaviors and blames the dog for biting "for no reason." These dogs frequently end up at animal shelters and are destroyed because their owners misunderstood the development of aggressive behavior.

There are several types of aggression: defensive or induced by fear, pain, or punishment; dominant; possessive; territorial; intra-sexual (male-to-male or female-to-female); predatory; or parental. A dog may exhibit more than one type of aggression.

Dominant-aggressive dogs are characterized as confident and macho. They stand tall, up on their toes, with their ears up and forward. They carry their tails high and wag it slowly and stiffly from side to side. They often have their hackles up, stare menacingly, and emit a low growl with lips pursed and teeth exposed. They will place a paw on the shoulder of another dog, mount people's legs, and push children aside when going through a door. Dominant-aggressive dogs are demanding of attention. They demand to go outside, demand excessive affection, are possessive of their sleeping areas, and stop eating when approached. Many of these dogs will not obey commands, especially submissive commands (such as "down" or "wait"). Males lift their legs on everything, even in the house, even if their bladder is empty. Most dominant-aggressive dogs are purebred males.

Defensive-aggressive dogs are much more ambivalent in their behavior. They display submissive body language (ears back, often flat against the head; avoidance of direct eye contact; lowering of the head and body; tucking tail between the legs; submissive urination) and they lick hands and roll over to expose their bellies. They resist handling, hate to have their feet touched, don't like to be groomed, and often shy away from human hands. These are the fear-biters; they may snap if cornered and will often bite at people who turn and walk away.

Help Your Pet Get Over Ear Infections Fast

Impact of Obesity on Cats and Dogs