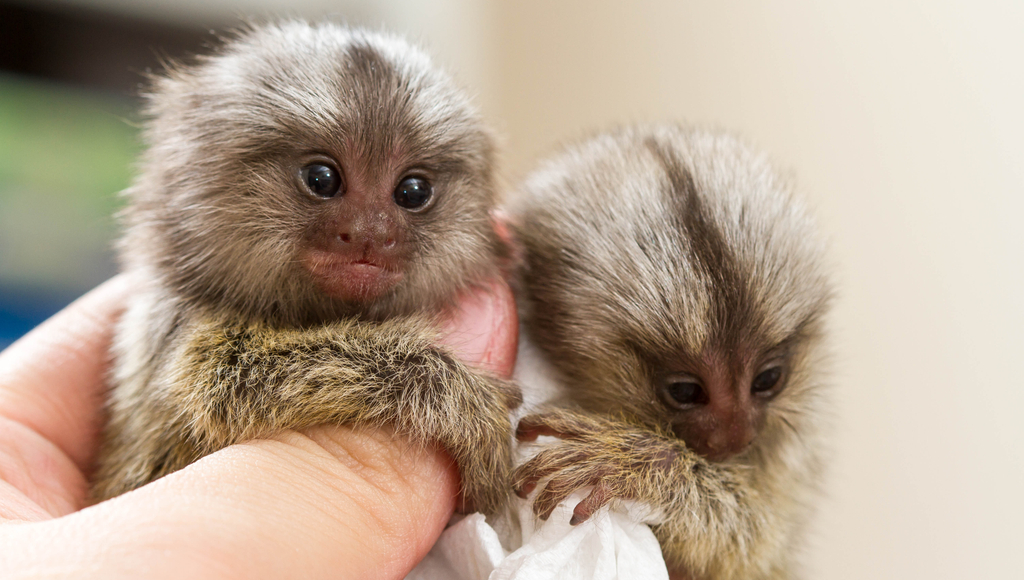 Exotic pets are popular and controversial. Experts warn against keeping any type of wild animal as a pet, but with no federal restrictions, many states allow it. A recent trend with exotic pet owners is the finger monkey, native to countries including Colombia, Brazil, Ecuador, and Peru.

What is a "Finger Monkey"?

As the name implies, these adorable animals are true monkeys. They’re the smallest species of monkey and one of the smallest primates in the world. Their official name is the pygmy marmoset. Like other marmosets, they live high in the treetops of South American rainforests. All marmosets are relatively small, but the pygmy grows no longer than 4.6 to 6.2 inches, not including its tail, which can measure between 6.9 and 9 inches. Females tend to be slightly larger than males, weighing just over 4 ounces on average. Baby pygmy marmosets are tiny enough to cling to your finger, much like other monkeys cling to tree branches; hence the nickname.

They are also sometimes referred to as thumb monkeys, pocket monkeys and little lions, the latter due to the fur that surrounds their heads like a mane. Although not considered an endangered species, finger monkeys do face habitat destruction. Their adaptability to new environments may keep them off the endangered list.

The Life of a Finger Monkey

Finger monkeys are social creatures that, in the wild, live in small groups generally made up of an adult male, adult female, and their offspring. The groups range from as few as two to as many as nine or ten individuals. Females can give birth twice a year and normally produce twins each time, although single or triple births do occur. The males carry and care for the newborns for the first two weeks of life. While the species tends to be monogamous, groups may feature an additional male for assistance in newborn care. Juvenile finger monkeys also contribute to the care of babies.

In nature, finger monkeys average a 12-16-year lifespan. In captivity, that range spikes to 15-22 years. Research suggests as few as one-fourth of all babies born in the wild make it to maturity, with most succumbing to falls from trees or from the group member who is carrying them.

These tiny creatures have long, sharp nails that resemble claws more than the flat nails of other primates. These allow them to support themselves vertically on trees while using their long, narrow teeth to feed on sap. Finger monkeys also consume the resin, gum, and vines of trees. Small insects, butterflies, spiders, and fruit round out their diet.

They can rotate their heads up to 180 degrees to scan for danger and leap up to 16 feet to escape it. Their natural predators include snakes, cats, and raptors. They use their leaping ability along with vocalizations, group attacks and even freezing in place to fend off intruders.

Finger monkeys are active during the day, rising just after dawn unless the day is cloudy or rainy. They spend their time feeding, foraging, grooming, and playing. After their second feeding time, the group moves back to their sleeping area, or roost. The roost is normally a bundle of vines but sometimes is made up of tree holes.

Now that you have some background on finger monkeys, what should you consider when deciding whether to get one as a pet? The first thing you should check is if it's legal to have primates, and specifically monkeys, as pets in your state. More than half of all states and the District of Columbia outright prohibit the private ownership of monkeys or allow it only with a specific license, permit or exemption issued by the government of the state, county, or municipality.

These tiny marmosets gained popularity as pets in the United States due to their diminutive size and cute faces. However, they are still wild animals. As mentioned above, they use their long teeth to bore into tree bark for food. This makes their bite painful, although not generally dangerous, especially to children and other pets. Finger monkeys are known to be aggressive, particularly males as they reach maturity. As with other monkeys, they're known to throw their feces when they get angry.

How to Care for Finger Monkeys

These are intelligent animals and their first couple years of life leave a major imprint. Good and bad habits developed during this time will stay with them for life, so you must devote considerable time to training when they are young.

Replicating their natural habitat in captivity is essential. A large cage featuring trees, vines, water, and swings allows them to jump, climb and play as they would in the wild. Direct sunlight is preferred, but a heat lamp or other artificial light source can be attached to the cage if natural light isn't regularly available. Some breeders will include a "starter" cage kit when you purchase a finger monkey. Provide for their diet through access to trees, fruit, vegetables, and insects. Babies need to be fed every two hours.

You should buy or adopt finger monkeys in pairs, at a minimum. Even ample human companionship is not enough to keep these social animals mentally fit. Having same-species camaraderie is essential to their well-being. They are also susceptible to human diseases including colds, chicken pox and HIV. Get a guarantee from the breeder that your monkeys are healthy. Before deciding to bring one home, find out if there is a veterinarian in your area who specializes in primates. A general vet cannot properly treat these animals.

How Much Do Finger Monkeys Cost?

The initial investment in a single finger monkey, including the necessary cage and supplies, is between $1,500 and $8,000. Keeping finger monkeys as pets is costly in money, time, attention, space, and research. It's not an undertaking you should enter into lightly.