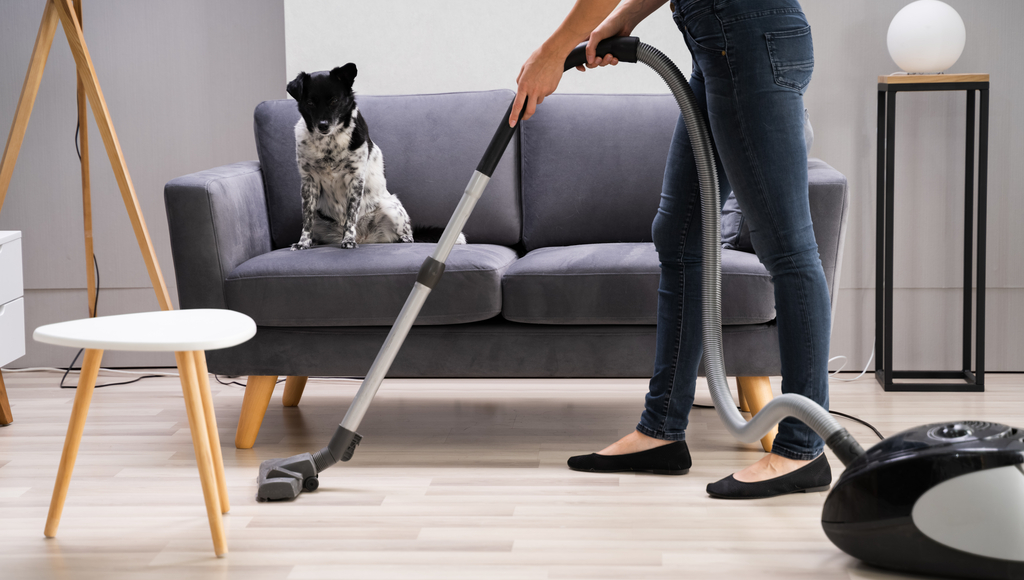 I'm curled up in bed or cuddling with my human on a cozy rainy night when suddenly there are scary rumbling noises outside. They usually happen after bright flashes in the sky.

Sometimes the loud noises happen on a clear night instead, usually when the weather's warm and after my humans spent the day barbecuing yummy smelling-food and waving flags with stars and stripes on them.

And then, there's the worst one of all:

The machine of doom.

Once a week or so, my human walks around the house pushing this large device, letting it gobble up crumbs, dirt, and even my own fur from the floor!

My humans say these horrible things are called vacuums. (Do all houses have these?!) Other things that frighten me are called fireworks, thunder, sirens, alarms, and garbage trucks. I don't really know what all these noisy things are, but I know one thing for sure: I'm terrified of them!

Woof! This is What I Do When I Hear Loud Noises

Whenever I hear the machine of doom or thunder, my heart starts to race and I start panting. Because I'm so scared, I usually start to drool, yawn, tremble, or shake my whole body. Sometimes I even hide in the bathtub!

When a loud truck goes by the house, I always make sure to bark back at it. I have to protect the house from this loud scary machine and keep my humans safe. I'll also make sure to pace around the house until I'm sure the truck is gone.

I'll never forget the first time I heard fireworks though...

BOOM. CRASH. POP POP POP. What was that?! I remember thinking. I got so scared and confused that I hid in the bathtub for two hours and spent the whole time chewing and licking at my paws. They were so sore after! I'm embarrassed to admit, but I even threw up a little bit because I was so nervous.

Fortunately, I haven't had that much of an over-the-top response since. But according to my vet, it's really important for my humans to help me not be so afraid of loud noises. She told us that unless I get some good dog training my fear could actually get worse, which could make me do things that are unsafe—like run away, destroy things in the house, hurt myself, or even hurt people. I don't think I'd ever bite one of my humans, but I know sometimes I have the urge to growl and show my teeth when I'm feeling really scared.

So, maybe my vet is right. I definitely don't want to hurt myself or my humans, and as much as I'm tempted to chew on the table legs and eat trash, I don't really want to do those things either.

Whenever I get scared after hearing a loud noise, my humans feel so bad for me. Usually, they end up giving me lots of extra snuggles, treats, and praise. It actually kind of confuses me, because I think they're rewarding me for being a scaredy-cat.

Then my vet told them to stop being so coddling and treating me like a little puppy, because this could actually make me "learn" how to keep being scared.

On the advice of the vet, my humans have started doing lots of other things to help me not be so afraid when loud noises come around. For example, my humans now give me treats and cuddles and scratches when I start acting more calmly and stop pacing, panting, and barking. They also covered my crate with a heavy blanket. I LOVE this! It makes my crate feel like a cozy and safe little den where I can relax. Plus, it muffles the noises a bit.

The other day when it started getting stormy out, my humans came over and started playing fetch with me. I love that game! I was so focused on the game and so happy to play that I didn't even notice the thunder! By the time I did hear a few loud booms and started getting a little scared, they stopped playing with me. I remember hearing my vet tell them to stop playing with me as soon as I started behaving like I was scared. Otherwise, I might start to associate fun games like fetch with the scary feelings I have when I hear thunder.

There's one other weird thing my humans have started doing ever since they asked the vet about how to help me be less afraid of loud noises. They've started playing noises that sound just like the things I don't like, including a truck, the machine of doom, and thunder. First, they play the sounds so low I can barely hear it. Then they make the noises louder and give me a little treat. As long as I don't look or act afraid, my humans will keep turning the noises up and giving me treats. It's weird, but I think it is actually helping me get used to the sounds.

My humans say it's normal for dogs and noises not to always mix. I'm thankful they're trying to help me be less afraid! And I may never love the machine of doom...but at least it won't scare me forever.