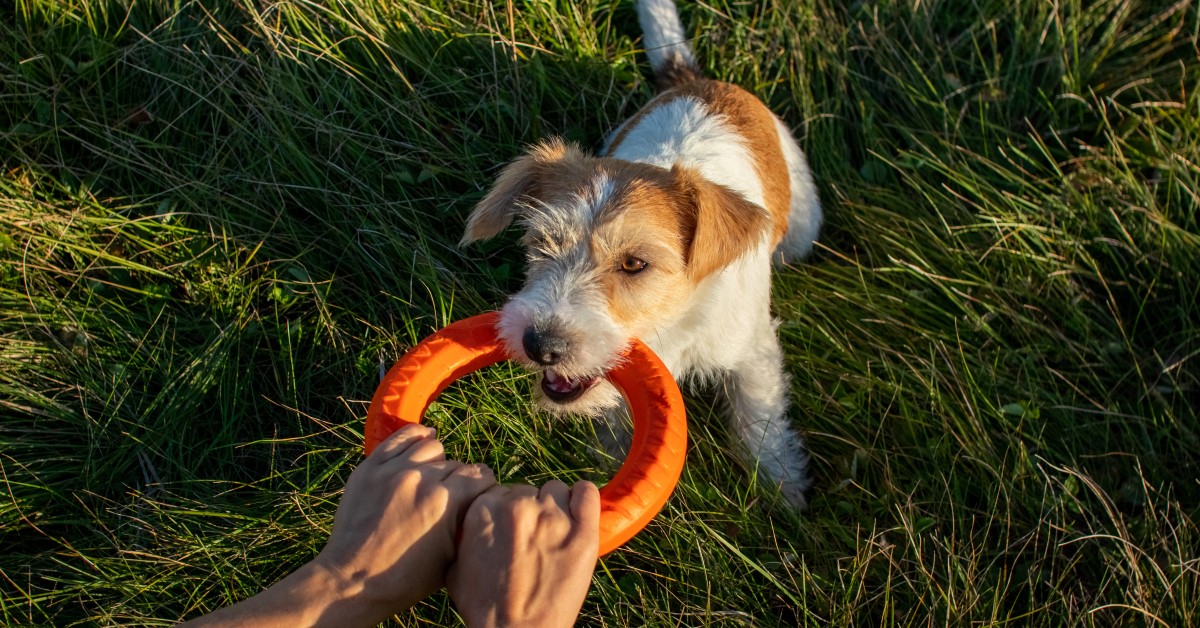 Dogs need an outlet to release their pent-up energy. Tug toys encourage canines to grab, run, chase, tug, and play to achieve simultaneous physical and mental exercise. Some of the best tug-of-war toys are constructed of durable materials, such as rope, rubber, or bungee cord. Many are designed to be held by a human while the dog pulls from the opposite end. However, you can also find tug toys that can be tethered to a surface, such as a floor or a tree, to allow your dog to play independently.

Types of Tug Toys for Dogs

Tug toys can be found in a variety of shapes, sizes, and designs. While nearly any toy will keep your pet entertained during playtime, you will often find that dogs form favorites. Some of the most popular types of tug toys for dogs include the following:

Benefits of Tug Toys for Dogs

1. Tug Toys are a Great Form of Exercise

How much exercise a dog requires is dependent on several factors, such as the animal’s age, breed, health, and lifestyle. However, the consensus is that most dogs can benefit from daily exercise. A game of tug is a simple way to engage in meaningful play with your furry friend and can be mentally and physically challenging for the dog. A study released by Bristol University found that dogs who don’t engage in adequate play often suffer from behavioral issues, such as aggression and anxiety.

2. Interactive Play Helps Form a Bond Between Dog and Human

Playtime is not just good exercise for pet owners and their dogs but can also help them achieve a closer bond. Become an active participant in playtime, and your dog will likely feed off your excitement and become closer to you. When playtime is incorporated into a dog’s daily routine, it can also build a sense of trust between dog and human.

3. Tug Toys Can Be Useful in Redirecting Mouthing Habits

Dogs use their mouths to explore the world around them. Mouthing behaviors develop when dogs continually put their mouth and teeth over a person’s skin using little to no pressure from the jaw. This behavior is quite common in puppies and usually resolves itself as the dog grows older. However, this isn’t always the case. Tug toys can be used as positive reinforcement to help redirect your dog from mouthing you or other items in the home that are not appropriate to chew.

4. The Use of Tug Toys Can Aid in Dog Training

The proper use of tug toys can help pet owners gain better control over their pets and their behaviors. Tug toys can be valuable teaching tools that encourage your dog to learn bite inhibition, impulse control, and vocal commands like “stop” or “drop it.” Dog training does not have to be a chore when games are incorporated. Have fun with your pet while helping your dog learn new tricks.

Many pet owners will often find that their shy or timid dog will come out of its shell when presented with the right toys. Tug toys, in particular, can help distract your pet from its environment and promote a healthy challenge. Pulling on a tug toy can release nervous energy and help your dog become more self-assured. Despite common misconceptions, tug toys do not encourage aggression. Instead, they offer enrichment opportunities.

The Rules of Tug

A game of tug can be beneficial to both dogs and their human companions. However, you want to play tug with a few rules in mind:

Many dogs enjoy an occasional game of tug-of-war and this activity can also provide your pet with a plethora of benefits. It can help strengthen the bond with your pet, relieve excess energy, and reinforce obedience commands. Best of all, it’s plain fun!