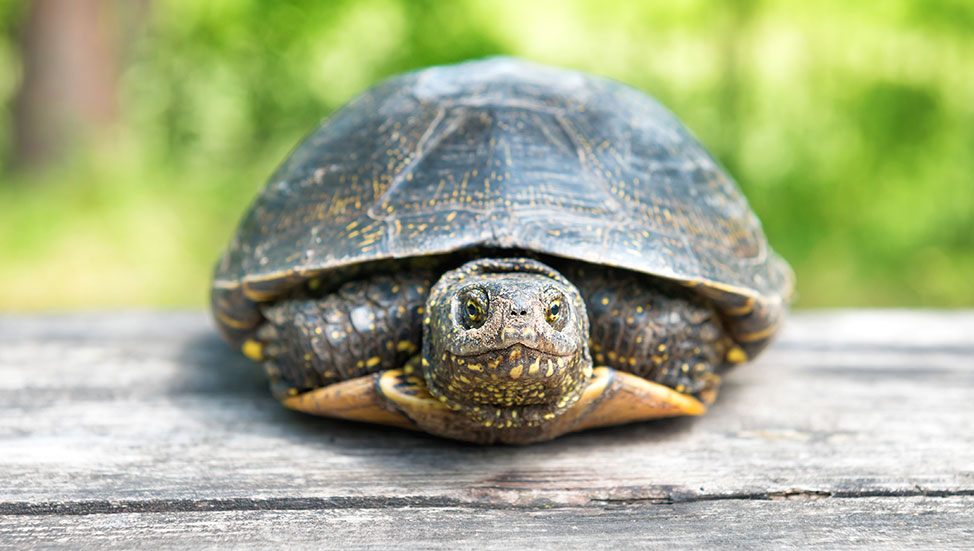 The answer to the trivia question is partially true. A turtle’s shell is made of multiple layers, each with a unique composition and purpose. The outermost portion of a turtle’s shell consists of large scales called scutes. The scutes are similar to human hair in that both are composed of a material called keratin. Keratin tissue is dead – meaning it doesn’t contain a blood supply and does not have nerves to feel pain or other sensations. Human fingernails may be a better comparison than hair. Fingernails are also composed of keratin with a shape and hardness similar to a scute.

Below the scutes are reptilian skin. This is the same skin that is found throughout the rest of a turtle’s body, including the head, feet, and tail.

As a turtle grows, his shell grows with him, much as our skeleton grows as we grow. As he grows, he will go through periods of molting where the scutes shed individually. It looks like a portion of the shell is peeling off. A new and larger scute develops underneath as the old scute sheds.

A turtle may also shed his scutes if they are covered in algae, become damaged, or infected. Turtles are cold-blooded. They bask in the sun to warm up their internal body temperature. If the scutes are damaged or covered in algae, this can block the absorption of heat from the sun. In response to this, the turtle’s body will shed the damaged scute and form a newer healthier one.

Many have pondered the age-old question “If a turtle loses his shell, is he naked or homeless?” The scientific answer is that if a turtle loses his shell, he is dead. The shell is so much more than a house a turtle carries with him to provide protection. It is part of his skeleton and his skin. It protects his vital organs including his heart, lungs, and digestive tract. Muscles attach to the shell so that he can move. He absorbs heat from the sun through the shell. Without its shell, a turtle cannot survive.

What Types of Reptiles Make the Best Pets?

Read More There's a Dragon in Your House!