His lighthearted and entertaining personality is sure to steal the heart of everyone he meets. 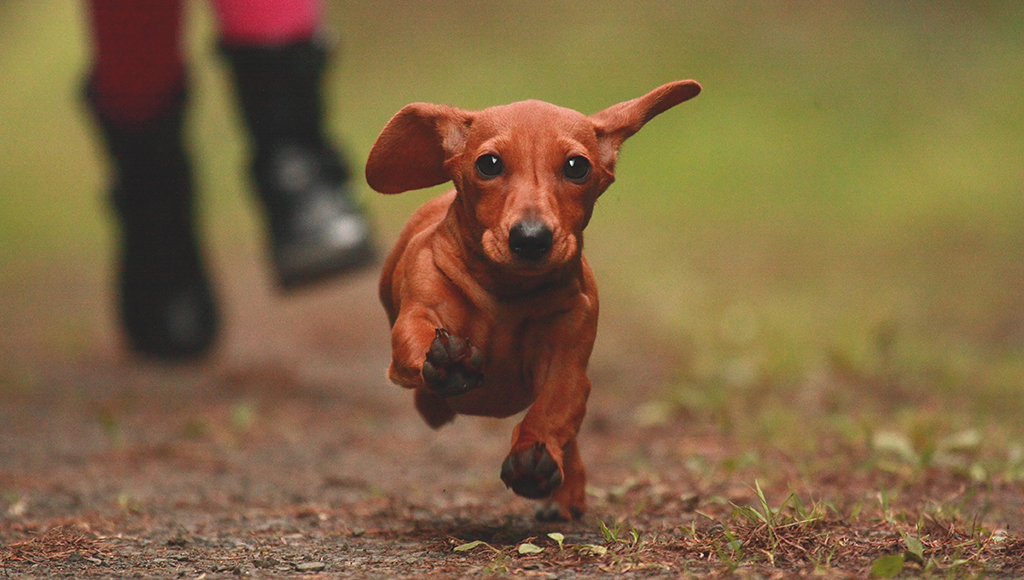 The Dachshund is an all around friendly, and very outgoing dog. His lighthearted personality is sure to steal the hearts of everyone he meets.

The Dachshund is a short-legged, elongated dog breed, and member of the hound family. The standard size was developed to scent, chase, and flush badgers and other burrow-dwelling animals, while the miniature was developed to hunt smaller prey, like rabbits. In the American West, Dachshunds were also used to hunt prairie dogs.

The name "dachshund" is of German origin and literally means "badger dog". While classified in the hound group or scent hound group in the United States and Great Britain, there are some who consider this classification to be misleading, speculating that this arose from the fact that the word "Hund" is similar to the English word hound, while the word "Dachshund" has even been anglicized as "Dash Hound".

The typical Dachshund is long-bodied and muscular, with short and stubby legs. Its paws are unusually large and paddle-shaped, for efficient digging. Dachshunds have skin that is loose enough not to tear while tunneling in tight burrows to chase prey. The Dachshund has a deep chest to allow enough lung capacity to keep going when hunting. The snout is long with an increased nose area that absorbs odors. Due to the long, narrow build, these dogs are sometimes referred to as a wiener dog or a sausage dog.

The Dachshund is well-balanced with bold and confident head carriage and intelligent, alert facial expressions. The head is elongated, and their skull is slightly convex, with a long muzzle which features a robust set of jaws. Their teeth close in a scissors bite and their oval-shaped eyes are usually dark in color. Dachshunds can have a blue and a brown eye. Blue eyes, partially blue eyes, or a blue eye and a brown eye are called "wall" coloring, and are considered a non-desirable trait in kennel club standards. Dachshunds have arched prominent eyebrows and long ears that are mobile and hang toward the cheeks. His hunting spirit, good nose, loud tongue and distinctive build make him well-suited for below-ground work and for beating the bush.

Dachshunds exhibit three coat varieties: smooth coat (short hair), long hair, and wire-hair. This breed has a wide variety of colors and patterns. Dachshunds can be single-colored, single colored with spots ("dappled"), and single-colored with tan points plus any pattern. Dachshunds also come in Piebald. The piebald has a white background with various shades of brown. The dominant color is red, the most common along with black and tan. The Dachshund is naturally free from "doggy" odor.

Dachshunds come in three sizes: standard, miniature, and kaninchen, which means "rabbit". Although the standard and miniature sizes are recognized almost universally, the rabbit size is not recognized by clubs in the United States and the United Kingdom.

A full-grown standard Dachshund averages 15 - 28 lbs., while the miniature variety normally weighs less than 11 lbs. The rabbit size weighs 8 - 10 lbs. According to kennel club standards, the miniature (and kaninchen, where recognized) differs from the full-size only by size and weight, thus offspring from miniature parents must never weigh more than the miniature standard to be considered a miniature as well.

Want to learn how to save on your dachshund's veterinary care? Click here

The breed is known to have spinal problems, especially intervertebral disk disease (IVDD), due in part to an extremely long spinal column and short rib cage. The risk of injury may be worsened by obesity, jumping, rough handling, or intense exercise, which places greater strain on the vertebrae. Serious cases may require surgery to remove the troublesome disk contents. In addition to back problems, the breed is also prone to patellar luxation which is where the kneecap can become dislodged.

The Dachshund is a lively breed with a friendly personality and keen sense of smell. A very intuitive dog, the Dachshund is now most commonly seen as a companion rather than a hunter. They have a loud bark and without proper training they can become nuisance barkers. Dachshunds are known for their devotion and loyalty to their owners; however, though they can be standoffish towards strangers.

If left alone, many Dachshunds will whine until they have companionship. Like many dogs, if left alone too frequently, some Dachshunds are prone to separation anxiety and may chew objects in the house to relieve stress. The Dachshund's temperament may vary greatly from dog to dog. Long-haired dachshunds have a calmer, intelligent character inherited from the spaniel. Wire-haired dachshunds have much of the terrier's spunky personality.

They are an active breed, both outdoors and indoors, and they enjoy going for walks and playing in the park. They are perfectly happy without a yard, but they should be given at least a bit of exercise per day. They're a long-lived breed, which can live up to 16 years or more with proper care. Because they are such social creatures, they don't do well as outdoor dogs, needing and wanting to be with their human companions.

The Dachshund is clever, lively and courageous to the point of rashness; often seeming oblivious to their small size, when exploring or confronting another dog or stranger. Many Dachshunds do not like unfamiliar people, and may growl or bark at them. This behavior is such that it is not the dog for everyone. A bored, untrained Dachshund will become destructive. If raised improperly and not socialized at a young age, Dachshunds can become aggressive or fearful. This breed requires a caring owner who understands their needs for entertainment and exercise.

Dachshunds may not be the best pets for small children. Like any dog, Dachshunds need a proper introduction at a young age. Well trained Dachshunds and well behaved children usually get along just fine; otherwise, they may be aggressive and bite an unfamiliar child, especially one that moves quickly around them or teases them. Don't be discouraged; , many Dachshunds are very tolerant and loyal to children within their family, but these children should be mindful of the vulnerability of the breed's back and not carry them around roughly as they are somewhat delicate.

Dachshunds can be difficult to housebreak, and patience and consistency is often needed in this endeavor.

Ask Dr. Jenn: Why does my dog drag her back end across the carpet?